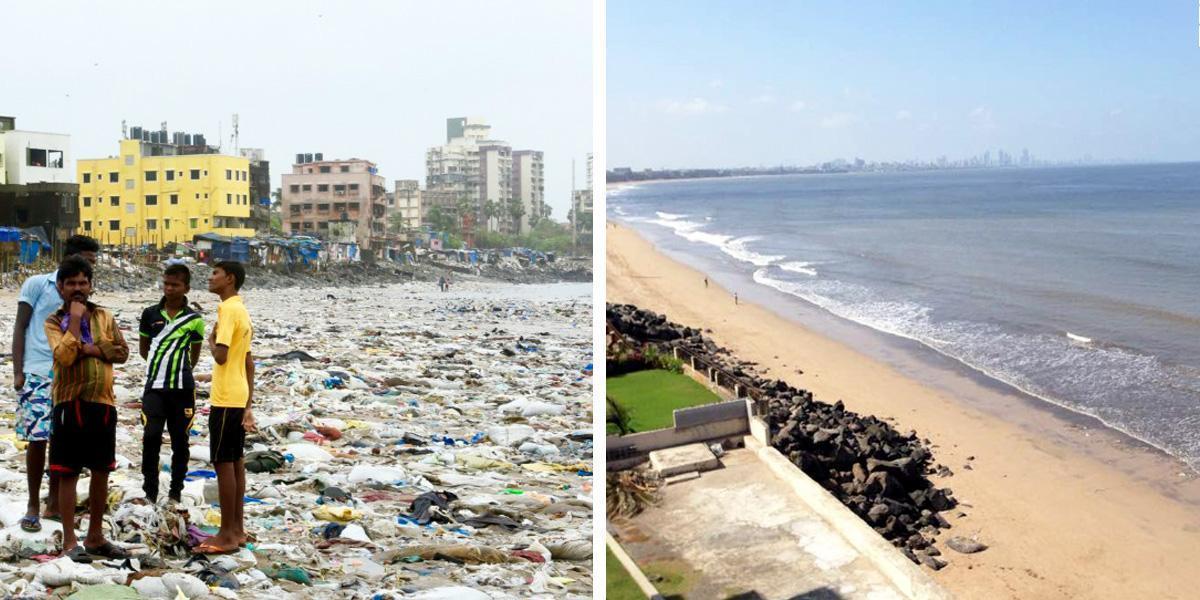 A lot of people take part in community clean-up efforts—spending a Saturday morning picking up litter in a park, mowing an overgrown field or painting a fence.

But not everyone has the drive to do what a young lawyer and environmentalist in Mumbai recently accomplished.

In 2015, Afroz Shah moved to an apartment near Versova beach, an ignored strip of ocean near slums. He was shocked by the pollution that he saw—the beach was covered in rotting garbage. Nobody could walk along the beach, let alone swim in the water, without being assaulted by the smell.

“[The plastic] was 5.5 feet high. A man could drown in the plastic,” Shah told CNN. “I said I’m going to come on the field and do something. I have to protect my environment and it requires ground action.”

At first, Shah and his neighbor, an 84-year old man, would go out and pick up as much trash as they could.

After a while, Shah realized that he had to expand his team if he was going to make a dent in what was essentially an environmental crisis. He began knocking on doors and talking with local residents, explaining the harm caused by marine pollution. His determination inspired a lot of people and soon dozens, hundreds and eventually more than a thousand volunteers from all walks of life pitched in.

Cleanups were ironically called “dates with the ocean,” because they were really arduous affairs, “shin-deep in rotting garbage under the scorching Indian sun,” according to the UN.

Global Citizen reported on the 33-year old lawyer’s efforts last year, but his volunteer organization, Versova Residents Volunteers, was only half-way through with the massive undertaking, which is being hailed as the “world’s largest beach clean-up effort.”

Now, after 21 months of toil, they picked up 11,684,500 pounds of trash, most of it plastic, that had accumulated along the shoreline. They also cleaned 52 public toilets and planted 50 coconut trees.

For his vision and hardwork, the UN awarded him the “Champion of the Earth” award.

“I am an ocean lover and feel that we owe a duty to our ocean to make it free of plastic,” he told the UN. “I just hope this is the beginning for coastal communities across India and the world.”

This is versova beach an hour back. Week 85 of cleanup.Versova beach is gorgeous and clean now.we have done our bit.We need to maintain it. pic.twitter.com/98q9RD5aAg

Shah’s work didn’t end with the last piece of trash picked up, either.

He wants to plant thousands of coconut trees to return the beach to the lagoon it once was and he now works to limit the amount of garbage that makes it to the beach in the first place, by, for example, building barriers along creeks upstream that carry litter to the beach.

He’s also planning to expand his clean-up effort to the coastline’s mangrove forests, which are similarly infested with garbage. When clean and unobstructed, these forests can act as powerful filtration systems and also form a natural defense against storms.

Shah also hopes to bring grassroots clean-up efforts to other parts of India, inspiring a nationwide awareness of environmentalism. Ultimately, Shah wants to export this mentality throughout the world, cleaning up oceans and ecosystems to create a world that can foster life in all its splendor.

It’s going to be an uphill battle.

Each year, 8 to 13 million tons of plastic make it into the world’s oceans each year—the equivalent of two garbage trucks filled with plastic every minute. Throughout the world, there are about five plastic bags filled with plastic for every foot of coastline. By 2050, plastic could outweigh fish in the oceans.

While companies are to blame for the massive amounts of plastic produced and sold, plastic pollution often happens on an individual level.

But if Shah’s work proves anything, individuals can transform their relationship to garbage.