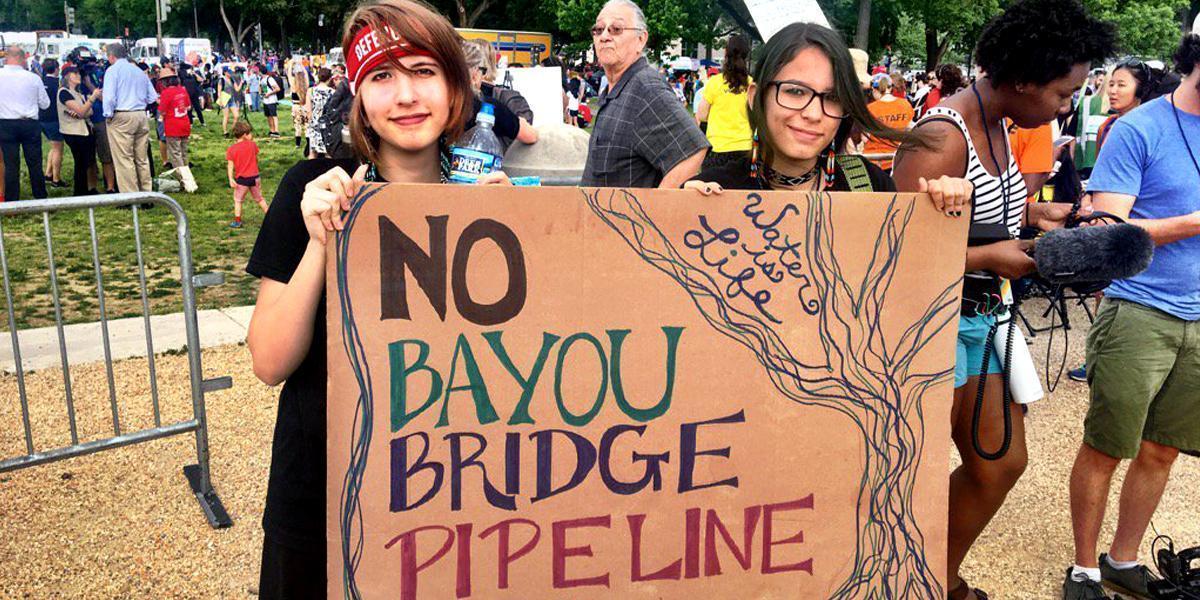 The next big pipeline battle is shaping up in the marshes of southwestern Louisiana.

The standoff at the Standing Rock Sioux reservation against the Dakota Access Pipeline (DAPL) has energized activists in Louisiana, who are trying to keep another crude conduit out of wetlands that Louisianans have fought to restore for decades. The 162-mile Bayou Bridge Pipeline is the last of a network of oilfield arteries that includes DAPL. The project would run from southeastern Texas to a Mississippi River terminal in St. James Parish, west of New Orleans, after crossing the Atchafalaya River basin—a 1.4 million-acre swath of cypress marsh and wetland forest that’s a key rest stop for birds moving north and south along the Mississippi Flyway.

“It’s the largest swamp left in North America and it’s historically the most critical habitat for migratory birds in the entire hemisphere,” said Dean Wilson, executive director of Atchafalaya Basinkeeper. The murky waters of the Atchafalaya are teeming with fish, crawfish and crabs, making them a rich source of food for animals and people alike.

Wilson’s organization is part of a coalition of Louisiana environmentalists seeking to block the pipeline, which includes the Sierra Club’s Delta Chapter. They’re trying to prevent further injury to a state where the oil industry puts food on many tables, but also has inflicted deep and dramatic losses on the landscape. The Atchafalaya watershed is already crisscrossed with thousands of miles of pipe; one more “is one too many,” said Darryl Malek-Wiley, a Sierra Club organizer in New Orleans.

“As an ecosystem, it’s actually more productive than the Everglades, as far as food value,” Malek-Wiley said. “It’s time to focus in on this and move forward in a positive way to protect the area, rather than to put more pipelines across it, which cause sediment backup and disturb the water flow through the basin.”

As an offshoot of the Mississippi River, the Atchafalaya is a major part of southern Louisiana’s flood protection system. In 2011, when rising waters threatened Baton Rouge and New Orleans, the Army Corps of Engineers opened spillways that diverted some of that flow through the basin. It’s also the only part of coastal Louisiana that gained land area over the past several decades, as a combination of sinking land, sea-level rise and erosion accelerated by industrial canals eats away at the rest of the state’s shoreline.

And it’s not just the watershed that would be affected. Opponents say the 24-inch-diameter line would cross about 700 bodies of water, from bayous to backyard wells.

They’re lined up against the state’s powerful oil and gas industry, which employs about 30,000 people and supports tens of thousands more jobs. The area’s Republican congressman and the state’s Democratic governor both support the pipeline. Louisiana’s Department of Natural Resources approved the project in April—and no sympathy is expected from the Trump administration, which reversed its predecessor’s decision to halt the Dakota Access and Keystone XL pipelines across the northern Great Plains.

But the pipeline’s builder, Energy Transfer Partners, still has to get permission from the state Department of Environmental Quality and the Corps of Engineers. Opponents have asked the Department of Natural Resources to reconsider its approval, and argue that the pipeline would piggyback on infrastructure that’s already out of compliance with Corps regulations.

“When you live in places like Louisiana, you always have to be optimistic or you just don’t fight,” Malek-Wiley said.

Texas-based Energy Transfer Partners, which also built the Dakota Access Pipeline, didn’t respond to requests for comment. Supporters say the pipeline will support about 2,500 construction jobs and pump around $750 million into Louisiana’s economy. They also argue that pipelines are the safest way to move oil—far less risky than carrying it by train, where a derailment could lead to a disastrous explosion and fire.

Critics, however, say the industry’s safety and environmental record is terrible, citing more than 140 pipeline accidents in 2016, and an explosion in February that killed one worker and injured two others.

In the years since the Deepwater Horizon blowout fouled stretches of the Gulf Coast, environmentalists have stepped up their opposition to new exploration and infrastructure. They’ve protested and disrupted the Interior Department’s offshore lease sales and are preparing for more protests against Bayou Bridge. They’re hoping to tap into the experience of people who took part in the Standing Rock protests, said Anne Rolfes, director of the environmental group Louisiana Bucket Brigade.

“There are ordinary people here who were moved to go all the way up to North Dakota to experience that and they are very committed to doing that here,” Rolfes said. “People from groups who were very involved up there are helping us figure this out.”