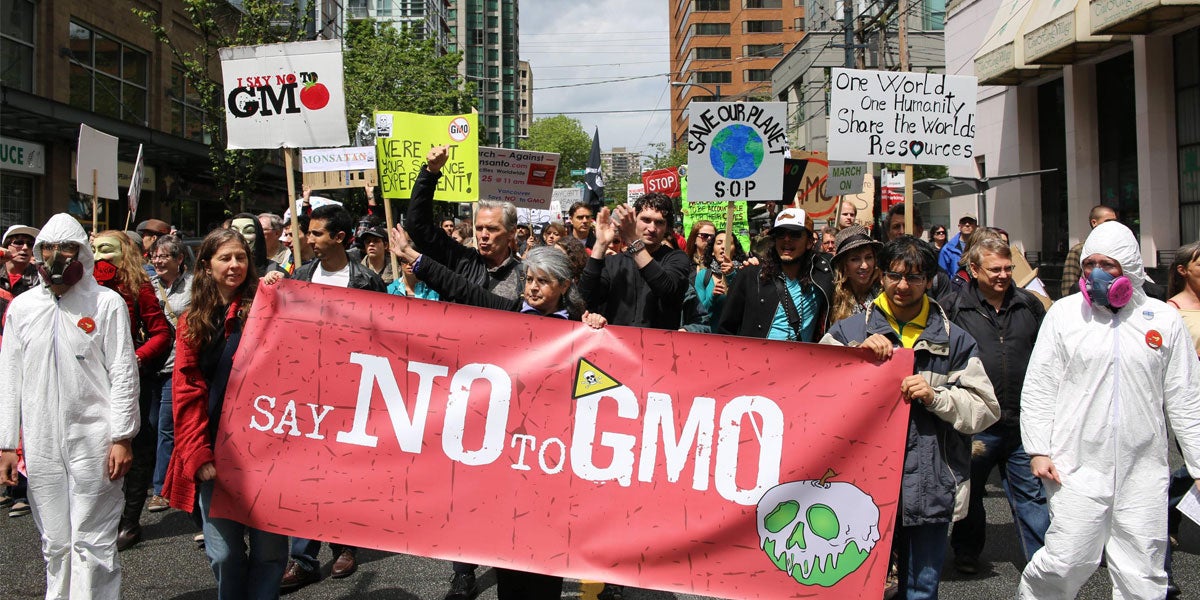 It’s been about a week since Monsanto and Bayer confirmed their intention to say “I do”—ample time for media, lawmakers, consumer and farmer advocacy groups, and of course the happy couple themselves, to weigh in on the pros and cons.

Reactions poured in from all the usual suspects. 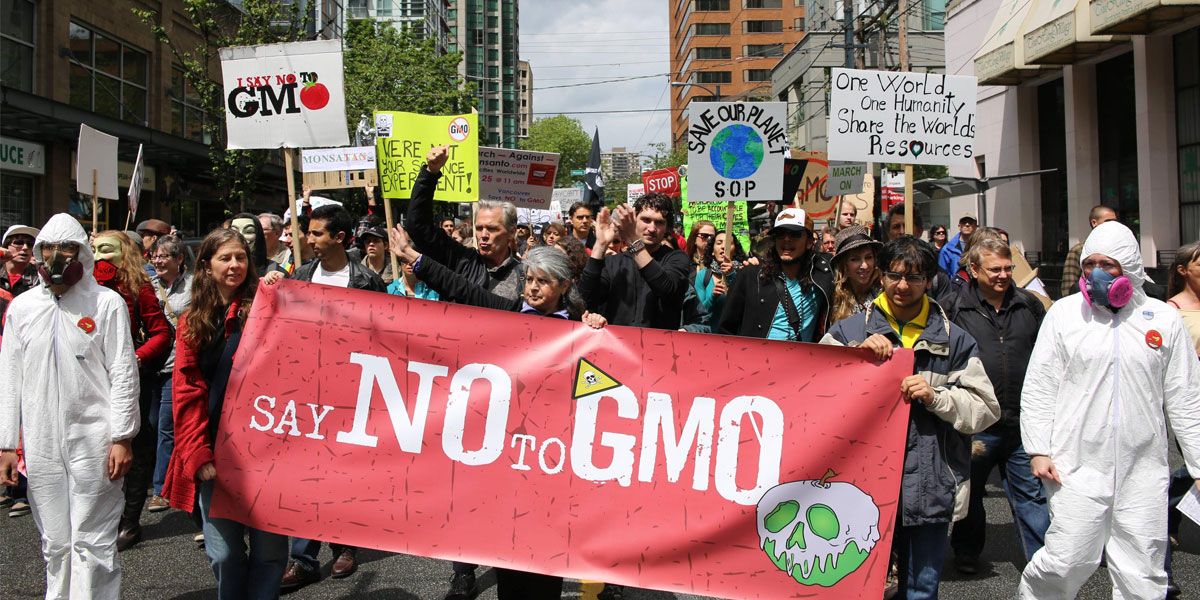 Groups like the Farmers Union, Food & Water Watch, Friends of the Earth and others didn’t mince words when it came to condemning the deal. (Organic Consumers Association tagged it a “Marriage Made in Hell” back in May, pre-announcement, when the two mega-corporations were still doing their mating dance.)

Predictably, the corporate heads of state last week promoted the proposed $66 billion deal as an altruistic plan to improve “the lives of growers and people around the world.” Last week, they told Senate Judiciary Committee members that the merger “is needed to meet a rising food demand.”

Is anyone out there still buying the line that Monsanto and Bayer are in the business of feeding the world? When the evidence says otherwise?

Even if that claim weren’t ludicrous, who thinks it’s a good idea to entrust the job of “feeding the world” to the likes of Bayer, a company that—as part of the I.G. Farben cartel in the 1940s—produced the poison gas for the Nazi concentration camps, and more recently sold HIV-infected drugs to parents of haemophiliacs in foreign countries, causing thousands of children to die of AIDS?

The sordid, unethical, greedy, monopolizing and downright criminal histories of both Monsanto and Bayer have been well documented. Does allowing them to merge into the world’s largest seed and pesticide company pose what two former Justice Department officials call “a five-alarm threat to our food supply and to farmers around the world?”

Just six corporations already dominate worldwide seed and pesticide markets. Additional consolidation will increase prices and further limit choices for farmers, while allowing Monsanto and friends to continue pushing a model of agriculture that has given us superweeds, superbugs and health-harming pesticides. Instead, we need to invest in agroecological, resilient and productive farming.

Without question, this deal, which strengthens the ties between Big Pharma, Big Food and Big Biotech, will hurt farmers and consumers—not to mention an ecosystem already on the brink.

But for those of us committed to ridding the world of toxic pesticides and hideous factory farms, to restoring biodiversity, to cleaning up our waterways, to revitalizing local economies, to helping small farmers thrive, to reclaiming and regenerating the world’s soils so they can do their job—produce nutrient-dense food while drawing down and sequestering carbon—the marriage of Bayer and Monsanto doesn’t change much.

As we wrote when the deal was announced, Monsanto will probably pack up its headquarters and head overseas. The much-maligned Monsanto name will be retired.

Merger or no merger, our job remains the same: to expose the crimes and end the toxic tyranny of a failed agricultural experiment. #MillionsAgainstMonsanto will simply morph into #BillionsAgainstBayer. 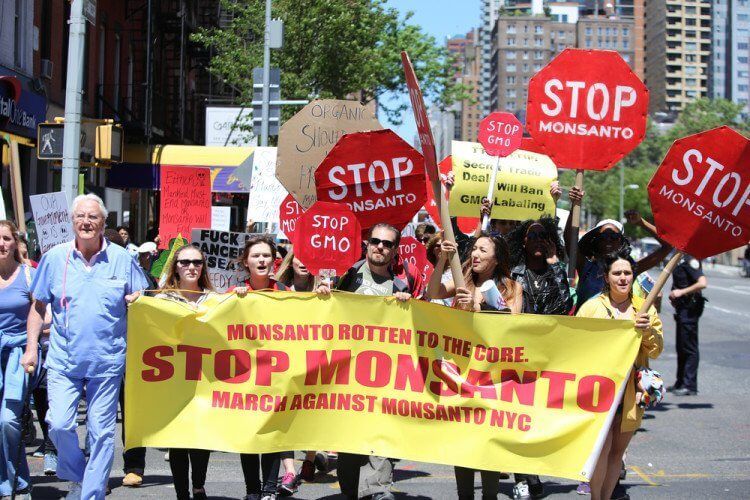 Feed the world? Or feed the lobbyists?

Bayer and Monsanto had plenty of time to perfect their spin on the merger before the big announcement. Yet even some of the most conservative media outlets saw through it.

A Bloomberg headline read: “Heroin, Nazis, and Agent Orange: Inside the $66 Billion Merger of the Year.”

Two friends making dyes from coal-tar started Bayer in 1863, and it developed into a chemical and drug company famous for introducing heroin as a cough remedy in 1896, then aspirin in 1899. The company was a Nazi contractor during World War II and used forced labor. Today, the firm based in Leverkusen, Germany, makes drugs and has a crop science unit, which makes weed and bug killers. Its goal is to dominate the chemical and drug markets for people, plants and animals.

Monsanto, founded in 1901, originally made food additives like saccharin before expanding into industrial chemicals, pharmaceuticals and agriculture products. It’s famous for making some controversial and highly toxic chemicals like polychlorinated biphenyls, now banned and commonly known as PCBs, and the herbicide Agent Orange, which was used by the U.S. military in Vietnam. It commercialized Roundup herbicide in the 1970s and began developing genetically modified corn and soybean seeds in the 1980s. In 2000, a new Monsanto emerged from a series of corporate mergers.

A skeptical Wall Street Journal reporter suggested that the merger, one of three in the works in the agricultural industry, is a sign of trouble. “The dominance of genetically modified crops is under threat,” wrote Jacob Bunge on Sept. 14.

Bunge interviewed Ohio farmer Joe Logan who told him, “The price we are paying for biotech seed now, we’re not able to capture the returns.”

This spring, Mr. Logan loaded up his planter with soybean seeds costing $85 a bag, nearly five times what he paid two decades ago. Next spring, he says, he plans to sow many of his corn and soybean fields with non-biotech seeds to save money.

Nasdaq took the merger announcement as an opportunity to highlight numbers published by OpenSecrets.org showing that Monsanto and Bayer are not only the two largest agrichemical corporations in the world, they’re also two of the biggest spenders when it comes to lobbying.

Together, according to OpenSecrets, Bayer and Monsanto have spent about $120 million on lobbying in the last decade. Monsanto’s spending has been largely focused on the agricultural industry, while Bayer has spent heavily in the pharmaceutical arena.

Both Monsanto and Bayer forked over millions to keep labels off of foods that contain GMOs, according to OpenSecrets.

A big issue for both companies has been labeling of genetically modified foods, which both companies oppose. That put them in support of the Safe and Accurate Food Labeling Act (H.R. 1599), which was signed into law this summer. The law permits corporations to identify products made with genetically modified organisms in ways that critics argue will be hard for consumers to interpret, while superseding state laws that are sometimes tougher, like the one in Vermont.

To be clear, the Safe and Accurate Food Labeling Act was just an intentionally misleading description of a bill intended to protect corporations from having to reveal the GMO ingredients in their products.

A criminal by any other name

Last week, the International Criminal Court (ICC) in The Hague made a big announcement of its own. For the first time in history, the ICC will “prioritize crimes that result in the ‘destruction of the environment,’ ‘exploitation of natural resources’ and the ‘illegal dispossession’ of land,” according to a report in The Guardian.

The announcement came within the same two-week period as three new reports on the sad state of our ecosystem, all of which implicate industrial agriculture:

Whether or not regulators approve the Bayer-Monsanto merger, these companies will continue their rampage against nature. Governments and courts have a lousy track record when it comes to holding these, and other, corporations accountable for the damage they’ve inflicted, over decades, on human health and the environment.

The ICC has signaled that this may change. In the meantime, frustrated with the lack of action and fed up with paying the price for making corporations like Bayer and Monsanto filthy rich, the grassroots are fighting back.

On Oct. 15-16, a panel of distinguished international judges will hear testimony from 30 witnesses and scientific and legal experts from five continents who have been injured by Monsanto’s products. This grassroots-led international citizens’ tribunal and People’s Assembly (Oct. 14-16) will culminate in November with the release of advisory opinions prepared by the judges. The tribunal’s work, which includes making the case for corporations to be prosecuted for ecocide, is made all the more relevant by the ICC’s announcement.

The International Monsanto Tribunal is named for Monsanto, the perfect poster child. But the advisory opinions, which will form the basis for future legal action, will be applicable to all agrichemical companies—including Bayer.

In the meantime, we encourage citizens around the world who cannot participate in the official tribunal and People’s Assembly, to show solidarity by organizing their own World Food Day “March Against Monsanto.”

Monsanto. Bayer. The name doesn’t matter, and though size does matter when it comes to throwing weight around, the crimes perpetrated by the companies remain the same. It’s time to stop them.