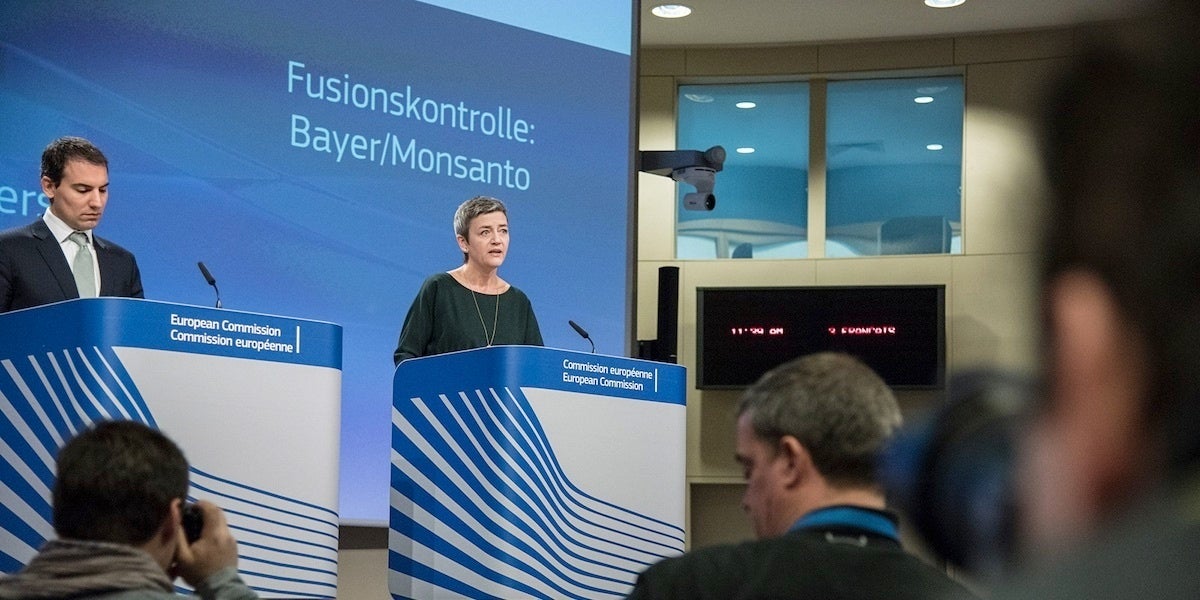 Commissioner Margrethe Vestager, in charge of competition policy, said: 'We have approved Bayer's plans to take over Monsanto because the parties' remedies, worth well over €6 billion, meet our competition concerns in full.' EU Commission Twitter

The European Union approved
Bayer’s takeover of Monsanto, a major hurdle in the $66 billion merger that would create the world’s largest integrated seed and pesticide conglomerate.

The European Commission
said the German chemical-maker’s takeover of the St. Louis-based agribusiness giant is “conditional on an extensive remedy package, which addresses the parties’ overlaps in seeds, pesticides and digital agriculture.”

European Competition Commissioner Margrethe Vestager said in a statement: “We have approved Bayer’s plans to take over Monsanto because the parties’ remedies, worth well over €6 billion, meet our competition concerns in full. Our decision ensures that there will be effective competition and innovation in seeds, pesticides and digital agriculture markets also after this merger.”

Consolidation of Bayer and Monsanto—not to mention the deals between DuPont and Dow Chemical Co, and ChemChina and Syngenta—will completely reshape the global seed and pesticide markets. Farmers and concerned citizens
have raised worries that the merged corporations will control data about farm practices, increase prices and diminish quality, choice and seed varieties.

“Wednesday’s merger decision is arguably Vestager’s most controversial one to date. Environmentalists, including Hollywood actor
Mark Ruffalo, have bombarded her with tweets, emails, letters and postcards begging her to block a ‘merger from hell’ that might harm human health, farming and the environment. Vestager said many of these concerns went beyond competition policy and the Bayer/Monsanto merger.”

Vestager noted in her statement, “In particular, we have made sure that the number of global players actively competing in these markets stays the same. That is important because we need competition to ensure farmers have a choice of different seed varieties and pesticides at affordable prices. And we need competition to push companies to innovate in digital agriculture and to continue to develop new products that meet the high regulatory standards in Europe, to the benefit of all Europeans and the environment.”

According to
Friends of the Earth Europe, Bayer-Monsanto merger was opposed by more than a million people and opinion polls indicated that 54 percent of EU citizens thought it was “very” or “fairly important” that the European Commission blocked it.

“This merger will create the world’s biggest and most powerful agribusiness corporation, which will try to force its
genetically modified seeds and toxic pesticides into our food and countryside,” Adrian Bebb, food and farming campaigner at Friends of the Earth Europe, said in a statement.

“The Commission decision also allows them, together with BASF, to become data giants in agriculture—the ‘Facebooks of farming’—with all the pitfalls that entails. The coming together of these two is a marriage made in hell—bad for farmers, bad for consumers and bad for our countryside.”

The EU just approved the #Monsanto-Bayer merger. This marriage made in hell will dominate our food supply. The @EU_Commission ignored over 1 million of us who called on them to block this deal. Now the fight moves to the US where this can still be stopped! https://t.co/lt0gBY0Wdh

Bayer intends to complete the deal by the end of the second quarter but still needs approval in other major markets, including the U.S. and Russia.

U.S. Department of Justice officials are
reportedly worried that the merger could hurt competition.

However, Bayer Chief Executive Officer Werner Baumann said in a statement that “receipt of the European Commission’s approval is a major success and a significant milestone.”