Bayer 'Confident' It Can Still Strike Deal with Monsanto, Merger Could Spell Disaster for Farmers and Global Food Supply 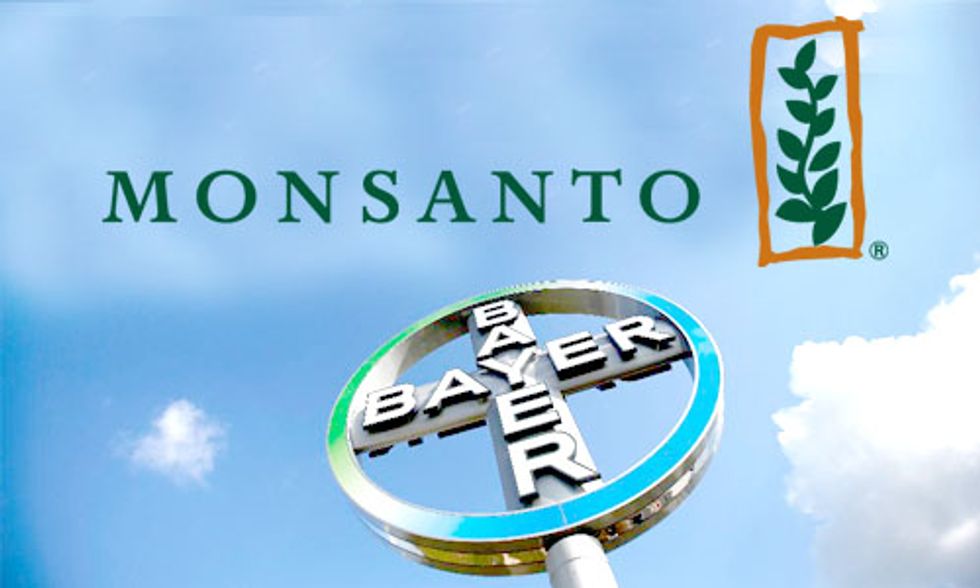 The historic, all-cash deal would have formed the largest seed and pesticide company in the world, but Monsanto's board unanimously spurned Bayer's unsolicited bid for being incomplete and financially inadequate.

“We believe in the substantial benefits an integrated strategy could provide to growers and broader society, and we have long respected Bayer’s business,” Hugh Grant, Monsanto chairman and CEO, said in a statement. “However, the current proposal significantly undervalues our company and also does not adequately address or provide reassurance for some of the potential financing and regulatory execution risks related to the acquisition.”

Despite the snub, Bayer is looking forward to further talks with Monsanto, Bloomberg reported.

“We are pleased that Monsanto’s board shares our belief in the substantial benefits an integrated strategy could provide to growers and broader society,” Bayer CEO Werner Baumann said in a statement. “We are confident that we can address any potential financing or regulatory matters related to the transaction. Bayer remains committed to working together to complete this mutually compelling transaction.”

The St. Louis-based company also added that it is "open to continued and constructive conversations" with the aspirin maker on whether a transaction in the best interest of Monsanto shareowners can be achieved.

This means that the already eye-popping $62 billion sum could blossom even higher since both parties are open to further negotiations. As Bloomberg noted, "the conciliatory tone from both sides sets the stage for an improved offer from Bayer," and further pointed out:

While Monsanto has consistently traded at less than the $122-a-share offer price since the companies started discussing a deal, the stock rallied Tuesday, gaining 2.7 percent to $122.21 at 9:38 a.m. in New York.

Bayer’s comments were "very positive,” Brett Wong, an analyst at Piper Jaffray Cos. in Minneapolis, said in an interview. Bayer can afford to pay as much as $140 a share and still add to double-digit growth in earnings in the mid-term, Jeffrey Holford, an analyst at Jefferies LLC, said in a note.

But Bayer reiterated in its press release that its $122 per share all-cash proposal "provides full and certain value for Monsanto shareholders."

Monsanto, the world's largest producer of genetically modified (GMO) crops and maker of the herbicide Roundup, has faced mounting controversy in recent years, from global disputes to numerous lawsuits over its cancer-linked flagship product. Sales have been slumping and thousands of jobs have been cut.

MarketWatch reported that the Monsanto’s poor image did factor into consideration of the deal, Baumann acknowledged in a media call on Monday.

A Sum Of Us petition signed by more than 21,000 people has already been launched to stop the potential "merger from hell" since the news surfaced last week. The NGO's petition states:

Almost everything you eat could be controlled by a single mega-corporation, if Bayer gets its way and buys Monsanto.

Once the deal goes ahead it could spell disaster for our food supply and farmers, ushering in a new era of sterile crops soaked in dangerous pesticides. If the deal is successful, it'll make the new corporation the biggest seed maker and pesticide company in the world—and it will have almost total control of the most important aspects of our food supply.

The pharmaceutical giant itself has been subject to criticism over its widely used insecticide, imidacloprid, which belongs to a controversial class of chemicals called neonicotinoids, and is linked to deaths of bees.

"At the center of Bayer and Monsanto's corporate agribusiness model is the indiscriminate, widespread use of pesticides linked to the massive global bee die-off," the petition reads. "Monsanto rejected the first offer from Bayer, but the negotiations are far from over. Once a merger like this goes through, Bayer and Monsanto will be even harder to stop—we need to act now to block the creation of this massive corporate bee-killer."

“The consolidation and driving out of smaller competitors, and controlling the marketplace and raising prices of seeds and pesticides for farmers worldwide is going to be a real shock to the food system,” Robert Lawrence, a Johns Hopkins School of Medicine professor and the founding director of the Center for a Livable Future, told MarketWatch.

“I don’t know if that will in the end give farmers more choice in the seeds and traits in those seeds or less choice," Greg Jaffe, biotechnology project director at the Center for Science in the Public Interest, told the publication. “It might allow Bayer to put more of Monsanto’s seeds in their variety … or they might choose to produce less varieties.”

Bayer, which is also involved in the GMO-seed market, responded in a statement that it has a role in feeding the growing global population.

“GMO is all about science—and it is a relevant tool in the toolbox to fight hunger in the world,” the company said.

CBS's MoneyWatch noted that antitrust issues could kill a potential merger. "Given the market power of the businesses, the transaction will face significant regulatory scrutiny. How that will play out is hard to predict, but one fact that could help the deal is that Bayer and Monsanto don't overlap much either geographically or in its agrochemical businesses," the report stated.

Patty Lovera, the assistant director of the nonprofit Food & Water Watch, told MarketWatch that the Justice Department should examine the deal.

“Anytime companies, already giant companies, merge, they get more market share. There’s political power that comes with that economic power,” she added. “The players already in that room are going to get bigger.”

Organic Consumers Association's Ronnie Cummins and Martha Rosenberg shared this perspective in a blog post: "While a Bayer-Monsanto deal (like a DuPont-Dow deal or ChemChina-Syngenta deal) certainly threatens the world food supply with domination by GMOs and destructive agrochemicals, there may be an underreported bright side: Industries that are doing well generally spin off; industries that are performing poorly generally merge and consolidate."