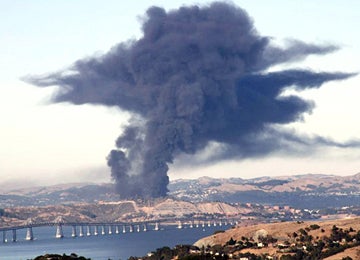 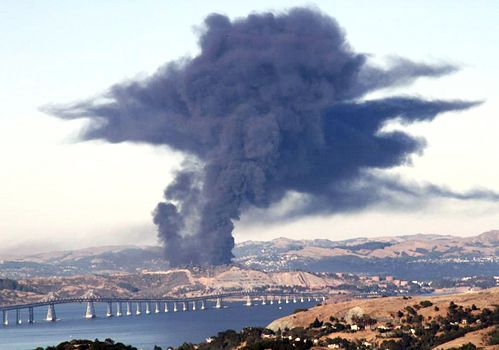 Smoke from the Chevron refinery explosion spreads across the bay. Photo by Drew Dellinger, a bay area resident.

The largest greenhouse gas polluter in the state, Chevron, along with the other four Bay Area refineries, is already refining tar sands oil from Canada, brought into the area by rail.

Chevron is among industry giants pressing for presidential approval of the controversial Keystone XL pipeline project that would exponentially increase the flow of “dirty” tar sands oil into refineries, locally and throughout the nation.

The protest announcement came a day after President Obama’s precedent-setting speech reframing the national debate on climate change, including measures he intends to take despite strong opposition from oil and coal industrial giants and their congressional “deniers” and apologists.

This summer’s protest will take place three days ahead of the anniversary of the Richmond Chevron refinery explosion and fire last August that sent 15,000 workers and local residents to area hospitals.

In response to persistently lax company health and safety practices that led to last year’s fire and Chevron’s stubborn disregard for the environment, 350BayArea.org and the Bay Area climate movement brought together 5,000 people on Feb. 17, in the biggest climate protest in Northern California history—second only to the Washington, DC, rally that drew 40,000 people.

Meanwhile, thanks to the persistent work of the Richmond Progressive Alliance (RPA), labor, environmental groups, progressive Richmond Mayor Gayle McLaughlin, several progressive City Council members and others, Chevron has made modest concessions including upping its contributions to non-profits and West County Education and taking steps to make it possible for Richmond residents to get more of the relatively good paying jobs at the refinery.

Mayor McLaughlin and the grassroots campaign led by RPA won the election in 2010 despite Chevron and casinos contributing heavily to the opposition’s coffers.

Mayor McLaughlin, RPA and other progressives have put together a comprehensive set of demands requiring Chevron to improve safety and health procedures as well as strengthening the unions’ and community’s say on Chevron conduct in the plant and towards the community.

The public plan would require Chevron to increase investment in emissions monitoring and control equipment, advanced refining processes and solar energy with a goal of bringing down total emissions by 40 percent by the end of the decade.

Meanwhile, earlier this year a coalition of labor, community and environmental groups came together in Richmond under the banner of the Collaborative on Refinery Safety and Community Health.

The collaborative has drawn the attention of the Chemical Safety Board, Cal/OSHA and Governor Jerry Brown, who put together a state-level refinery safety task force last year following the August fire. The task force met with collaborative representatives several times to discuss “regulatory and statutory changes” regarding government oversight of the refinery industry.

“But its scope is regional,” Karras added. “We’re talking about all of the Bay Area refineries directly—and indirectly, about all refineries in the country.”

The union and local community initiatives could well serve as an example adaptable to the particular conditions and needs of local communities in other parts of the country.

This could enhance grassroots support for national environmental initiatives like those of the President and other government officials and entities, and for the labor-community-environmental alliances vital to meaningful advances.

Of energy industry-inspired claims that environmental concerns cost jobs, CBE organizer Andres Soto said, “That’s not the case. Part of the point of this collaborative is to destroy that myth.”

Charlotte Brody, national associate director of the BlueGreen Alliance, explained that stricter safety and maintenance regulations for European refineries are far more effective in terms of accidents and fires.

In some cases, the European refineries are owned by the same companies that operate unsafely in the U.S., Brody said. “And they’re not taking huge losses for doing that.”

“This is a known universe,” Brody added. “We know how to make refineries safer.”

Movements with a local focus like in Richmond—when added to others elsewhere in the country along with national and state level efforts—could potentially contribute to defeating Republican climate change deniers and energy company apologists in swing races in the 2014 and 2016 elections.

They could also potentially influence Democratic office holders beholden to energy companies in regions dominated by energy industry giants and, in some cases, possibly even lead to their replacement by more environmentally friendly and people-friendly Democrats.