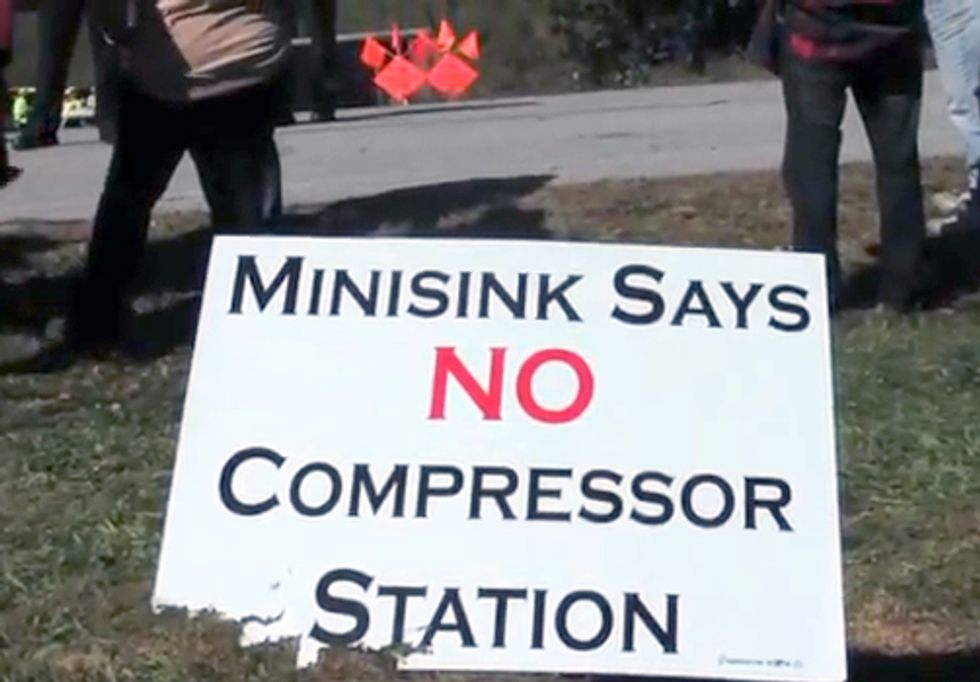 An impacted landowner from Minisink, NY has taken the NY State Department of Environmental Conservation (DEC) to the State Supreme Court over the highly contested Minisink Compressor Station currently under construction by Millennium Pipeline, a subsidiary of NiSource Inc.

Community organizer, landowner and petitioner in the case, Pramilla Malick has alleged that DEC violated both state and federal law when it issued two permits for the project that will be located in the middle of a residential community with 200 homes within a half mile. Malick alleges that there will be health and safety risks imposed on the community from the project. Both DEC and Millennium Pipeline have filed motions to dismiss and the judge is expected to issue a decision any day.

M.U.S.T.—Mothers United for Sustainable Technologies—co-founder, Tanyette Colon has been following the 16-month Minisink compressor station battle and has produced two videos to highlight the struggle of community members in Minisink, NY. In Episode I: Throwing Stones at Goliath, it shows how Minisink is the projected hub for larger gas infrastructure. In Episode II (see below), it shows the struggle of this community as they fight this Goliath project that when built will be a potential health threat to the community.

“The DEC has become a rubber stamping agency and there is no one protecting New Yorkers," said Malick, who was forced to file the case pro-se because of the large expense in filing suit. “It is an unfair burden on a resident and a community.”

The New York State Attorney General’s office which also at times represents New York residents and communities against wrong doing is in this case obligated by law to defend the DEC.

A technical report released last Friday, is expected to be a major wrench in Millennium Pipeline’s plans to expand its natural gas infrastructure in New York’s Southern Tier. Richard Kuprewicz, a prominent engineer for national pipeline issues, and president of Accufacts, Inc., indicates that Millennium’s intention to postpone the upgrade to the 7-mile stretch known as the Neversink Segment would threaten the safety of residents all along the pipeline segment.

This report throws into critical doubt the viability of Millennium’s highly contentious $43 million compressor station project in Minisink, NY. Minisink residents, represented by the D.C.-based attorney Carolyn Elefant, have accordingly filed a motion for a reopening of the docket, as well as a stay of construction in light of the new data bearing directly on the case.

According to Kuprewicz, “The velocities on the 24-inch Neversink segment clearly exceed prudent design standards and safety margins establishing much lower actual gas velocities on pipelines that are intended to avoid gas transmission pipeline rupture. Such high actual gas velocities for a natural gas transmission pipeline raise serious questions as to the adequacy or completeness of any previous hydraulic studies or decisions that may have been used to justify approval of the Minisink Compressor Project. The Minisink Compressor Project is a very poor proposal and should be rejected.”

The controversial project has been strongly opposed by the Minisink community in a battle that has already lasted nearly a year and a half. The Federal Energy Regulatory Commission (FERC) approved the project by an unprecedented slim margin—a 3 to 2 vote by commissioners. A rehearing is currently being considered by FERC, and if it’s denied Minisink can move on to federal court however residents are prevented from doing so by a FERC-issued tolling order. In the meantime, Millennium is fully underway with the project, despite intense local opposition and lack of a final legal determination. However, Kuprewicz’s report now directly confirms many of the communities’ concerns as solidly based in technical fact.

Minisink residents, as well as those in neighboring towns along the Neversink stretch of Millenniunm Pipeline, are concerned about the possibility of a major pipeline disaster occurring similar to the deadly explosion in San Bruno, California in 2010. As is currently the case in Minisink, residents in San Bruno were concerned about the safety of the gas line for years, and experts warned about the serious risks involved in stress to an aging pipeline system. Eight people died in the gas fires, and dozens of homes and structures were destroyed. Kuprewicz was involved in that case as well, pleading for those responsible to prevent such grave risks to a host community.

Minisink residents continue to be active in the campaign for a safer alternative plan—the community backed Wagoner Alternative. Only one more of the five commissioners need be swayed to overturn this historic decision.

Visit EcoWatch’s FRACKING and PIPELINES pages for more related news on this topic.