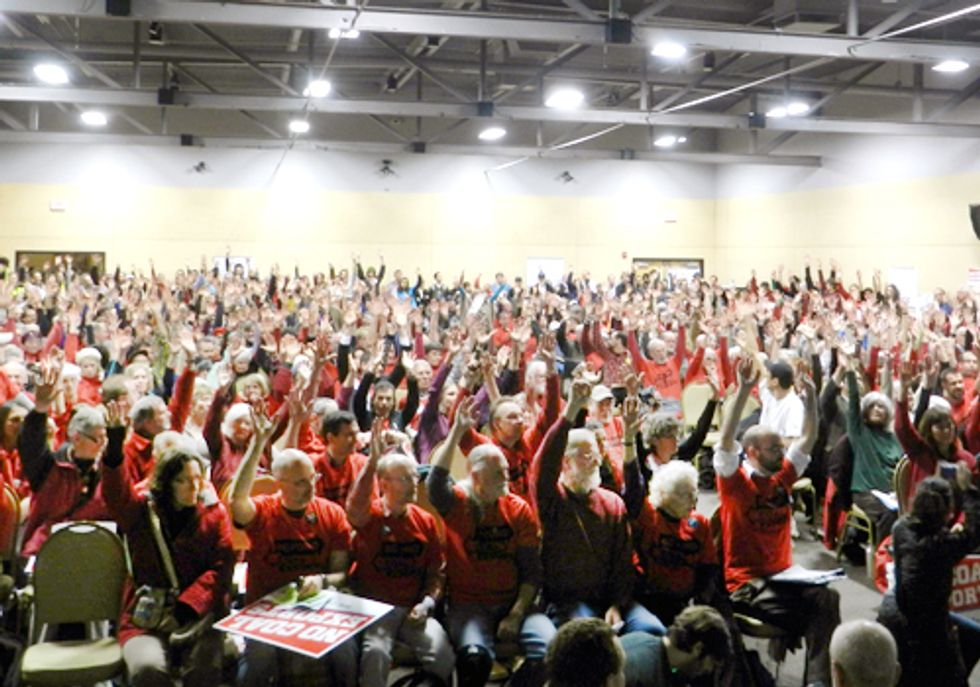 People in Washington and Oregon have been turning out in force to protest the coal industry’s plans to send millions of tons of dirty fuel through their backyards, and an incident yesterday just added to the laundry list of reasons coal is a bad bet. From the Vancouver Sun:

A large ship docking at Westshore Terminals at Delta’s Roberts Bank crashed into a berth early Friday morning. In a statement, the company said a large cape size vessel was docking at Berth 2 at 1 a.m. when it collided with a trestle leading to Berth 1, removing a large portion of the trestle.

Westshore Terminals, just across the border in Vancouver, is the biggest coal port on the West coast. You can see a photo here where the tanker sheared right through a long conveyor belt that stretches from the dock to the shore. The coal spilling into the water is visible even from several hundred feet above … drifting down-current toward who knows where. The toxins in the coal will pollute the water and harm wildlife, not to mention causing a massive headache for the port authorities.

Tanker accidents are another heavy risk of exporting coal, alongside train wrecks, pollution, wildlife impacts and dozens of other problems. And if the coal industry gets its way, we’re talking about a lot of tanker traffic in a pretty small space—it takes more than a couple of boats to transport 150 million tons of coal each year, and that means more accidents, more collisions, and more coal spills.

Oregon’s Governor John Kitzhaber has been one of the key figures trying to get the whole story before state and federal agencies make any decisions about these coal terminals, and he recently spoke of the need to consider the issue from a broader perspective:

I would argue [the federal government is] really underpricing coal, which means we are subsidizing the development of coal-fired plants in Asia. The way the wind blows, all that mercury is going to blow back this way.

He’s right, of course, and it’s great to see that someone in authority is taking these problems seriously. But the industry and too many people in the federal government continue to plug up their ears and say, “It’s no big deal! We know what we’re doing so y’all can just go home and relax.”

That’s not going to cut it. If the industry knew what they were doing, we wouldn’t have accidents like the one in Vancouver, or traffic jams caused by malfunctioning coal trains or deadly derailments. Orcas and other marine life in Puget Sound are at particular risk.