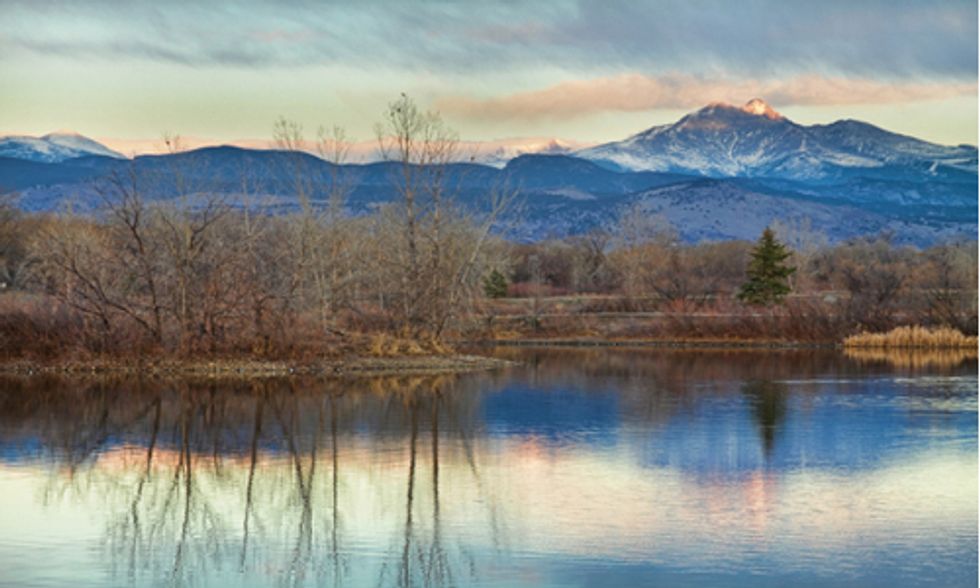 The battle between citizens concerned about health, safety and the environment and corporate fossil fuel interests continues to escalate in Colorado. Increasingly the battle is also about how much control citizens can exercise through the democratic process over what goes on in their own communities.

Longmont, Colorado citizens are concerned about their health, safety, and the despoilment of their environment, exemplified by scenes like this one of Long's Peak.
Photo credit: Shutterstock

In the latest skirmish in what's looking like a long war, a group of organizations filed an appeal today to uphold a fracking ban passed by voters in Longmont, Colorado in 2012. It's one of several such ballots measures passed in the state, including in Boulder, Lafayette and Fort Collins, despite millions spent by the fossil fuel industry to defeat them.

District court judge D.D. Mallard struck down Longmont's ballot measure in July in a challenge brought by the Colorado Oil and Gas Association, finding that the state's ability to develop its oil and gas resources trumped citizen concerns. She wrote, “While the court appreciates the Longmont citizens’ sincerely held beliefs about risks to their health and safety, the court does not find this is sufficient to completely devalue the state’s interest.”

"The people voted to keep fracking away from their homes, schools and parks, and their will should be honored," said Eric Huber, Sierra Club senior managing attorney. "We believe the judge made a mistake in elevating the oil and gas industry over local interests, and trust the court of appeals will see things differently."

In addition to the Sierra Club, Earthworks, University of Denver Law Clinic, Our Longmont and Food & Water Watch are part of the coalition fighting to uphold the voters' decision.

"When a community chooses not to host fracking, they shouldn't be sued," said Earthworks' energy program director Bruce Baizel. "That's what this appeal is about, it's what the ballot initiatives were about, and it's what the governor's blue-ribbon commission must remember. It's common sense."

The fracking ban remains in place during the appeals process, but the governor's blue ribbon commission has opened up another front in the war.

The commission was the result of an agreement between Governor John Hickenlooper and Congressman Jared Polis (CO-2), both Democrats. Polis was spearheading a drive to place two anti-fracking measures on the state ballot, but withdrew them when the governor agreed to establish the commission.

This week Hickenlooper announced the 19 panel members, chosen from more than 300 applicants. Although there are voices on the panel for stronger fracking regulations, many anti-fracking advocates remained unimpressed.

"None of the people appointed to this commission were involved in the local elections in 2013 in which four cities voted to ban or postpone fracking," said Fort Collins environmental activist Gary Wockner. "This committee simply does not represent the diversity of Colorado or the people who pushed the issue forward in the first place."

Nonprofit citizen journalism outlet Watchdog Wire Colorado suggested the commission might give the impression of being biased.

Earthworks' Baizel questioned the entire underlying mandate of the commission—“to ensure that Colorado’s economy and environment remain healthy and robust," saying that it was missing two critical pieces that should be considered: the local democratic process and the climate.

"Given the limited mandate and commission make-up, it is difficult to see how this last, best attempt at reform of the ‘oil and gas trumps everything’ regulatory framework will change the larger political push that brought it into being," he said. "Ultimately the true measure of this commission will be simple. If it offers ways that local communities can decide for themselves if they want to live with oil and gas development, it will be a success. Anything short of that will just be howling at the moon."