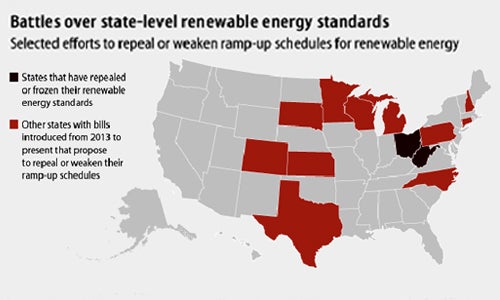 There was a series of attempts in 2013 and 2014 to repeal or weaken state laws that set targets for increasing the use of renewable energy. States across the country—including Wisconsin, Kansas, Texas and North Carolina, among others—faced campaigns against their renewable energy standards. All of those attempts were unsuccessful except in the case of Ohio. 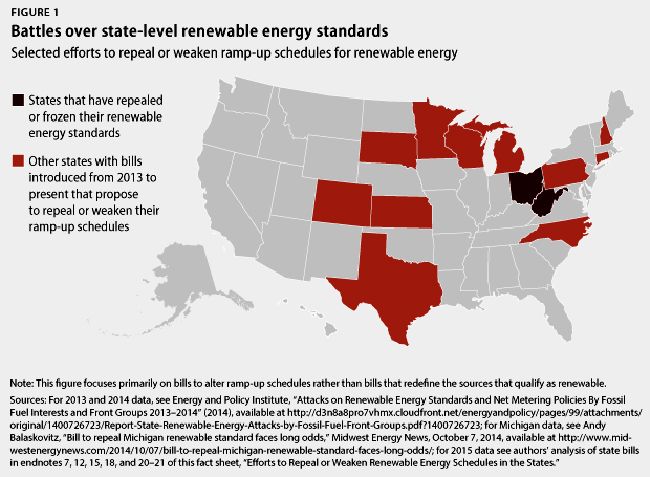 Passed in 2008 with nearly unanimous support from both Republican and Democratic legislators, Ohio’s energy standards required utilities to meet 12.5 percent of electricity demand with renewable energy and to decrease energy use by more than 22 percent by 2025, with interim targets each year beforehand. The standards also required half of the renewable energy to come from in-state facilities.

Despite clear evidence that the standards had economic benefits, including increased in-state investment, employment and savings for ratepayers, S.B. 310 proposed to freeze the standards for two years and eliminate the in-state requirement for renewable energy. After the bill passed the state legislature in May 2014 and Gov. John Kasich (R) signed the bill into law the following month, Ohio became the first state to take regressive measures against its renewable energy standards. The future of the standards after the two-year period is uncertain.

Reports are now coming in from leaders in Ohio’s solar, wind and energy efficiency industries that employment and investment are draining from the state, as described in the Center for American Progress issue brief, The Economic Fallout of the Freeze on Ohio’s Clean Energy Sector.

There have already been several new attempts in 2015 to repeal or weaken state-level energy standards, and further attempts—backed by aggressive lobbying campaigns—are certainly forthcoming. For those states, Ohio serves as a cautionary tale of the in-state economic damage that could follow a rollback.

S.B. 44 proposed to roll back the requirements for investor-owned utilities to 15 percent by 2015 and for cooperative electric associations to 15 percent by 2020. The bill passed the Republican-controlled state senate by a margin of 18 to17, split along party lines. On March 3, the House committee on State, Veterans, and Military Affairs decided on a 6–5 vote along party lines to postpone the bill indefinitely.

While the bill was being debated, State Sen. Matt Jones (D) argued that the standards have reduced electricity rates for consumers and bolstered the state’s clean energy economy, which accounts for more than 22,000 jobs. Public opinion has supported the standards as well: Coloradans are 76 percent more likely to support a candidate who promotes renewable energy, according to the 2014 Colorado College State of the Rockies poll.

H.B. 6026 was introduced in January, which  proposes to suspend the state’s renewable energy standards for five years. It has been referred to the Committee on Energy and Technology.

Kansas currently requires that utilities meet 10 percent of their gross generation capacity through renewable sources through the end of 2015, after which they would be required to meet 15 percent through 2019 and 20 percent by 2020.

The state has already faced multiple efforts to weaken or eliminate its energy standards over the past three years, which have been supported by Koch Industries and affiliated groups, as well as utility interests.

This February, H.B. 2373 was introduced, which would eliminate the state’s renewable energy standards at the end of 2015. It has been referred to the Committee on Energy and Environment.

H.B. 543 proposed to repeal the state’s renewable energy standards.[xvii] The bill was defeated in the New Hampshire House on March 4.

South Dakota currently has a voluntary goal that 10 percent of retail electricity should come from renewable, recycled, or conserved energy by 2015.

H.B. 1202 was introduced in February, which would roll back the goal to 10 percent by 2020. It has been referred to the Committee on Commerce and Energy.

State law previously required that large-scale utilities meet a standard of 25 percent renewable or alternative energy by 2025, with interim targets of 10 percent by 2015 and 15 percent by 2020. The standards were not ambitious, however, as they allowed fossil sources such as natural gas, coal with the use of advanced coal technologies, and coal bed methane to qualify as alternative sources.