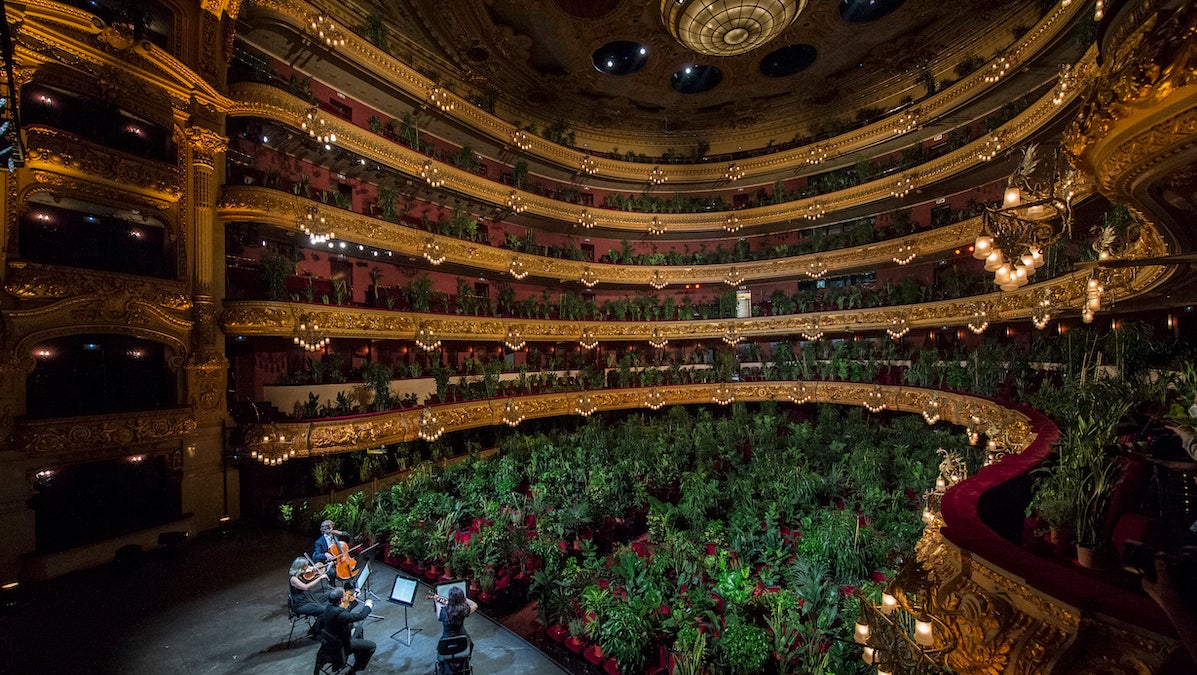 A Barcelona opera house played its first concert since mid-March to an unusual audience: 2,292 plants.

The “Concert for the Biocene” at the Liceu opera house came the day after Spain finally lifted an emergency order put in place to prevent the spread of the new coronavirus, Reuters reported. A string quartet played Giacomo Puccini’s “Chrysanthemum,” bowing respectfully before and after to its leafy audience.

“Nature advanced to occupy the spaces we snatched from it,” Eugenio Ampudio, the conceptual artist behind the unique concert, said during a rehearsal Sunday, according to Reuters. “Can we extend our empathy? Let’s begin with art and music, in a great theatre, by inviting nature in.”

Human listeners were invited in too via a livestream.

The concert organizers are also sharing the event in another way.

“After the concert, the plants will be donated with a certificate from the artist to 2,292 people who have been on the healthcare frontlines, the toughest front in a battle unprecedented for our generations, in recognition of their work,” a Liceu press release explained.

The plants came from local nurseries and will be given to workers at the Hospital Clínic of Barcelona in particular.

Spain has been one of the countries hardest hit by the coronavirus, with 28,323 deaths and 246,272 cases to date, according to Reuters. As it emerges from lockdown, theaters and cinemas are being allowed to reopen with limits on audience size, NPR reported.

Monday’s unique concert was conceived as a prelude to the opera’s 2020-2021 season.

“The Liceu, one of the largest and most important opera halls in the world, thus welcomes and leads a highly symbolic act that defends the value of art, music and nature as a letter of introduction to our return to activity,” the opera house wrote.

The concert also embodies Liceu artistic director Víctor García de Gomar’s goal of forging dialogue between the venue and the visual arts. It is a collaboration between the Liceu, Ampudia, the Max Estrella Gallery and the curator Blanca de La Torre. As part of the collaboration, Ampudia took pictures and a video during the performance that will be added to the Contemporary Art Collection of “la Caixa.”

“After a strange, painful period, the creator, the Liceu’s artistic director and the curator Blanca de la Torre offer us a different perspective for our return to activity, a perspective that brings us closer to something as essential as our relationship with nature,” the press release said.