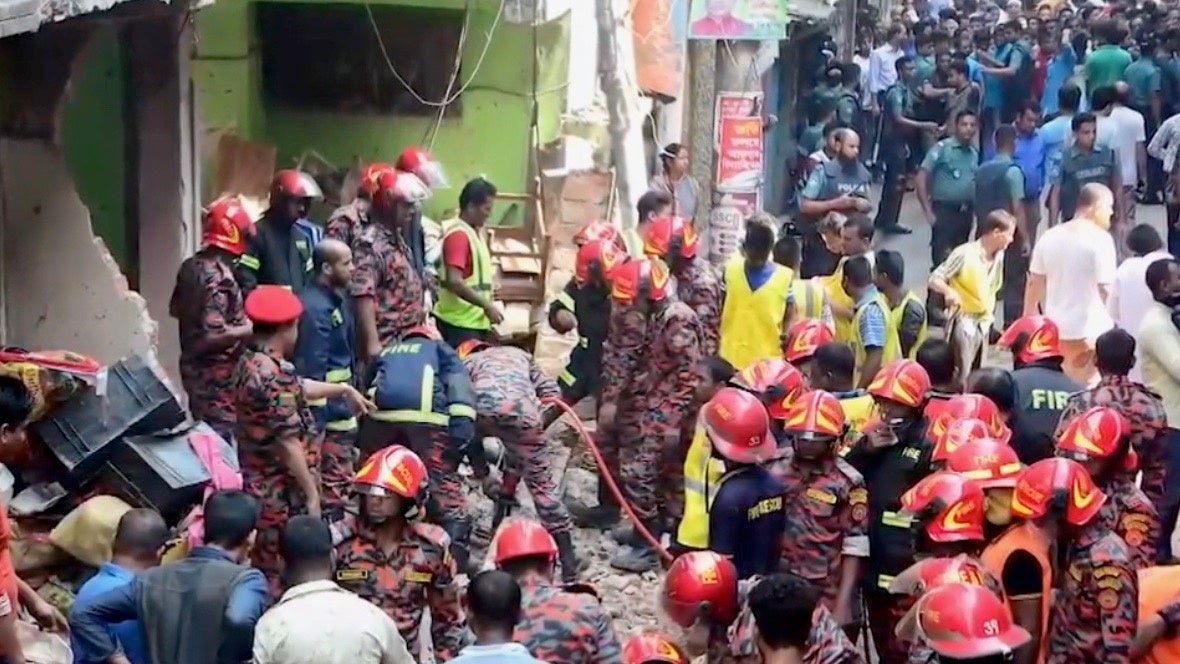 At least seven people have died in a Bangladesh pipeline explosion. Youtube screenshot

At least seven people were killed when a gas pipeline exploded in Bangladesh Sunday, and another 25 were injured, the Associated Press reported.

The blast collapsed portions of the boundary wall of a building in the city of Chittagong while residents were getting ready for work in the morning, according to local police chief Mohammed Mohsin.

“So far we have confirmed about seven dead bodies, including one child, four males, and two females who were severely burned on the spot,” Bijoy Boshak, deputy commissioner of the Chottogram Metropolitan Police (North), told Anadolu Agency.

The seven who died were all members of one family, Indus News reported.

Boshak told Anadolu Agency that the seven who died were rushed to the hospital, where they were pronounced dead on arrival.

Among the injured, one suffered burns, and the rest were wounded when the walls collapsed, according to reports from local channel Shomoy TV shared by Anadolu Agency. Boshak said the death toll could rise, since some of the people admitted to the hospital were in critical condition.

The gate of a nearby building and a minibus in its garage were also damaged by the blast.

Fire service official Amir Hossain told Reuters that the cause of the explosion was not yet known, but was being investigated.

“We primarily came to know that due to the gas pipeline blast, a part of a building collapsed,” Boshak told Anadolu Agency.

The explosion comes one month after seven children died when a gas cylinder used for inflating balloons exploded in the Bangladeshi capital of Dhaka, Reuters noted.

The news agency further pointed out that poorly monitored gas pipelines and cylinders are a frequent cause of accidents in Bangladesh.

Pipeline explosions aren’t the only danger that fossil fuels pose to the low-lying country, however.

Bangladesh faced the third-most risk from hazards related to the climate crisis of any country in the world, according to the 2019 Global Peace Index.

“Bangladesh has been one of the most vulnerable countries to the impacts of climate change although the country has no significant role for it,” the country’s Prime Minister Sheikh Hasina said in a keynote address at the “Dhaka Global Dialogue-2019” this month. “As a result, floods, cyclones, droughts and other natural disasters can threaten people’s lives and livelihoods.”

#Bangladesh has been one of the most vulnerable countries to the impacts of climate change although the country has no significant role for it, says #Bangladesh PM Sheikh Hasina (@GlobalDhaka): https://t.co/yS4tksm8aY

Indeed, while the country only contributes about 0.3 percent to global greenhouse gas emissions, it could lose 20 percent of its land mass with only three feet of sea level rise, which would displace more than 30 million people. A UN report warned in September that global sea levels could rise three feet by 2100 if action is not taken to fight global warming.