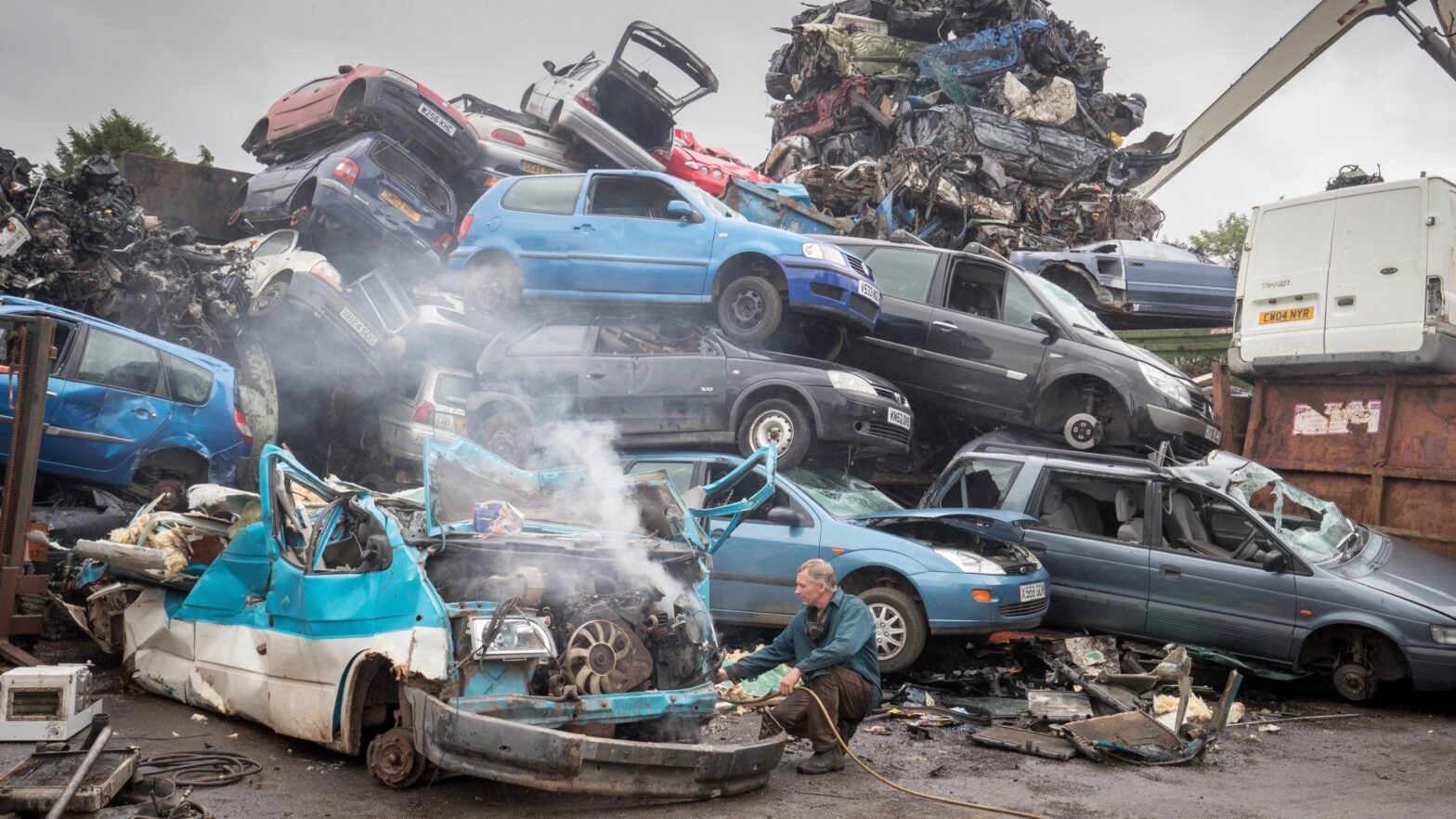 Yard owner Ped Rossiter removes spare parts from a old, end-of-life Ford Transit as it is processed at Pylle Motor Spares and Metal Processing, a licensed scrap yard near Somerset in the UK in 2017 when the UK government had announced its ban on the sale of petrol and diesel powered cars and vans from 2040. The move followed similar pledges in France and has seen a number of car manufacturers offering substantial savings or 'scrappage' deals on new cars if customers trade-in older more polluting cars. Matt Cardy / Getty Images

Britain announced that it will ban sales of new diesel and gasoline powered cars in 15 years last week. That was five years earlier than expected, but necessary for the UK to reach its goal of net-zero emissions by 2050, according to a statement from the prime minister’s office, as CNN reported.

The UK’s Transportation Secretary Grant Shapps, revised that number this week, when he told BBC Radio 5 Live it could happen by 2032, adding there would be consultation, as the BBC reported.

The 2032 target puts the UK in line with Scotland, which, three years ago, pledged to ban sales of new combustion engine cars by 2032. However, Scotland does not have the authority to ban new cars, so it plans to phase out the need for combustion engines, by reducing the number of gas stations and adding many more charging stations, as the BBC reported.

Glasgow, in Scotland, will host COP26 later this year, and the UK government is laying out its environmental proposals in the build-up the November UN conference, as the BBC reported.

The proposed ban also includes hybrid cars, so the only sales that will be allowed are fully electric or hydrogen cars and vans, according to the BBC.

Predictably, representatives from the automotive industry have balked against the timeline, raising concerns about whether the government would continue to subsidize sales of electric vehicles, a dearth of charging infrastructure, and potential job losses, as CNN reported.

“It’s extremely concerning that government has seemingly moved the goalposts for consumers and industry on such a critical issue,” Mike Hawes, the chief executive of the Society of Motor Manufacturers and Traders, said in a statement, as CNN reported. “With current demand for this still expensive technology still just a fraction of sales, it’s clear that accelerating an already very challenging ambition will take more than industry investment.”

The Society of Motor Manufacturers and Traders’s numbers show that while electric car sales rose 144 percent last year in the UK, they make up less than two percent of the total number of cars on the road, as the Express reported. In 2019, nearly 1.5 million new combustion engines cars were sold in Britain. Only 37,000 electric cars were sold.

Since charging infrastructure is not in place yet, many car buyers have anxiety about running out of a charge and being stuck. In his interview, Shapps sought to ease anxiety by assuring the public that additional infrastructure for electric cars was part of the government’s budget.

“We have domestic car producers and we want to help them to transition so we are doing a lot of work,” Shapps said in his interview, as the Express reported. “In fact tomorrow I’m meeting with the car manufacturers on this very subject. We are putting in about £1.5billion at the moment and there is more to come.”

Prime Minister Boris Johnson has pledged that no driver will be more than 30 miles away from a charging station. Yet, a considerable investment is needed to make that claim a reality, according to the Express.

The commitment pairs the UK with several countries phasing out greenhouse gas emitting combustion engines, including Norway, which wants all new passenger cars and vans sold in the country to be zero-emission vehicles by 2025, and India, which has called for new cars sold there to be powered by electricity by 2030, as CNN reported.