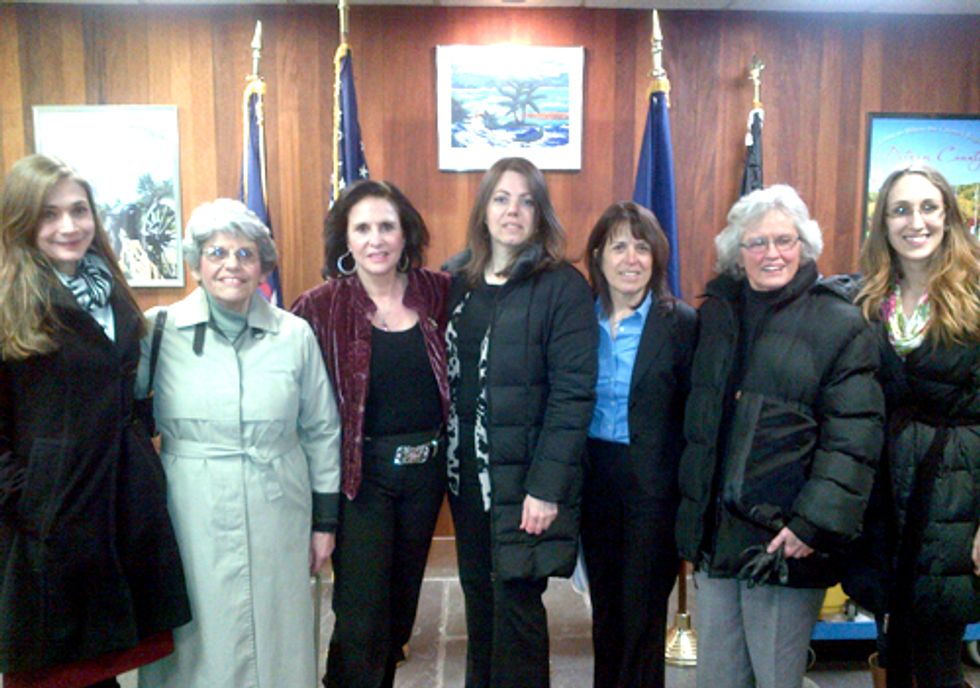 A coalition of health and environmental groups gathered in Carmel, New York yesterday following the meeting of the Putnam County Board of Legislators to congratulate the legislators for voting to prohibit the sale, application and disposal of waste products in the County from natural gas drilling operations.

The new law bans the sale of fracking waste, the processing of fracking waste at County and privately operated wastewater treatment plants, and the application of fracking brine on County roads and private property including applications for de-icing and dust control purposes. Putnam County joins the ranks of other county governments, including Westchester and Ulster Counties, that have already enacted similar legislation to protect their water supplies and the health and safety of their residents by banning radioactive gas drilling waste. The groups are urging County Executive MaryEllen Odell to sign the legislation immediately and are also strongly urging local Putnam municipalities to adopt similar local laws without delay.

All gas drilling technologies involve the use of hundreds of toxic chemicals and large quantities of water to extract the gas from deep underground. Much of this highly toxic mixture returns to the surface with the gas along with other contaminants including heavy metals, volatile organic compounds, brine (approximately eight times saltier than sea water) and high levels of naturally occurring radioactive materials, including radium-226 and radium-228, which are known human carcinogens. Radium-226 has a half-life of 1600 years and is linked to bone, liver and breast cancers. Other chemicals in fracking fluid are known carcinogens and endocrine disruptors.

"Whether or not high-volume hydrofracking is permitted in New York State, the disposal of highly contaminated and radioactive gas drilling wastewater, drill cuttings and sludge poses an immediate public health threat for all New Yorkers. Waste from active vertical gas wells in New York State as well as hydrofracking operations in Pennsylvania is being spread on New York roads for de-icing and dust control and being accepted by New York landfills, and wastewater treatment facilities," said Ellen Weininger, educational outreach director for Grassroots Environmental Education.

"With lax oversight from the state and absence of federal and state regulations, local governments are filling the void and stepping in to protect their residents from dangerous exposures. We commend the Putnam County Board of Legislators for fulfilling that responsibility entrusted to them by passing this critically important legislation and strongly urge Putnam municipalities to take immediate steps to protect the public health of their residents by enacting similar legislation."

Kate Hudson, watershed program director at Riverkeeper, said, "This legislation is a crucial step toward protecting Putnam County residents from the harmful health effects of improper handling and disposal of fracking waste. It is extremely important for Putnam municipalities to act quickly to pass legislation to prohibit the spreading of fracking brine on town roads and properties and prevent the acceptance of fracking waste at locally-owned waste water treatment facilities. We strongly encourage Putnam towns to act in concert with other municipalities across the state that have enacted similar bans to further safeguard Putnam’s drinking water supplies from heavy metals, naturally occurring radioactive materials, brine and other pollutants that are the toxic byproducts of fracking."

“Thanks to the Putnam County Legislature for passing this important legislation to protect county residents and wildlife from radioactive and chemically toxic waste,” says Paula Clair, concerned Putnam County resident. “Since companies from nearby areas in Pennsylvania and New York have large quantities of this waste to dispose, we look to our towns to enact similar protection within their borders.”

Radioactive, toxic waste from gas drilling activities can potentially cause irreversible damage to water, air, land, soil and food supplies. Although this waste is hazardous and in fact exceeds the legal criteria for hazardous waste classification, it is categorized as “industrial” under federal and state laws as a result of special exemptions given to the oil and gas industry. These exemptions eliminate tracking requirements for its handling, storage, treatment and disposal of the waste.

Wastewater treatment facilities are not designed to treat chemicals, contaminants and highly radioactive materials present in hydrofracking waste. High bromide levels in this waste are highly corrosive to equipment and can react during water treatment to form brominated trihalomethanes, which are linked to bladder and colon cancers and are associated with birth defects.