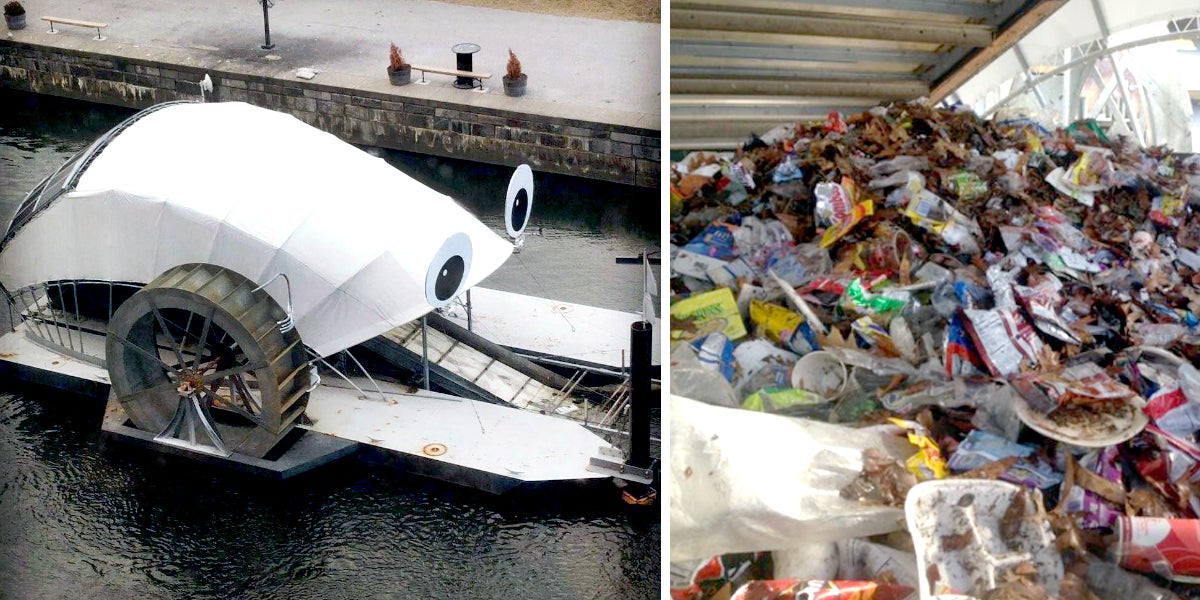 Mr. Trash Wheel, located at the mouth of Jones Falls, has stopped more than one million pounds of garbage from entering Baltimore’s Inner Harbor
since its installation in May 2014. Because it has been so effective, a second water wheel, “Professor Trash Wheel,” was installed at Harris Creek Park in Canton and opened this past December.

When one Redditor asked, “If there were a 6th season of The Wire centering around trash in the Inner Harbor, what would the main plot points be? What roles would you and Professor Trash Wheel play?”

“Here’s the plot: Trash is over flowing the streets of Baltimore. Trash storms plague the city on a regular basis and micro plastics have formed a choking fog that sits on the city at all times. Professor Trash Wheel believes she can work within the system to get litter of the streets. She creates coalitions with nonprofits and government agencies to battle the rising tide of trash. Mr. Trash Wheel obeys no law or man. He goes rogue attacking trash on the streets, in the harbor, wherever he can find it. Who will win out? Find out on Season 6 of the Wire. David Simon, you have my number. Stop ignoring my texts”

The wheels are a part of the Waterfront Partnership‘s Healthy Harbor Initiative, which aims to make Baltimore Harbor swimmable and fishable by 2020.

The iconic harbor is “polluted by millions of gallons of sewage, hundreds of tons of trash, and stormwater runoff are polluting the harbor and streams every year,” the local environmental nonprofit states on its website.

“These conditions are threatening the lives of the fish, crabs, turtles, birds, and river otters that are part of the harbor, and even simple contact with the water can be dangerous due to the threat of waterborne diseases.”

The Baltimore Sun reported that local environmentalists would like to see at least two more water wheels to address the city’s litter problem.

So how do these devices work? Using water currents, trash and debris floats into containment booms in front of the wheel. The trash moves onto a conveyor belt that leads to a dumpster barge. When the dumpster is full, the trash is towed away. A backup solar panel array powers the wheel when the current is not strong enough.

The collected material is weighed and separated into different categories: plastic bottles, polystyrene containers, cigarette butts, glass bottles, grocery bags and chip bags. Some of the trash is incinerated to help generate electricity for the city.

The trash wheel’s creator, John Kellett, told National Geographic that it’s a common misconception that people are littering directly into the water. Instead, most of the garbage—such as trash thrown from cars, illegal dumping and cigarettes butts—ends up in the watershed after it rains.

“If it rains, there is always trash,” Kellett told the publication.

In about two-and-a-half years, Mr. Trash Wheel has picked up almost nine million cigarette butts and more than 300,000 plastic bags. It also picks up an average of 14,000 Styrofoam containers a month.

According to National Geographic, “the data is used to support environmental legislation. For example, the Waterfront Partnership recently supported a bill that would ban Styrofoam containers.”