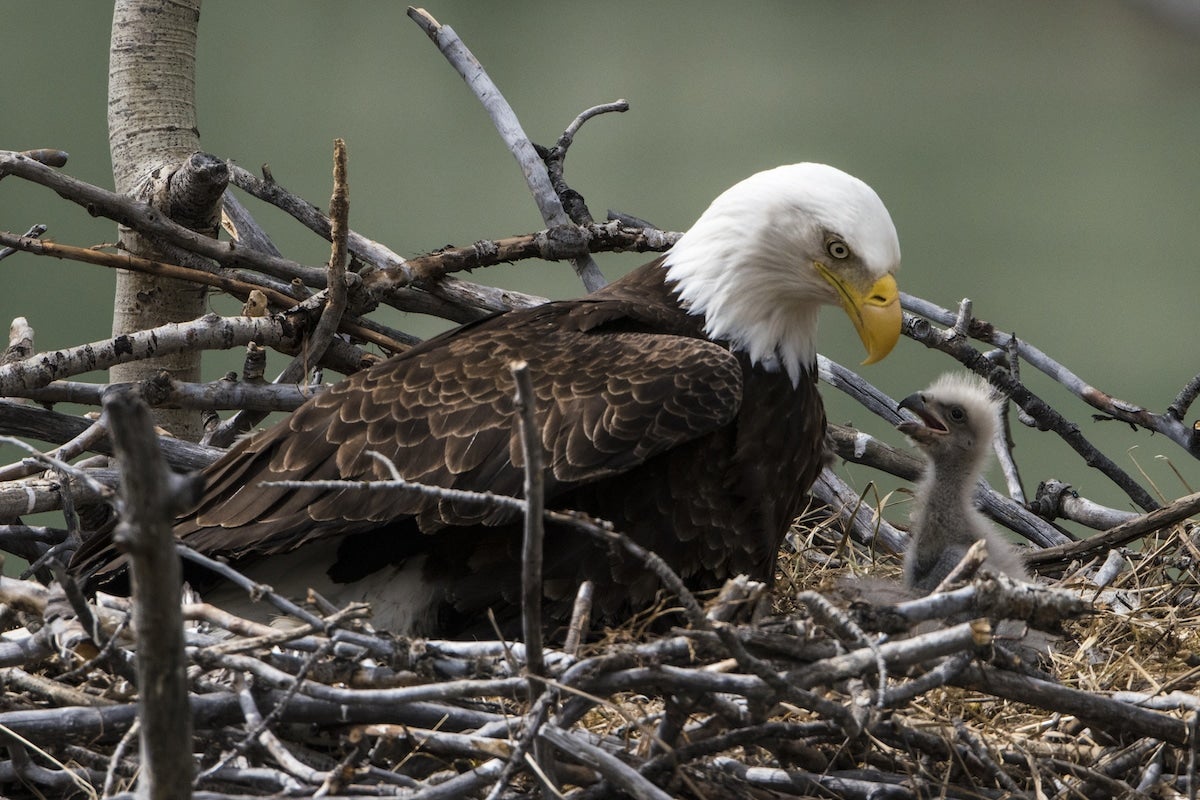 After rebounding from the brink of extinction, America’s national bird is facing chronic lead poisoning. Nearly half of bald eagles — 46 percent — and 47 percent of golden eagles tested in 38 states were found to have had chronic exposure to lead, reported NBC News. The eagles were often exposed through the ingestion of prey contaminated by lead ammunition, according to a new study published in the journal Science, Phys.org reported.

Scientists tested the blood, feathers, bones and livers of 1,210 eagles for lead exposure.

“This is the first time for any wildlife species that we’ve been able to evaluate lead exposure and population level consequences at a continental scale,” said study co-author and wildlife biologist with the U.S. Geological Survey in Boise, Idaho, Todd Katzner, reported Phys.org. “It’s sort of stunning that nearly 50% of them are getting repeatedly exposed to lead.”

Even at low levels, lead can affect an eagle’s ability to fly and reproduce.

According to the study, the yearly population growth of bald eagles was reduced by an estimated four percent due to lead exposure, and by one percent for golden eagles, Phys.org reported.

“When you look at lead levels in bone, these birds are getting exposed repeatedly to lead over their lives,” said Katzner, as reported by NBC News. “It’s happening again and again.”

Bald eagle populations rebounded after the pesticide DDT was banned in 1972 and they were taken off the U.S. Endangered Species List in 2007, as reported by Phys.org.

Toxic lead exposure in eagles had been seen regionally in earlier studies, but had not been shown to be as widespread as shown in the most recent study.

“Lead is present on the landscape and available to these birds more than we previously thought,” said Slabe, Phys.org reported. “A lead fragment the size of the end of a pin is large enough to cause mortality in an eagle.”

Lead exposure was found to be higher during the fall and winter, which is when many states have their hunting season. And hunting can mean lead bullets, which lead to high levels of lead in the carcasses that eagles scavenge upon.

Copper bullets are an option for hunters who want to move away from lead bullets.

Lead ammunition was banned for use by hunters in California in 2019, NBC News reported.

Victoria Hall, veterinarian and executive director at the University of Minnesota’s Raptor Center, said that “85 to 90% of the eagles that come into our hospital have some level of lead in their blood,” and that they often have lead bullet fragments in their stomachs, reported Phys.org.

Hall said eagles can be treated for lead exposure if their levels of lead aren’t too high.

“[B]ald eagles are like the canary in the coal mine,” said avian director at Alaska Raptor Center, a nonprofit wildlife rescue in Sitka, Alaska, Jennifer Cedarleaf. “They are the species that tells us: We have a bit of problem,” as reported by Phys.org.

According to last winter’s estimates by the U.S. Fish and Wildlife Service, there are more than 316,700 bald eagles in the U.S., including 71,400 nesting pairs, reported NBC News. But that doesn’t mean that eagles are without threats, as the lead exposure data shows.

“Even though the population seems like it’s recovered, some perturbation could come along that could cause eagles to decline again,” said wildlife disease ecologist at Cornell University’s College of Veterinary Medicine Krysten Schuler, who was not involved in the study, in a statement last month, The Hill reported.

Exposure to lead can reduce the ability of eagles to deal with other threats like climate change, Phys.org reported.

“When we talk about recovery, it’s not really the end of the story — there are still threats to bald eagles,” Schuler said, as Phys.org reported.

Cedarleaf said that lead affects many other birds, like hawks, vultures and ravens.

“The more it’s studied, the more we find it,” assistant director at the Center for Avian Population Studies at Cornell University Viviana Ruiz-Gutiérrez, who wasn’t part of the research team, said, as NBC News reported. “We’re really finding it in bald and golden eagles because they are of interest legally, federally.”

The study brings new attention to the dangers of lead ammunition for wildlife.