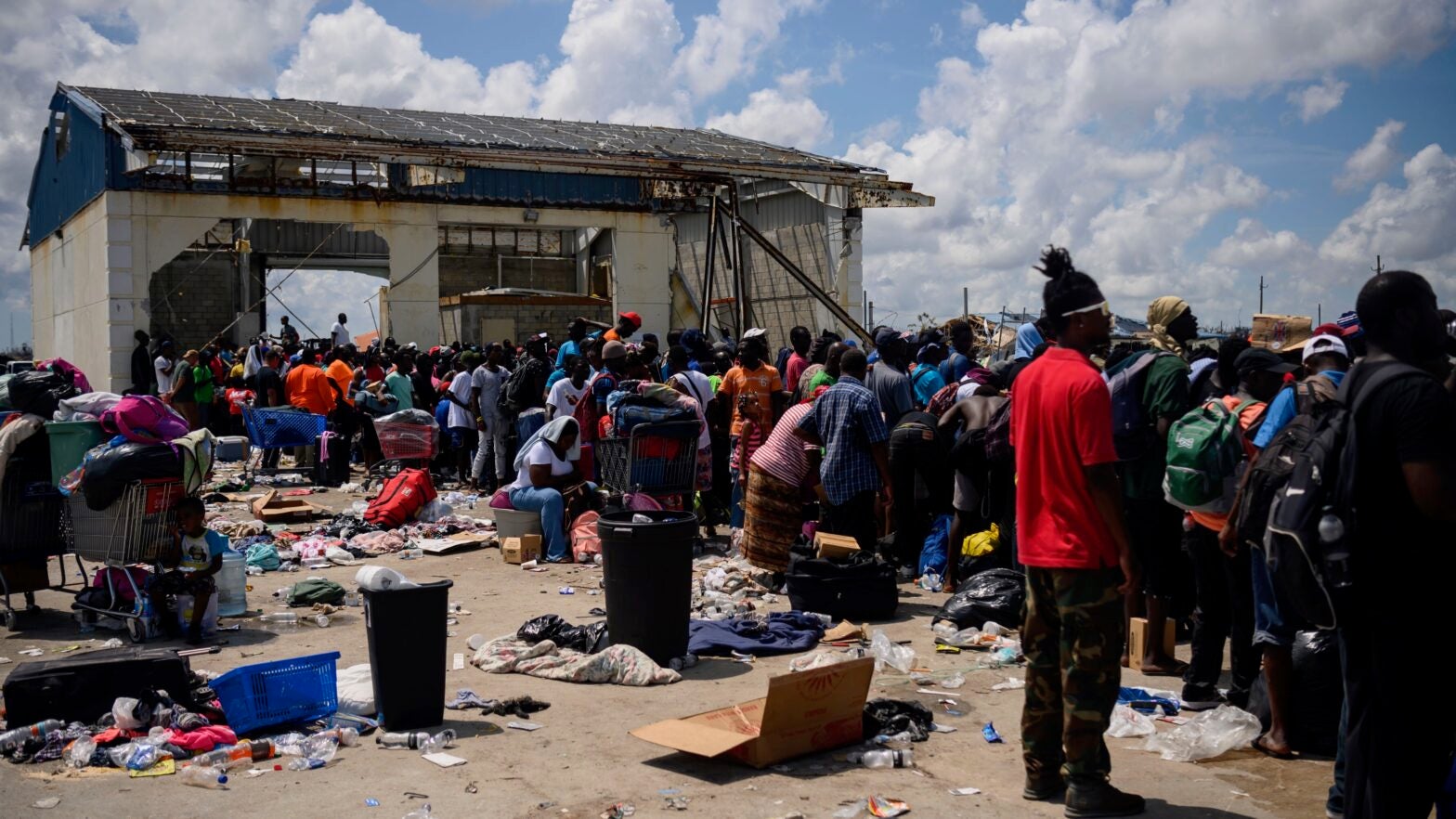 Hundreds of those displaced by Hurricane Dorian gather at a port that was turned into a distribution and evacuation center in Marsh Harbour, Bahamas on Sept. 7. Carolyn Van Houten / The Washington Post / Getty Images

The Trump administration will not grant temporary protected status to people evacuating the Bahamas after Hurricane Dorian, the White House announced Wednesday. On the same day, Bahamian authorities said that around 2,500 people are listed as missing after the strongest storm to ever hit the country.

Temporary protected status would have allowed Bahamians displaced by the hurricane to live and work in the U.S. until it is safe for them to return home, NBC News explained. Currently, more than 300,000 people from 10 countries are living in the U.S. with this status, including evacuees from the 2010 Haitian earthquake. Bahamians can still travel to the U.S. with the right documents, but will not be able to work.

TPS: A form of humanitarian relief for people who face extreme hardship if forced to stay/return to countries devastated by armed conflict or natural disasters.

It would’ve allowed Bahamians to work & live in the US until safe to return after Dorian. https://t.co/Rr5ZUOGKdy

“The Bahamians impacted by Hurricane Dorian are facing a humanitarian crisis, and the American government, international partners and private organizations continue to support them with aid and services. At this time, we do not plan to invoke Temporary Protected Status for those currently in the United States,” a White House official said, as Reuters reported.

Acting Customs and Border Protection Commissioner Mark Morgan said Monday it would be “appropriate” to extend the status to Dorian evacuees, but President Donald Trump appeared to oppose the idea later, as CNN reported.

The news also comes days after Dorian evacuees were ordered off a ferry from Freeport in the Bahamas to Florida if they did not have visas. Bahamians are typically allowed to enter the U.S. with just a passport and clean criminal record, but the U.S. Department of Homeland Security announced Monday that Bahamians traveling by sea now need a visa, Reuters reported.

The administration’s decisions raised concerns about how it would respond to current and future climate refugees. Extreme weather events displaced two million people in 2018, and between 150 and 300 million are likely to be displaced by 2050.

“Stop saying the US doesn’t have a climate policy. We do. It’s monstrous,” climate scientist Dr. Kate Marvel tweeted in response to Trump’s remarks.

Stop saying the US doesn’t have a climate policy. We do. It’s monstrous. https://t.co/J6G6NX6UKc

Meanwhile, the Bahamas continue to grapple with Dorian’s toll. The government announced that around 2,500 were still missing Wednesday, though that number may include people who evacuated to shelters, Reuters reported.

Bahamian Prime Minister Hubert Minnis said the death toll was currently at 50, but the number missing meant it would likely not stay there.

“The number of deaths is expected to significantly increase,” he said.

And for the survivors, these numbers are personal.

“My friends are missing, a few of my cousins are missing over there, five in total, they lived in Marsh Harbour,” 38-year-old tour guide Clara Bain told Reuters. “Everyone on the islands are missing someone, it’s really devastating.”

So far, around 5,000 people have been evacuated from the Grand Bahama and Abacos Islands, the islands most devastated by the storm, while 6,000 to 7,000 remain, as BBC News reported.

Hundreds are living in temporary shelters in the capital of Nassau, and there are plans to build two tent cities near Marsh Harbour on Great Abaco Island. Around 90 percent of homes and buildings in the town were damaged or destroyed, Reuters reported.