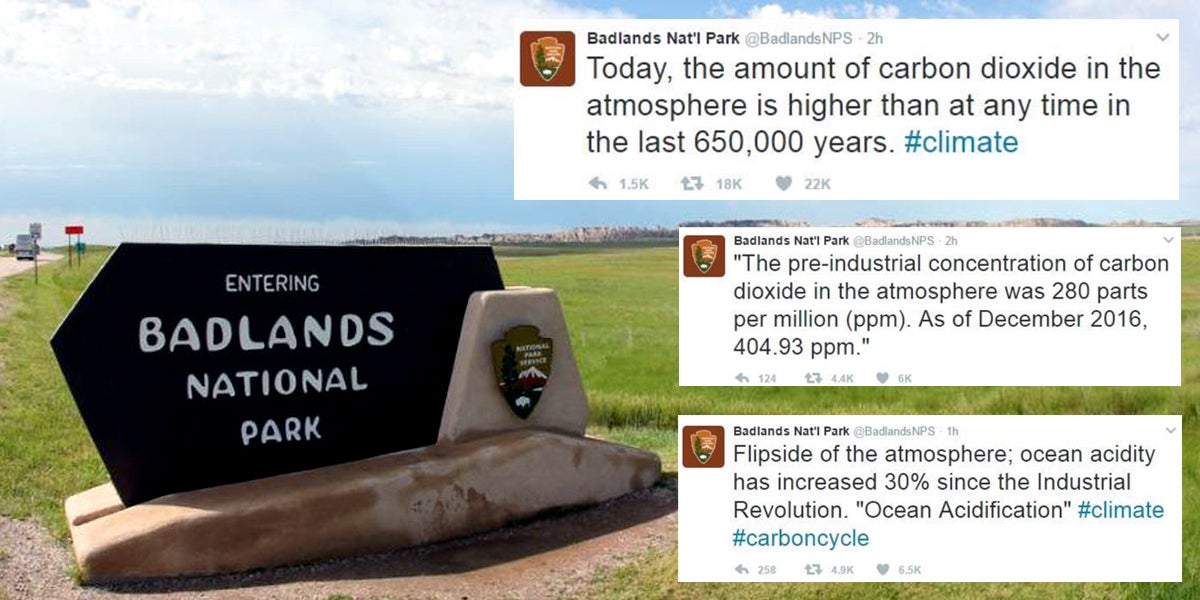 In a political era where “alternative facts” are used in place of actual facts, several government bodies have been tweeting doses of reality in defiance of President Donald Trump and his many controversial stances. That is, until someone at 1600 Pennsylvania Ave. notices and forces them to delete their social media missives.

The Badlands National Park in South Dakota really lived up to its name after tweeting out several posts about
climate change Tuesday afternoon, countering the president and most of his administration’s notorious skepticism of climate science.

“The pre-industrial concentration of carbon dioxide in the atmosphere was 280 parts per million (ppm). As of December 2016, 404.93 ppm,” the first post read.

A second tweet read, “Today, the amount of carbon dioxide in the atmosphere is higher than at any time in the last 650,000 years. #climate”.

The third, “Flipside of the atmosphere; ocean acidity has increased 30 percent since the Industrial Revolution. ‘Ocean Acidification’ #climate #carboncycle”.

Finally, the fourth post stated that “Burning one gallon of gasoline puts nearly 20lbs of carbon dioxide into our atmosphere. #climate”.

Although these tweets have since been removed, whoever was tweeting from the Badlands account was particularly audacious. The Badlands social media hero tweeted in spite of the Trump administration’s earlier Twitter gag order on the entire National Park Service.

It all started on the day of the presidential inauguration on Jan. 20 when the National Park Service retweeted these two critical tweets about the new Commander in Chief, including one that poked fun of the size of Trump’s crowd compared to President Obama’s.

Someone at the Trump Administration noticed shortly after and forced the National Park Service to temporarily
shut down its Twitter activity. As Gizmodo reported, here’s an email that was sent to National Park employees that Friday:

We have received direction from the Department through [the Washington Support Office] that directs all [Department of Interior] bureaus to immediately cease use of government Twitter accounts until further notice.

PWR parks that use Twitter as part of their crisis communications plans need to alter their contingency plans to accommodate this requirement. Please ensure all scheduled posts are deleted and automated cross-platform social media connections to your twitter accounts are severed. The expectation is that there will be absolutely no posts to Twitter.

In summary, this Twitter stand down means we will cease use of Twitter immediately. However, there is no need to suspend or delete government accounts until directed.

This does not affect use of other approved social media platforms. We expect further guidance to come next week and we will share accordingly.

Thanks for your help!

The National Park Service’s Twitter account has since been revived and issued an apology about its “mistaken” retweets.

We regret the mistaken RTs from our account yesterday and look forward to continuing to share the beauty and history of our parks with you pic.twitter.com/mctNNvlrmv

As
Gizmodo surmised, one reason that the National Park Service might be sour at Trump is due to his nomination U.S. Rep. Ryan Zinke for Secretary of the Interior, who will be tasked with the president’s plans to drill federal lands, including National Parks, for more energy development. Zinke is a climate change skeptic and coal mining advocate.

Even though Trump
has previously said that he wants to keep public lands “great” and is “not looking to sell off land,” that doesn’t mean the leasing of public lands and waters for energy production is off the table.

The Trump Administration’s Twitter takedowns are particularly concerning as it emerged today that staffers at several federal agencies dealing with scientific data and environmental policy—including the Environmental Protection Agency, Department of Agriculture, National Park Service, Department of Transportation and Health and Human Services—have reportedly received various degrees of formal instruction barring them from speaking to press or using social media.

“These actions will stem the free flow of information and have a chilling effect on staff in these agencies,” Sam Adams, U.S. director of the World Resources Institute, said. “This flies in the face of effective policymaking which requires an open exchange of ideas, supported by the best science and evidence available. Curtailing communications from these agencies will hinder their ability to provide clean air and water and protect people’s health across the country. The administration should lift these bans as soon as possible and ensure that the role of science is respected within our government agencies.”

But in a happy twist, despite the Trump Administration’s cone of silence, another plucky social media warrior from the Golden Gate National Park has
tweeted out this climate change fact that “2016 was the hottest year on record for the 3rd year in a row,” and included a link to a
report from NASA and NOAA announcing the startling fact.

2016 was the hottest year on record for the 3rd year in a row. Check out this @NASA & @NOAA report: https://t.co/rLJUC56xqi pic.twitter.com/AKhFzYw6l6

NASA also appears to be safe from Trump’s social media ban for now,
tweeting out this post on rising average global temperatures.

Quartz also noted that on Monday the Department of Defense tweeted about the connection of social media activity to a person’s mental health. Perhaps a cheeky reference to our Twitterer-in-Chief?

And, in a delightful turn of events, there’s now an “unofficial” National Park Service Twitter that has 363K followers and counting called @AltNatParkSer. The account is apparently operated by three rangers from Washington’s Mount Rainier who have posted the same climate change information deleted from other park accounts.

The best thing about the account is that the Trump administration cannot do anything to stop it since it’s unofficial.