Bad Fellas: The Guys Behind the So-Called FACT Act 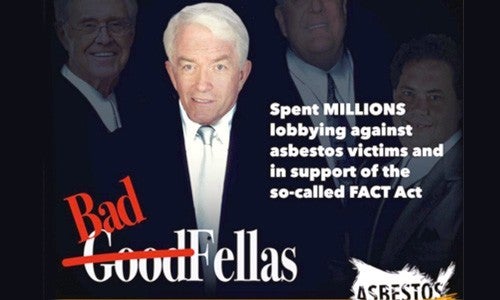 The U.S. Chamber of Commerce’s Institute for Legal Reform just devoted much of an entire day to bemoaning the proliferation of breaches of Americans’ personal data.

My colleagues and I at Environmental Working Group Action Fund find it impossible to take these complaints seriously when the chamber and institute are among the most zealous proponents of the so-called FACT Act (H.R. 526 and S. 357), federal legislation that would require public disclosure of asbestos disease victims’ intensely personal information on the Internet. The FACT Act would force them to give their full names and partial Social Security numbers and tell the world about their medical conditions and employment history. They would be prime targets for identity theft.

This year, the chamber and institute have spent more than $63 million combined to lobby for numerous bills, including FACT Act.

Environmental Working Group Action Fund sent a camera and crew to the event (well, outside of the building) to gauge how some of the conference guests felt about violating sick Americans’ privacy. Chamber President Tom Donohue spotted our people and turned down an alley.

Here is what a few other attendees had to say about the implications of the FACT Act for the privacy and financial security of asbestos victims:

6 Ways Your Home Can Make You Sick

The People vs. the Koch-Funded Asbestos Industry