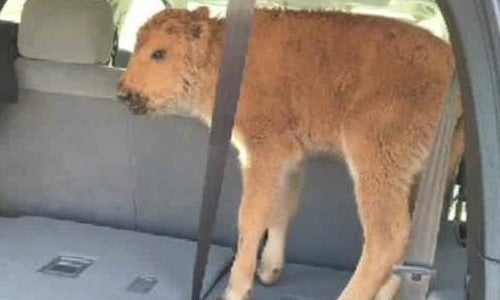 Yellowstone National Park has issued new rules to visitors after two well-meaning but “dumb tourists” inadvertently caused a newborn bison’s death after they put the animal in their SUV.

According to media reports, the pair came across the calf during a visit to the park’s Lamar Valley earlier this month. Fearing that the bison was cold, they “rescued” it by placing it into their car and transporting it to a park facility. The action, however, touched off an unfortunate series of events that ultimately led to the bison being put down.

After receiving the snatched animal, park rangers brought the calf back to where it was picked up by the tourists. Despite the rangers’ repeated attempts to reunite the calf with its herd, the young animal was rejected—most likely due to its handling by people. The calf then became a hazard as it continued to approach people and cars, which meant it had to be euthanized.

The two visitors were cited for touching park wildlife and fined $110, according to Yellowstone spokeswoman Charissa Reid.

Following the incident, the U.S. National Park Service felt it had to issue a public statement on how visitors should behave when coming close to park wildlife.

“Approaching wild animals can drastically affect their well-being and, in this case, their survival,” the federal agency said on its website. “Park regulations require that you stay at least 25 yards (23 m) away from all wildlife (including bison, elk and deer) and at least 100 yards (91 m) away from bears and wolves.”

“In recent weeks, visitors in the park have been engaging in inappropriate, dangerous and illegal behavior with wildlife. These actions endanger people and have now resulted in the death of a newborn bison calf,” the park service said. “In terms of human safety, this was a dangerous activity because adult animals are very protective of their young and will act aggressively to defend them.

“In addition, interference by people can cause mothers to reject their offspring. In this case, park rangers tried repeatedly to reunite the newborn bison calf with the herd. These efforts failed. The bison calf was later euthanized because it was abandoned and causing a dangerous situation by continually approaching people and cars along the roadway.”

The park service highlighted a recent viral video, where a visitor approached within an arm’s length of an adult bison in the Old Faithful area.

There have been other recent instances where humans have come dangerously close to the animals, including an incident last year when visitors posed for selfies with bison at extremely unsafe and illegal distances. Last summer, a total of five visitors were gored by bison for approaching the animals too closely.

“Bison injure more visitors to Yellowstone than any other animal,” the park service pointed out.

Bison biologist Rick Wallen told National Geographic that in the last couple of years there have been a lot more people, especially people associated with bus tour groups, invading the spaces of wildlife.

“I attribute some of the aggressive behavior to the impact of social media and the selfie craze where visitors try to get pictures of themselves standing as close to big animals as possible,” Wallen said. “They don’t realize the serious risks they’re taking. They’re setting themselves up to be candidates for a Darwin Award.”

With the rise of selfie culture, many celebrities such as Paris Hilton and Khole Kardashian have posted images of themselves on social media with endangered animals that they might not realize were illegally obtained, GRASP coordinator Douglas Cress warned.