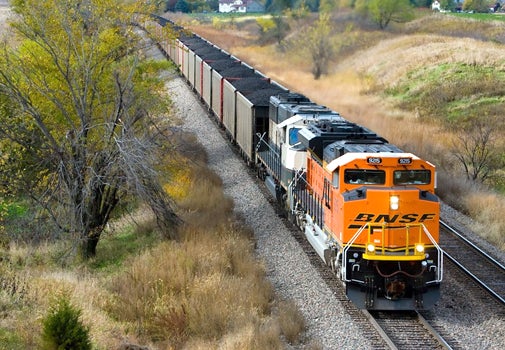 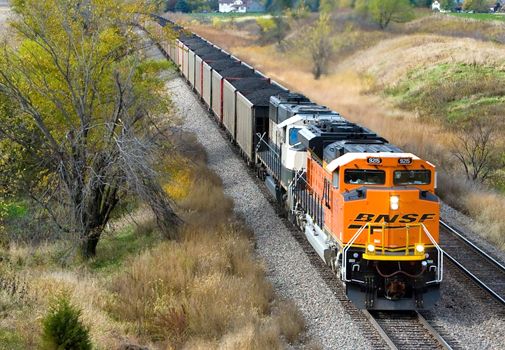 Warren Buffett, the third wealthiest man on the planet (net worth: $44 billion), often referred to as the “Oracle of Omaha,” is the target of a May 5 action called for by Stop Coal B.C. Well, not Buffett directly, but a rail company he owns through his massive holding company, Berkshire Hathaway: Burlington Northern Santa Fe (BNSF) Railway.

BNSF Railway is the second largest freight rail company in the U.S. and the exclusive carrier of thermal coal from coal basins in the northwestern U.S. to docks in British Columbia, where the dirty coal is exported to the global market, primarily to Asia.

The action calls for activists to blockade BNSF’s four coal-loaded freight trains from reaching their final destination for the day and in the process, risk arrest. It is part of 350.org‘s broader “Connect the Dots” event taking place on Saturday, with actions planned throughout the world.

We’re doing this because we have to. The science is solid: if we don’t get to work, within the decade we are going to run out of time to avoid runaway global warming. It’s not enough any more just to go to rallies, write letters, and have dinner in the dark once a year. We’re aware of what is at stake, and we have a moral obligation to do our best to stop the things that are destroying the planet.

We really don’t want to spend the day on the tracks and risk arrest by stopping coal trains, but we’re running out of options. We’re forced to take this dramatic step to get government’s attention, because in addition to ignoring the scientific warnings, they’ve refused to respond to our repeated requests for a public discussion on this issue.

We need a province-wide discussion about what is at risk for our families and communities, and how British Columbia can start working towards a healthy and secure future that is fair for all. We hope that discussion starts on May 5th.

The activists are planning to stop all loaded BNSF coal trains traveling in a northwest direction “that approach mile 122 (White Rock pier) on the New Westminster Subdivision, Northwest Division,” explains a letter written directly to Warren Buffett from Stop Coal B.C. “From dawn to dusk on May 5th we will also stop all unloaded coal trains traveling [southeast] approaching mile 122.”

Stop Coal B.C. also made it clear that they are attempting to stop the coal trains, not passenger rail trains, which they support as a way to remove cars from the road, moving in the direction of a society maximizing the use of public transit. When the Amtrak roles through, they will step off the tracks.

Also included in the call to action’s letter to Buffett is a request of him to mandate that BNSF exit the business of coal transport:

Since we know what is at stake we feel a moral obligation to do what we can to help prevent this looming disaster. On Saturday May 5th that means stopping your coal trains from reaching our ports.

What we can’t understand is why you allow your railway, Burlington Northern Santa Fe, to continue shipping vast amounts of U.S. coal out of Canadian ports to be burned in Asia. No matter where this coal is burned, it brings us closer to a climatic point of no return.

You are in many ways an important figure of conscience in the world. We appeal to you to seize this opportunity and make a bold decision on coal. With your support we can ensure a healthy future for our children and people around the world.

This is no small fight Stop Coal B.C. is waging, to say the least.

As they explained in a primer emailed to DeSmogBlog:

“Over twelve million tonnes of thermal coal was shipped out of the Port of Vancouver last year. Much of that is now coming from the United States’ Powder River Basin coal bed. Thermal coal from Wyoming and Montana’s Powder River Basin is also being shipped up to Ridley Terminal in Prince Rupert for export. Approximately two coal trains a day, each carrying roughly 13,000 tonnes of coal, cross our Washington State border en route to B.C. ports.”

Coal use in the U.S., as Grist‘s David Roberts explained recently, is on the decline in the U.S.—mostly due to the domestic fracking boom—so coal mining companies need the global export market to keep afloat. DeSmogBlog’s Ben Jervey recently tackled the topic, as well.

The ties that bind Buffett to King Coal go far above and beyond B.C., though.

Buffett also owns a major stake in coal-fired power plants, via another corporation held under the auspices of Berkshire Hathaway. Further, BNSF also transports tons of coal throughout the contiguous lower 48 in the U.S.

Energy investor Nigam Arora explained some of these ties in a recent article appearing in Forbes, writing,

According to Sue Sturgis, “Coal’s ticking timebomb: Could disaster strike a coal ash dump near you?,” Institute for Southern Studies, January 4, 2009, Council Bluffs Energy Center was ranked 35th on the list of most polluting coal plant, with 1,092,320 pounds of coal combustion waste released to surface.

President Obama needs to be called out for his less than transparent catering to his long-time billionaire and coal-profiteering friends.

Consider this: One month after jointly visiting Arch Coal‘s mammoth Black Thunder strip mine in Wyoming with a fleet of nine private jets, billionaires Bill Gates and Warren Buffett sat in President Obama’s Oval Office on December 14th and discussed ways to improve the economy.

As the CEO of Berkshire Hathaway, Buffett understands the economics of coal better than anyone: He owns the Burlington Northern Santa Fe Railroad that transports most of Wyoming’s vast coal supply around the country, along with the utility company, MidAmerican Energy, which operates 11 coal-fired power plants, including four in Wyoming.

The Buffett/Gates trip Biggers covered took place roughly one year after another key Buffett/Gates visit to the Alberta Tar Sands in August 2008, in which the two of them, according to an unidentified source, “took in the oilsands, apparently with awe.”

“The Best Democracy Money Can Buy”

As covered in a recent investigation by DeSmogBlog, Buffett stands to make billions of dollars off of Alberta Tar Sands development, via BNSF’s transport capacity, with or without the Keystone XL pipeline, a pipeline which has been at the center of the North American climate and energy debate.

Buffett also is a major contributor to Barack Obama, whose campaign is using the Buffett name frequently to raise cash for the 2012 election.

This is, of course, is the money that can be publicly tracked. Then there’s the totally secret Super PAC money flowing into dark money fronts like Priorities USA Action, an after-product of the Citizens United U.S. Supreme Court decision.

Investigative journalist Greg Palast wrote his book The Best Democracy Money Can Buy in 2002. The title of his book is more true than ever 10 years later.