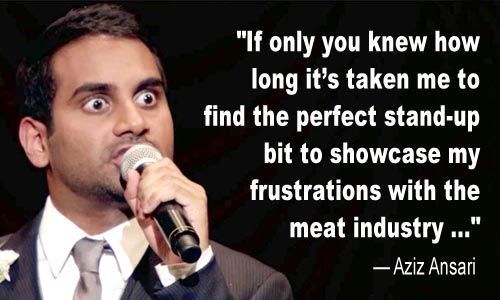 Aziz Ansari is having quite the year. The seventh and final season of Parks and Recreation wrapped up earlier this year. His book Modern Romance was released this summer. And this fall, his show Master of None, which he co-created and starred in, debuted on Netflix. In his stand up special, which is also available on Netflix, he blasts the egg industry for its cruel treatment of chickens.

Ansari is not the first big name to draw attention to this issue: Ryan Gosling, Brad Pitt and Bill Maher have all called out Costco for buying from egg suppliers that have abhorrent factory farming conditions. And the issue has certainly gotten a lot of attention recently with the Cornucopia Institute exposing the fact that millions of “organic” eggs come from factory farms.

But Ansari might have found best way yet to get the word out about factory farming.