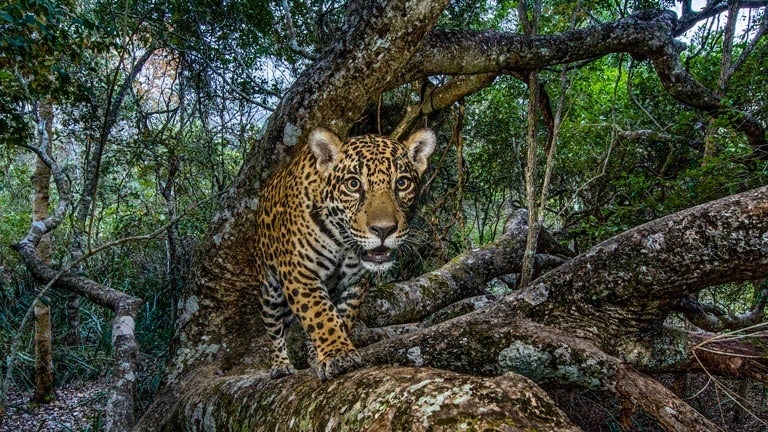 Jaguars face a number of threats, from habitat destruction and fragmentation for agriculture to poaching, trophy hunting and retaliatory killings by ranchers. The cats are estimated to have lost nearly half of their historic range and to have declined by as much as 20 to 25 percent over the past three generations, which is why the species is listed as nearly threatened on the IUCN Red List.

According to research published in the journal Conservation Science and Practice earlier this month, there may be an overlooked threat facing this most iconic of species: the booming ayahuasca tourism industry.

The trade in jaguar body parts is growing across Latin America, particularly in Bolivia, Brazil, Costa Rica, Peru and Suriname. Over the past few years, the most serious new threat to jaguars that has emerged is the illegal trade in jaguar fangs for the Chinese market. But according to a team of researchers led by Alexander Braczkowski of Australia’s University of Queensland, “commercialized ayahuasca tourism may be an undervalued contributor to the trade” in jaguar body parts. 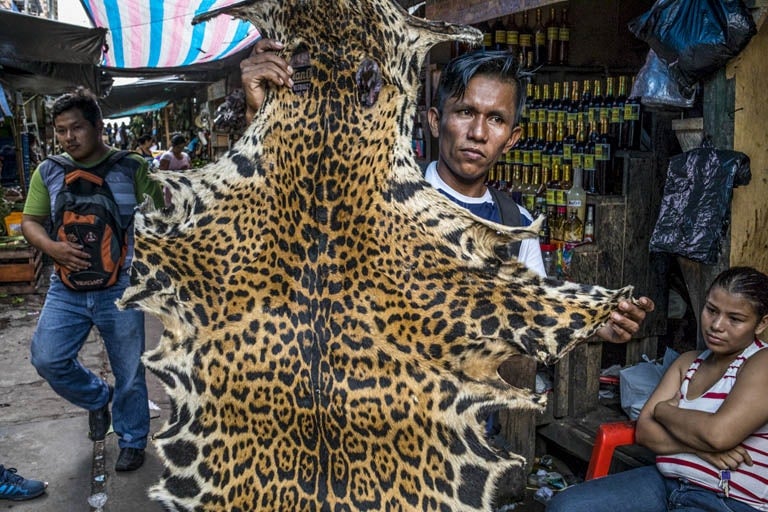 “In Southeast Asia, jaguar claws and teeth are worn as jewellery; their skins are bought for home decor; and a glue paste (made from boiled jaguar parts) is consumed to heal various ailments,” Braczkowski and co-authors write in the paper. “Most organized trafficking appears to be by contractors working for foreign companies hired to hunt cats to export body parts. With Latin America’s current ayahuasca and shamanic tourist boom there are additional demands for jaguar products.”

Braczkowski and the team conducted an investigation between August 2016 and August 2019 into the jaguar parts trade in markets in three Peruvian cities that are considered top ayahuasca tourism destinations: Lima, Iquitos and Pucallpa. They found jaguar skins for sale at prices ranging from to 2, paws that could be purchased for , jaguar skin purses available for , and stuffed jaguars heads for which the asking price was anywhere from to . Jaguar canines can fetch between and 2 each.

“Every single place we went to look for jaguar skins, jaguar teeth, we found them,” Sharon Guynup, a co-author of the paper, told Mongabay. 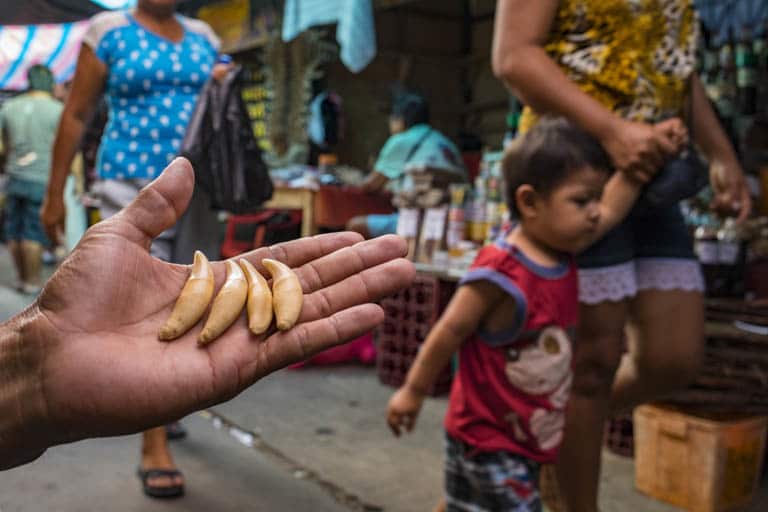 Through discussions with street vendors, shamans and people working in the tourism industry, the researchers found that jaguar canine pendants, jaguar skin bracelets and other jaguar products are being sold to tourists under the pretense that they somehow enhance the ayahuasca experience. Ayahuasca is a psychoactive brew made from the ayahuasca vine (Banisteriopsis caapi) and chakruna leaves (Psychotria viridis). It has traditionally been used for spiritual and physical healing in ritual shamanic ceremonies, but has also become popular among recreational users in recent decades.

“This appears to be a case of rebranding, specifically using ‘ayahuasca marketing’ for sellers to charge a premium on jaguar parts,” the researchers write in the paper. “Local indigenous shamans and healers from the Pucallpa area (Shipibo, Conibo, and Ashaninka ethnicities) denied the notion that jaguar parts enhance the ayahuasca experience for visiting tourists, and suggested that this practice is being marketed by ‘charlatan shamans’ seeking financial gain from the ayahuasca boom.”

The researchers suggest that one way to effectively halt this growing illicit trade is to more formally regulate ayahuasca tourism and educate both tourists and tour operators. “The shamans we encountered in Iquitos and Pucallpa stressed the importance of the jaguar to the Amazon ecosystem and as a powerful totem in the spiritual world,” they write in the paper. “The leadership of ayahuasca retreats could be important champions for jaguar conservation in Peru, Costa Rica, Colombia, Brazil, and other regions where ayahuasca is used, and they could discourage tourists from using jaguar parts.” 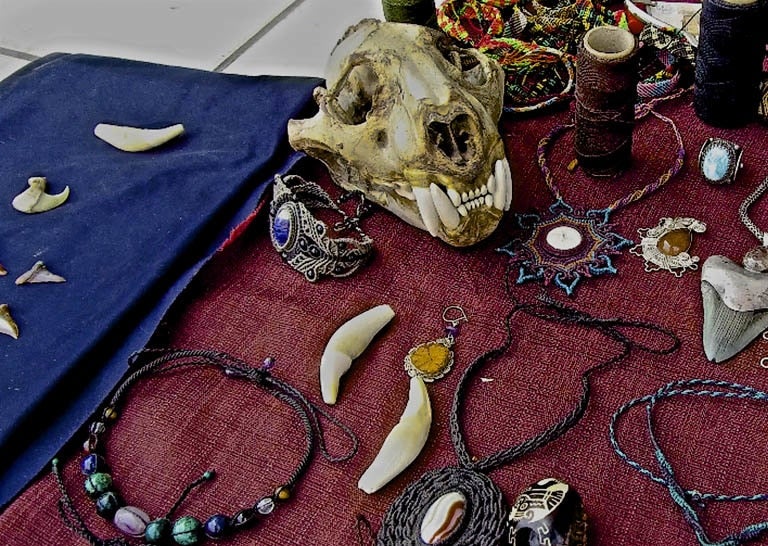 Jaguar teeth and a jaguar skull for sale in a craft market in Yarinacocha Market, Pucallpa. Alex Braczkowski / Mongabay

Peru already has a national anti‐wildlife trafficking policy in place that punishes traffickers with a prison sentence of 3 to 5 years. Guynup said that, during their investigation of local markets, the researchers found a number of purveyors of jaguar products who exercised caution in their dealings with would-be buyers, suggesting that there has been some enforcement of anti-wildlife trafficking laws. But she called for the government of Peru to be more aggressive in enforcing its laws.

“The Peruvian government needs to recognize that this is happening and address it. There are good wildlife laws in Peru, I think they need to be better enforced and if they’re not, there’s very little reason for this trade to end,” Guynup said.

“A big factor here is also education, for ayahuasca tourists and for tourists in general, not only on the plight of jaguars but the plight of endangered species in general. It’s not that this trade is specifically [due to] ayahuasca tourism, there’s a much broader trade that does include trade to Asia. But this is a piece of the puzzle and it’s really important for potential consumers to be aware of this and not participate.” 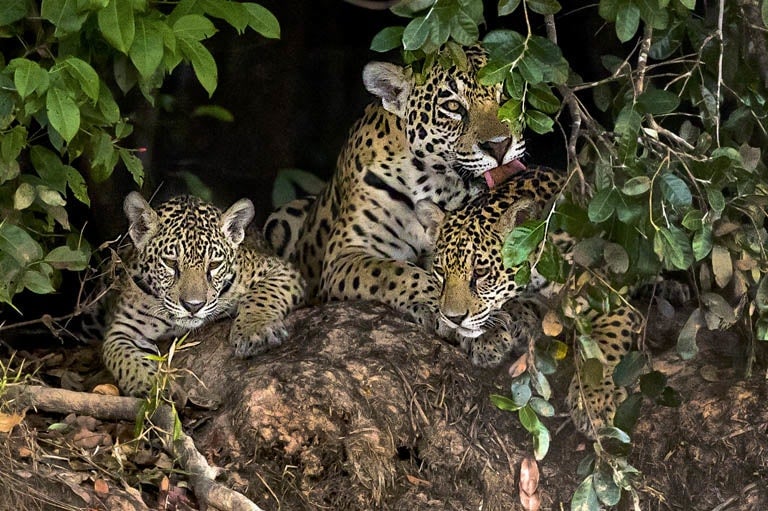 Note: A co-author of the paper, Romi Castagnino, works for Mongabay LatAm. She had no editorial input on this article.

Reposted with permission from our media partner Mongabay.