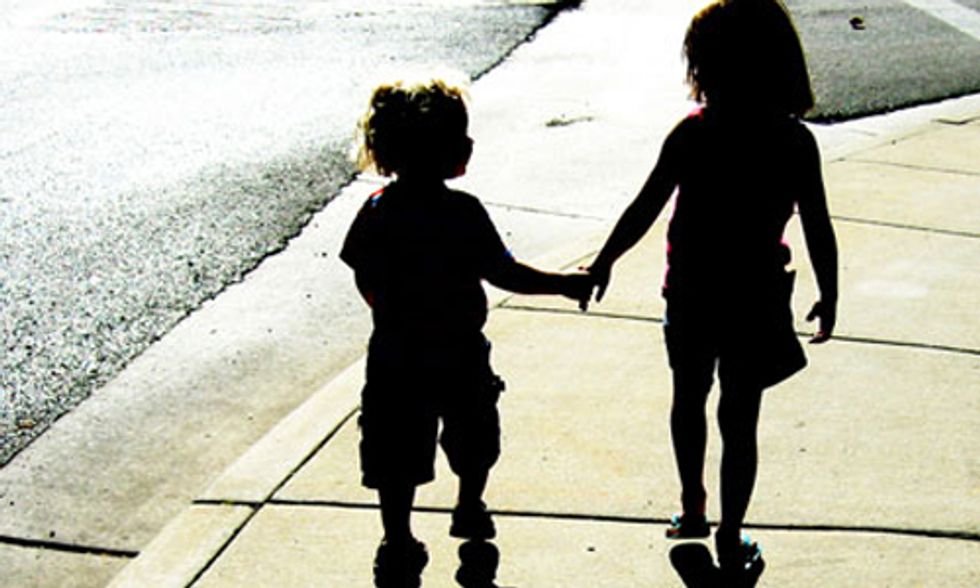 Babies whose moms lived within a mile of crops treated with widely used pesticides were more likely to develop autism, according to new research published today.

The study of 970 children, born in farm-rich areas of Northern California, is part of the largest project to date that is exploring links between autism and environmental exposures.

One in every 68 U.S. children has been identified with an autism spectrum disorder. Photo credit: hepingting/flickr

The University of California, Davis research—which used women’s addresses to determine their proximity to insecticide-treated fields—is the third project to link prenatal insecticide exposures to autism and related disorders.

“The weight of evidence is beginning to suggest that mothers’ exposures during pregnancy may play a role in the development of autism spectrum disorders,” said Kim Harley, associate director of University of California, Berkeley's Center for Environmental Research and Children's Health. She was not involved in the new study.

One in every 68 U.S. children has been identified with an autism spectrum disorder—a group of neurodevelopmental disorders characterized by difficulties with social interactions, according to the Centers for Disease Control and Prevention.

“This study does not show that pesticides are likely to cause autism, though it suggests that exposure to farming chemicals during pregnancy is probably not a good thing,” said Dr. Bennett Leventhal, a child psychiatrist at University of California, San Francisco who studies autistic children. He did not participate in the study.

The biggest known contributor to autism risk is having a family member with it. Siblings of a child with autism are 35 times more likely to develop it than those without an autistic brother or sister, according to the National Institutes of Health.

By comparison, in the new study, children with mothers who lived less than one mile from fields treated with organophosphate pesticides during pregnancy were about 60 percent more likely to have autism than children whose mothers did not live close to treated fields. Most of the women lived in the Sacramento Valley.

When women in the second trimester lived near fields treated with chlorpyrifos – the most commonly applied organophosphate pesticide—their children were 3.3 times more likely to have autism, according to the study, published in the journal Environmental Health Perspectives.

Chlorpyrifos, once widely used to kill insects in homes and gardens, was banned for residential use in 2001 after it was linked to neurological effects in children. It is still widely used on crops, including nut trees, alfalfa, vegetables and fruits.

The study also is the first to report a link between pyrethroids and autism. Application of pyrethroids just prior to conception meant an increased risk of 82 percent, and during the third trimester, the risk was 87 percent higher.

That finding is particularly concerning because “pyrethroids were supposed to be better, safer alternatives to organophosphates,” said the study’s senior author, Irva Hertz-Picciotto, an epidemiologist who leads the UC-Davis project to investigate environmental and genetic links to autism.

Use of pyrethroids has increased in recent years, both on farms and in the home, due to bans of other insecticides. Some studies now suggest pyrethroids may carry risks for developing fetuses.

The autism risk that could be attributed to an individual pesticide is likely slight, said Alycia Halladay, senior director for environmental and clinical sciences at the nonprofit Autism Speaks. “We need to understand how multiple exposures interact with each other and with genetics to understand all that is involved in the causes of autism,” she said.

Women in the second trimester who lived near fields treated with chlorpyrifos were 3.3 times more likely to bear children who developed autism. Photo credit: Alex Torres/flickr

But while the risks reported in the study pale in comparison to some hereditary factors, Hertz-Picciotto said they are comparable to other risks for autism, such as advanced parental age or not taking prenatal vitamins.

“In any child who develops autism, a combination of genetic and environmental factors are at work. There’s an accumulation of insults to the system. What we’re seeing is that pesticides may be one more factor that for some kids may push them over the edge,” she said.

For the study, researchers obtained the women’s addresses and compared them to a state database that provides details about where, when and how often specific commercial pesticides were used. About one-third of the women lived within approximately one mile of pesticide-treated fields.

The researchers, however, do not know whether the women were exposed to the insecticides.

In 2012, the U.S. Environmental Protection Agency required buffers around fields near homes and schools to help reduce exposure to chlorpyrifos.

“Provided that pesticides are applied responsibly and according to federally mandated label instructions, people, including expectant mothers, should not be concerned about exposure to agricultural pesticides,” said Clare Thorpe, senior director of human health policy for CropLife America, which represents pesticide manufacturers.

More than 1.1 million tons of chlorpyrifos were applied to 22,000 California farms in 2012, down from 2 million pounds on 40,000 farms in 2005, according to the database from the state Department of Pesticide Regulation.

Most of the mothers lived near fields treated with several different pesticides over their pregnancies, so it’s difficult to tease apart the potential risk of individual chemicals, said epidemiologist Janie Shelton, the lead study author. Shelton is now a consulting scientist to the United Nations.

The study also reported an increased risk of developmental delays, but not autism, in kids whose moms lived near fields where carbamates, including methomyl and Sevin, were applied.

The researchers said that pesticides could impair brain development and signaling in a way that affects social interactions, learning and behavior.

Previous studies have also linked pesticide use in California to autism spectrum disorders. In 2007, Harley and colleagues found a two-fold increase in pervasive developmental disorders (the larger group to which autism belongs) among 531 children in California’s Salinas Valley whose mothers’ urine had higher levels of organophosphate pesticides. Another study from 2007 found that mothers who lived near fields with the highest applications of two now-banned pesticides—endosulfan and dicofol—were six times more likely to have kids with autism spectrum disorders.

In recent years, rates of autism have been on the rise in the U.S. Between 2012 and 2014 alone, rates jumped 30 percent. The increase has largely been attributed to changes in diagnostic criteria for autism.

One-third of the mothers in the study lived within one mile of treated fields. Photo credit: Donna Sutton/flickr

“Many children that we used to call intellectually disabled and many more with social deficits are now recognized as being on the autism spectrum,” said Kathy Katz, a pediatric psychologist at Georgetown University Medical Center in Washington, DC.

But some experts suggest that environmental exposures may also be contributing to the climbing rates. In California alone, autism diagnoses were up 600 percent between 1990 and 2001. Yet researchers found that only about one-third of the rise could be explained by changing diagnoses or kids being diagnosed at increasingly younger ages.

Earlier this year, scientists examining more than two million births in Sweden reported that inherited genes make up about 50 percent of a child’s autism risk, while environmental factors make up the other half.

It’s tempting to tie the increase in prevalence to environmental factors, said Halladay, but it’s hard to know for sure what’s going on, since some environmental risks have increased over the past few decades while others have decreased.

“Use of pesticides has gone up, so has autism. But air quality has also improved, and we know that air pollution plays a role in autism spectrum disorder risk,” she said.

Some studies are starting to look how environmental exposures may act differently in people whose genetics make them more susceptible. Earlier this year, researchers showed that people with a gene variant associated with autism and high exposure to air pollution had an increased risk of autism over people with the same gene variant but lower exposure to air pollution.

Next, Shelton hopes to look for autism risk from pesticide exposure among mothers with certain genetic variations.

“We need to know if some moms are at higher risk than others and what that risk is. Knowing who is most vulnerable is key to understanding how to better protect them,” she said.