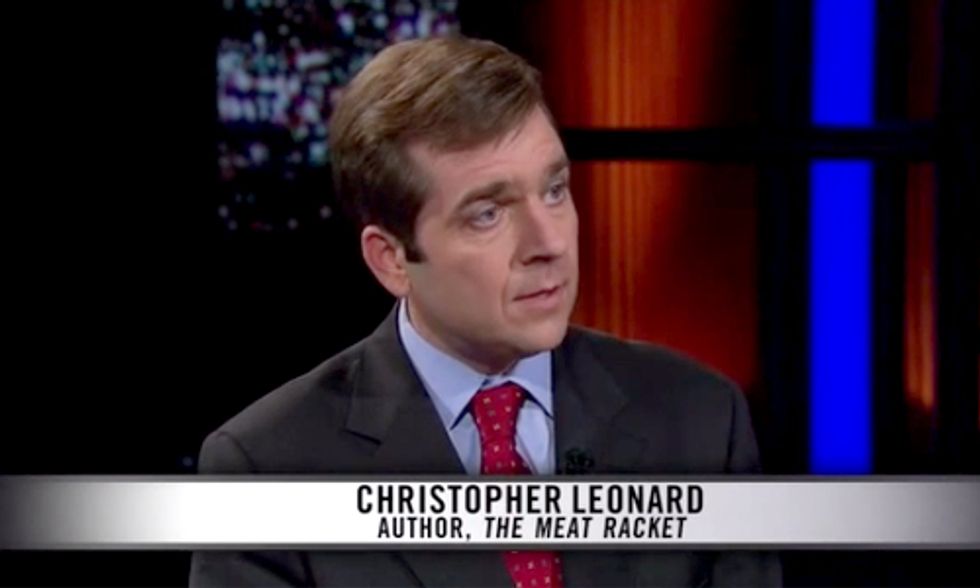 During his years reporting on the meat industry and gathering information for his latest title, The Meat Racket: The Secret Takeover of America's Food Business, there were times when Chris Leonard couldn't believe he was actually in the U.S.

The book's inspiration began about a decade ago when he visited one of the many small towns in Arkansas that is home to a Tyson Foods facility. As he described it on the most recent airing of Real Time with Bill Maher, the environment around Tyson's large mechanized poultry plant played out like a "feudal system," with farmers lacking the comfort to speak openly about Tyson even in the comfort of their own homes.

"It really struck me and it made me want to figure out how the system really operates and how we came to the point where we are today," Leonard told Maher and the HBO studio audience.

Less than two years ago, consumer watchdog group SumOfUs.org and The Humane Society of the United States galvanized 250,000 to demand that Tyson develop plans end the gestation-crate confinement of pigs within its supply chain. In 2008,  the U.S. Department of Agriculture caught Tyson injecting antibiotics directly into the eggs of future laying hens, despite advertising that used no antibiotics.

In a compelling eight-minute interview, Leonard and Maher discuss the operational videotape bans that Tyson has enforced, the lobbying practices and political power of large meat companies and why, collectively, those companies are now more powerful than they were when President Barack Obama promised to reshape the industry nearly six years ago.