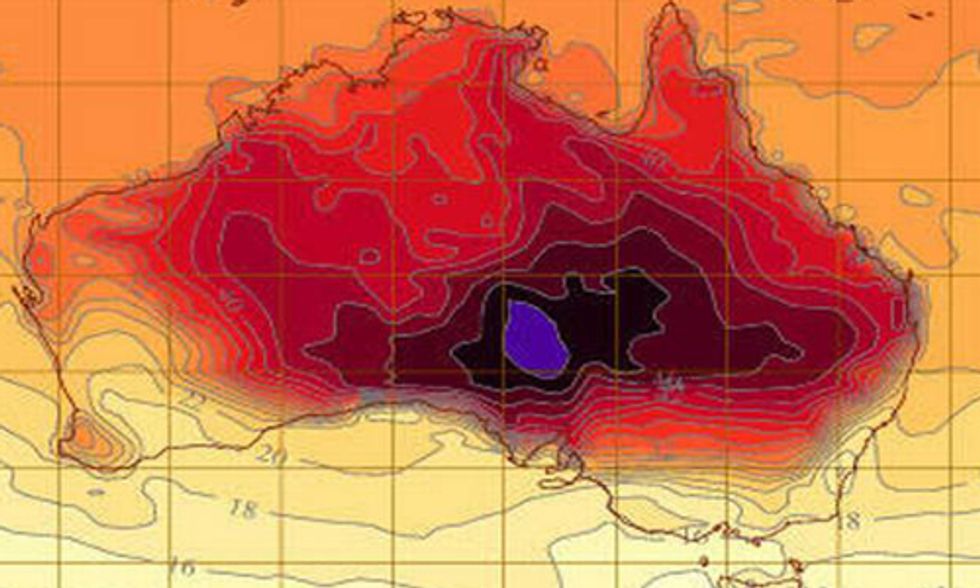 It’s official—Australia’s Bureau of Meteorology says 2013 ranked as the country’s warmest year since records began more than a century ago, with the annual national mean temperature 1.2 degree Celsius above the average.

Along the way, several new temperature records were set: the summer was the warmest on record as was Australia’s spring, while winter was ranked third in the historical warming stakes.

“The past year was characterized by persistent and widespread warmth,” says the Bureau.“Mean temperatures across Australia have generally been well above average since September 2012. Long periods of warmer than average days have been common, with a distinct lack of cold weather.”

Jan. 7, 2013 ranks as the hottest single day on record across the country, when the national daily average maximum temperature reached 40.3 degrees Celsuis.

Later that month Sydney—usually relatively cool compared with inland areas and cities such as Darwin in the Northern Territory—smashed its own temperature record with the mercury climbing to 45.8 degrees Celsius. Meanwhile Aug. 31 was the warmest winter day on record across the country.

The impact of the warming weather has been clear: though rainfall was above average in some areas and below in others, high temperatures meant devastating bush fires caught hold in many regions over the past 12 months. There were also cyclones and fierce floods with lives lost, homes destroyed and many millions of dollars of damage caused.

The Bureau of Meteorology says that overall Australia’s temperatures have gone up by one degree Celsius over the last century, with the majority of warming occurring since 1950. It says Australia has experienced just one cooler than average year—2011—over the last decade: the 10-year mean temperature for 2004-2013 was 0.5 degrees above average.

The Bureau says sea temperatures have shown a similar increase, with sea surface temperatures in waters around Australia being half a degree Celsius above normal in 2013.

What puzzles scientists is that last year’s warming came when the El Niño weather pattern over the Pacific, usually deemed responsible for heating up eastern areas of Australia in particular, was in a neutral or inactive phase.

Australia is considered by climatologists as being particularly susceptible to global warming. But while the country heats up, many politicians in the conservative coalition-led government elected to power in Sept. 2013 are intent on rolling back measures aimed at tackling climate change.

Tony Abbott, the newly installed prime minister, has insisted he’ll scrap a Clean Energy Bill—dubbed a carbon tax by its critics—which requires polluters such as energy companies to pay for their emissions of greenhouse gases.

The new government is also encouraging a number of massive coal and other mining projects and repealing taxes on mining company profits. Maurice Newman, a climate change sceptic who has accused the Intergovernmental Panel on Climate Change (IPCC) of “dishonesty and deceit”, has been appointed as chairman of the prime minister’s new Business Advisory Council.

Australia, described by some as “Asia’s quarry” for its mineral export trade, has carbon dioxide emissions of 18.4 tons per capita—a figure higher than in the U.S. and almost three times that in the UK.

At the most recent international climate conference in Warsaw, Poland, in Nov. 2013, Australia was accused by a large number of non-governmental organizations and others of not taking the UN’s climate process seriously.

However Australia’s own meteorologists would seem to have no doubts about the IPCC’s work.

“As summarized in the recent IPCC Fifth Assessment Report, recent warming trends have been dominated by the influence of increasing greenhouse gases and the enhanced greenhouse effect,” says the Bureau of Meteorology.