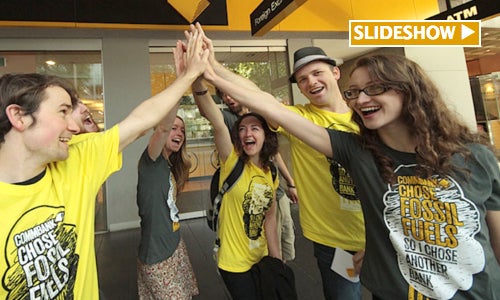 Today and tomorrow hundreds of customers with Australia’s Big Four Banks will close their accounts in a statement against the banks’ investments in new coal and gas projects. These customers will be taking part in Australia’s first “National Days of Divestment Action” organized by Market Forces and 350.org Australia.

Below, a slideshow of the first day of Divestment highlights conscious residents who are taking a stand:

Since May of last year, hundreds of customers have “put their bank on notice” and pledged to move more than $100 million AUD out of the Big Four banks unless they commit to ruling out future loans to coal and gas projects.

This is the first time that customers of Australia’s largest banks have been mobilized for a divestment action of this scale. Since 2008, Westpac, ANZ, NAB and the Commonwealth Bank have loaned a collective $19 billion AUD to new coal and gas projects, including the controversial Abbot Point coal terminal and the Maules Creek coal mine.

“The rapid expansion of coal and gas in our country at the expense of communities, other industries and the environment is cause for concern for a great many Australians,” said Julien Vincent, lead campaigner for Market Forces. “By moving their money to banks which do not fund fossil fuel projects, individuals are making a statement that it is not socially acceptable to profit from the destruction of our planet.”

The key objective of the “National Days of Divestment Action” is to cause a social stigma around fossil fuel investments in a similar manner to the boycotts against the South African apartheid regime and the tobacco industry.

This is the latest phase in the rapidly growing fossil fuel divestment movement, which has won support from high profile individuals such as  Archbishop Desmond Tutu, World Bank President Dr Jim Yong Kim and Head of the UNFCCC Christiana Figueres.

“Banks worldwide are fueling the climate crisis with investments in fossil fuels that also expose them to a huge financial risk,” said Tim Ratcliffe, 350.org European divestment coordinator. “The global divestment movement is challenging this gamble with our money and our future.”

“To prevent climate catastrophe, 80 percent of the known fossil fuel reserves need to remain underground. The days where it was acceptable to invest in fossil fuels are over. There is a groundswell movement building up and the banks need to start listening,” Ratcliffe added.

Fossil fuel companies are currently grossly overvalued. The vast majority of their carbon reserves is unlikely to be exploited, which will turn them into stranded assets. For example, a report commissioned by the Greens/European Free Alliance Group of the European Parliament assessed the risk the exposure to high-carbon assets poses to Europe’s top 43 banks and pension funds. It concluded that more than €1 trillion in European financial institutions is at risk from the growing carbon bubble.

According to a study conducted by Oxford University, the fossil fuel divestment movement is the fastest growing divestment movement in history. It has already seen numerous institutions committing to divest and is making an impact in the financial community, as well. The Norwegian Sovereign Wealth Fund, the world’s largest investment fund, recently announced an investigation into whether it should divest entirely from fossil fuels. Similarly, just this week, the world’s largest fund manager BlackRock teamed up with London’s FTSE Group to create a new set of indices excluding fossil fuel companies.

Last month’s report by the Intergovernmental Panel on Climate Change also recommended that $30 billion be moved out of fossil fuels each year to keep warming below the two degree threshold that international governments have committed to.

“Companies are becoming increasingly sensitive to the financial and reputational risks associated with investing in fossil fuels,” said Blair Palese, CEO of 350.org Australia. “At the end of the day, no company wants their logo displayed on a weapon of mass destruction.”