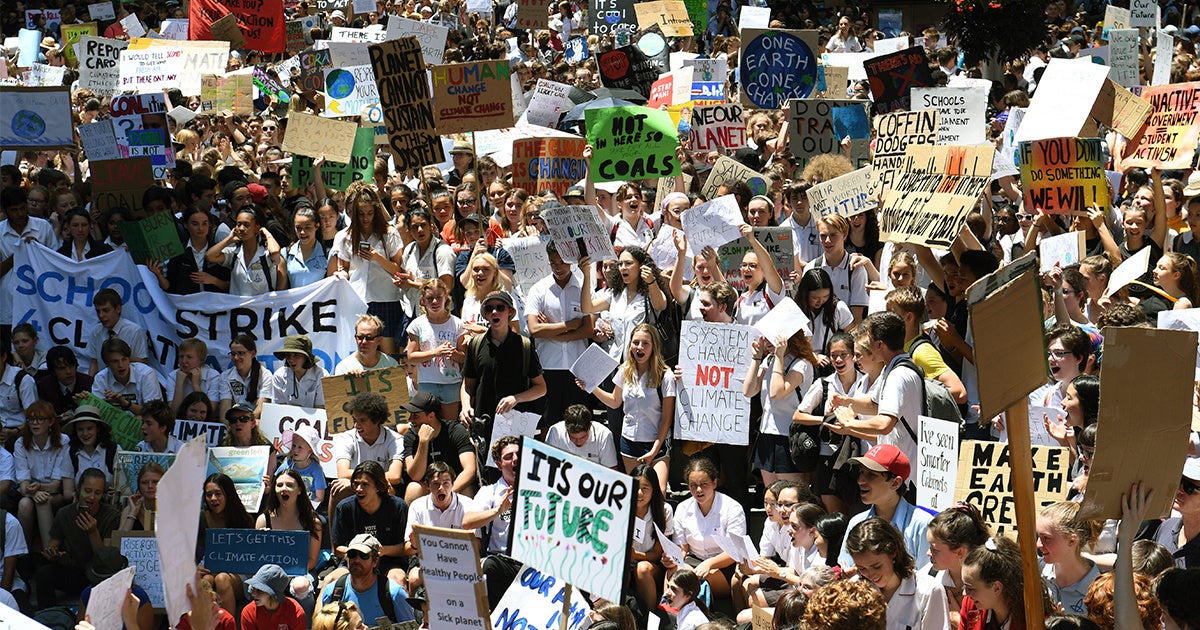 Thousands of Australian students defied their country’s Prime Minister Friday when they walked out of school to protest insufficient government action on climate change.

“Each day I send my kids to school and I know other members’ kids should also go to school but we do not support our schools being turned into parliaments,” Morrison said, The Guardian reported. “What we want is more learning in schools and less activism in schools.”

But the students showed Morrison exactly what they thought of his opinion, both by gathering in Australia’s capital cities and 20 regional centers en masse on Friday, as The Guardian further reported, and by responding directly in some of their signs.

“Why should we go to school if you won’t listen to the educated?” one sign shared by Environment Victoria on Twitter read.

"What is the point of learning facts when the most important facts given by the finest scientists are ignored by our politicians" – 15 year old Swedish student @GretaThunberg #climatestrike #Auspol @ScottMorrisonMP @Melissa4Durack pic.twitter.com/ZD34fgasrJ

“Numbers through the website since Monday have almost doubled,” one campaigner said. “Sign-ups have grown significantly. We have had a flood of media.”

Trent, a parent of an eight-year-old protester interviewed by Australia’s ABC, said the students’ education was actually driving their activism.

“I heard students today at the rally talking about the IPCC report, talking about the 700 odd days until emissions can peak before we exceed 1.5 degrees,” he said. “These are kids that actually understand the science in a way that I think most of parliamentarians don’t.”

The students want the government to stop investing in fossil fuel projects like the controversial Adani coal mine and move towards 100 percent renewable energy.

Hey @AdaniAustralia can you hear us? That's 10,000 young people telling you we don't want you stuffing up our future with your polluting coal mine. We will fight #4ourfuture and #StopAdani! #climatestrike pic.twitter.com/yd55z7Kkni

The Australian government, however, has said it will continue to exploit its coal reserves even after the most recent Intergovernmental Panel on Climate Change (IPCC) report called on world leaders to phase out coal by 2050 in order to keep warming to only 1.5 degrees Celsius above pre-industrial levels.

Morrison has said Australia will meet its pledge under the Paris agreement to lower greenhouse gas emissions to 28 percent of 2005 levels by 2030, but the most recent IPCC report found global emissions must actually fall to 45 percent of 2010 levels by that date. The most recent UN Emissions Gap Report found that Australia had made no improvements to its climate policy since last year, BBC News reported.

Time for bed in Sweden. But in Australia it’s already morning and the 30th of November. IStand strong Australia. We are with you. #FridaysForFuture #ClimateStrike #schoolstrike4climate #walkout

The Australian movement was spearheaded by two 14-year-olds in the state of Victoria, Milou Albrect and Harriet O’Shea Carre.

“The climate change emergency is something we have been thinking about for a long time,” O’Shea Carre told BBC News. “We wrote letters and did different things but they never seemed to make a difference. Really, education, is our only power. By sacrificing that [on Friday], it’s making a big point.”