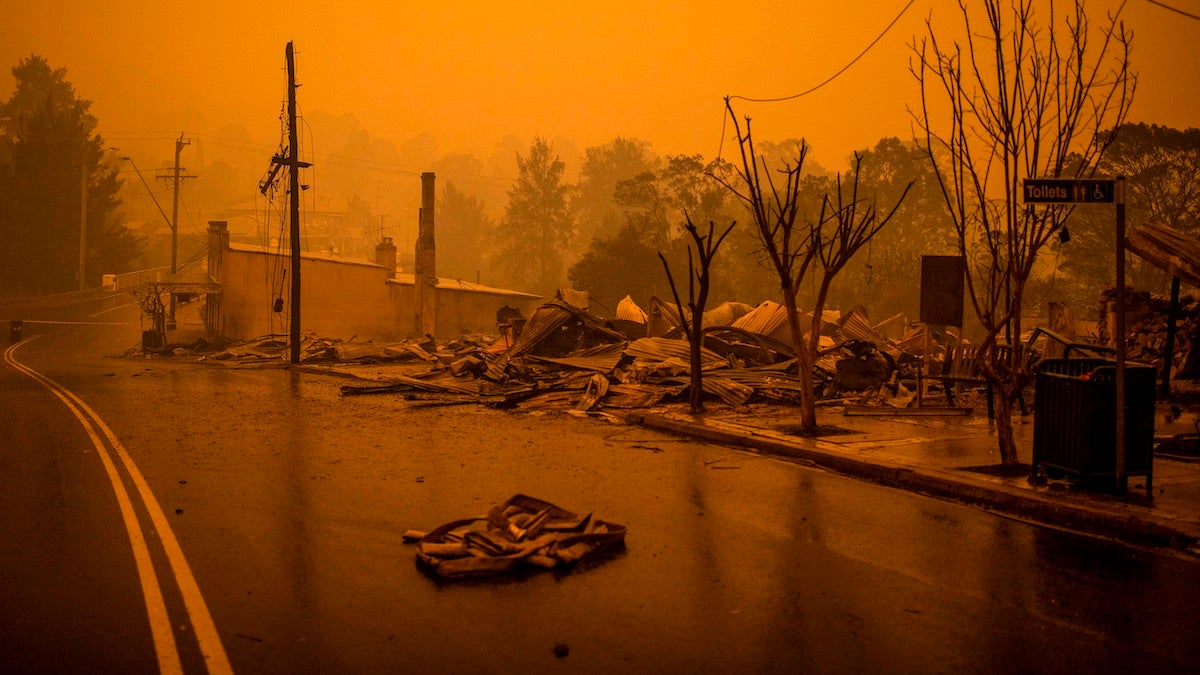 The remains of burnt out buildings are seen along Main Street in the New South Wales town of Cobargo on Dec. 31, 2019, after bushfires ravaged the town. Thousands of holidaymakers and locals were forced to flee to beaches in fire-ravaged southeast Australia. SEAN DAVEY / AFP via Getty Images

An out-of-control wildfire in the Australian state of Victoria forced thousands of people to flee towards the coast Tuesday.

Residents of the town of Mallacoota hunkered down in their homes or headed for the relative safety of the beach when a siren sounded around 8 a.m., BBC News reported. Victoria’s state emergency commissioner Andrew Crisp said 4,000 sheltered by the water.

“It’s mayhem out there, it’s armageddon,” evacuee Charles Livingstone told The Guardian Australia. He said he had evacuated to the town’s jetty Monday night with his wife and 18-month-old baby, but moved to the community center to escape the smoke.

Incredible – and frightening – photos are emerging from Mallacoota, a small town in the East Gippsland region of Victoria, where about 4000 people are sheltering near water, protected by CFA tankers. Visit @theage's live blog for updates: https://t.co/VAPFn2Yc20 #vicfires pic.twitter.com/BV8JZqmvBU

The fire that prompted the flight to the coast sparked Sunday in Wingan, according to The Guardian, but CNN reported that there were more than 10 fires burning Monday in the East Gippsland area where Mallacoota is located. Three of those fires have been burning for more than a month, and several new blazes were started Sunday by dry lightning and then spread because of hot, dry, windy weather.

Mallacoota was not evacuated along with the rest of East Gippsland Sunday, and by Monday it was too dangerous for anyone to move, The Guardian explained.

Instead, residents fled to the water’s edge, and the fire followed them around 1:30 p.m.

10:30am update from Dad at the wharf in Mallacoota – “fire front not far away” #Mallacoota #bushfirecrisis pic.twitter.com/MvgeiZqujM

“It should have been daylight but it was black like midnight and we could hear the fire roaring,” local business owner David Jeffrey told BBC News. “We were all terrified for our lives.”

He said residents planned to jump off a sea wall into the water if the flames came too close.

Luckily, a change in the wind redirected the fire away from the town.

“I understand there was a public cheer down at the jetty when that was announced,” chief fire service officer Steve Warrington told BBC News.

However, residents will now have to deal with fire damage. Warrington told CNN that “a number of houses” were destroyed or damaged. Mallacoota residents estimated on social media that around 20 homes, the school, golf club and bowling club had been burned, according to The Guardian.

“I just don’t know how we’re going to pull through this, really,” Maisy Roberts, who works at the town’s Croajingolong Cafe and thought her home was destroyed, told 3AW’s Nick McCallum. “It’s just absolute devastation.”

Mallacoota resident Maisy says she doesn't know how the community will recover from the fires.

Thousands are still sheltering at the beach in the popular tourist town.

Mallacoota is not the only place in Australia feeling the heat from a devastating fire season. Four people are missing in East Gippsland as a whole, 3AW reported. Initial aerial investigations show that 19 structures have been destroyed in Sarsfield and 24 in Buchanan, but authorities think the final tally for the region will be higher.

There are fires burning in every Australian state, CNN reported, though Victoria and New South Wales (NSW) have been the hardest hit. More than 900 homes have been destroyed in NSW alone.

Twelve people have died in the blazes so far, BBC News reported. On Tuesday, bodies believed to belong to a father and son were discovered in Corbargo, NSW.

Three of the dead were firefighters. Two, both fathers to young children, died in NSW a little less than two weeks ago. A third, 28-year-old Samuel McPaul, died Sunday when fire-created winds lifted his truck and flipped it over. He was newly married and expecting a child.

The fires have been linked to the climate crisis.

“Climate change is influencing the frequency and severity of dangerous bushfire conditions in Australia and other regions of the world,” Australia’s Bureau of Meteorology said, according to TIME.