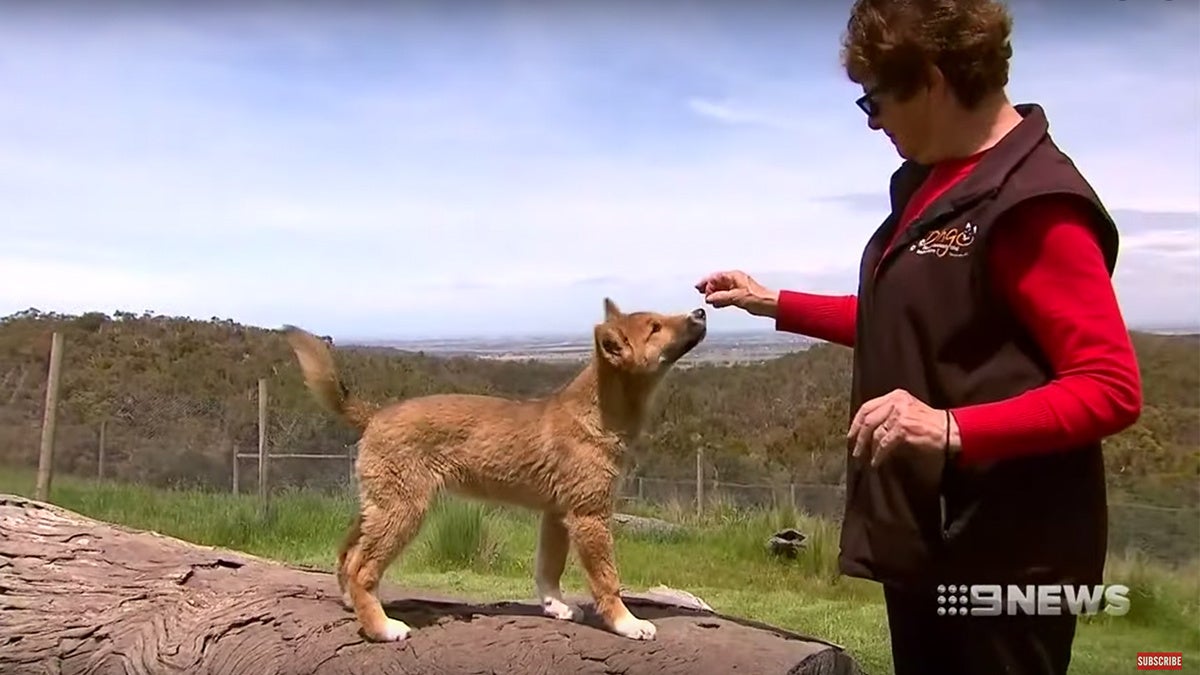 A stray puppy discovered in an Australian backyard has been revealed to be pure dingo. Nine News Australia / YouTube screenshot

A stray puppy that was found “whimpering” in an Australian garden is actually an endangered type of dingo, The Washington Post reported Monday.

DNA testing revealed that the puppy, named Wandi, had two unique features, he was 100 percent dingo, and he was an Australian alpine dingo — the most threatened type.

“This type, the alpine dingo, unfortunately shares the eastern seaboard areas … where 80 percent of the Australian population lives,” Watson told ABC. “So not only is the habitat of the alpine dingo dwindling to nothing, but our persecution of this animal — because it sadly looks like a dog — has pushed this beautiful alpine dingo very close to extinction.”

Dingoes are also threatened by interbreeding with domestic dogs, according to the Australia & Pacific Science Foundation. The foundation explained why that’s a problem:

The introduction of dog genes into the dingo population threatens to change/eradicate the unique characteristics of the Australian dingo. The uniqueness of the dingo and its importance to the Aboriginal people and Australian ecological systems make saving this species an important and urgent task. Features that distinguish the dingo from the domestic dog include its inability to bark. Instead, dingoes vocalise by howling. Dingoes only have one breeding cycle per year (unlike dogs which have two) and their skull morphology differs from the domestic dog. Because of hybridization and eradication programs, Canis familiaris dingo is a subspecies in danger of losing its uniqueness. Unless measures are implemented now, the extinction of the pure dingo seems inevitable in less than 50 years.

In Eastern Australia, where Wandi was found, pure dingoes are especially rare.

“Nowhere on the east coast of Australia can you find a dingo population that isn’t at least fifty percent, and in some cases eighty percent, domestic dog,” Ricky Spencer, an associate professor of zoology at the University of Western Sydney, said in a 2011 Australian Geographic article reported by The Washington Post.

This could make Wandi an important part of the Australian Dingo Foundation’s breeding program.

“For us he is going to be a very valuable little thing,” Watson told ABC.

But no one knew Wandi’s conservation value when he was first discovered in a yard in the small town of Wandiligong in the state of Victoria in August.

“They went out in the morning and they could hear whimpering,” veterinarian Rebekah Day told CNN.

The family that found Wandi first left him alone, thinking he was a lost puppy. But when no one came for him, they brought him to Day’s Alpine Animal Hospital in nearby Bright.

Day said she found marks on his back that suggested he was carried away from his original family by a bird of prey.

“The resident hadn’t heard any [other dingoes] calling. So he was just a lonely little soul sitting in a backyard,” she told ABC. “He was adorable, serious puppy cuteness.”

Wandi was eventually moved to Watson’s sanctuary while his caretakers waited for the results of genetic testing. He can now join the around 40 adult dingoes in the foundation’s breeding program.

“We’re just keeping the genetic lines going until the day that there’s going to be a safe place where they can be rewilded,” Watson told CNN.