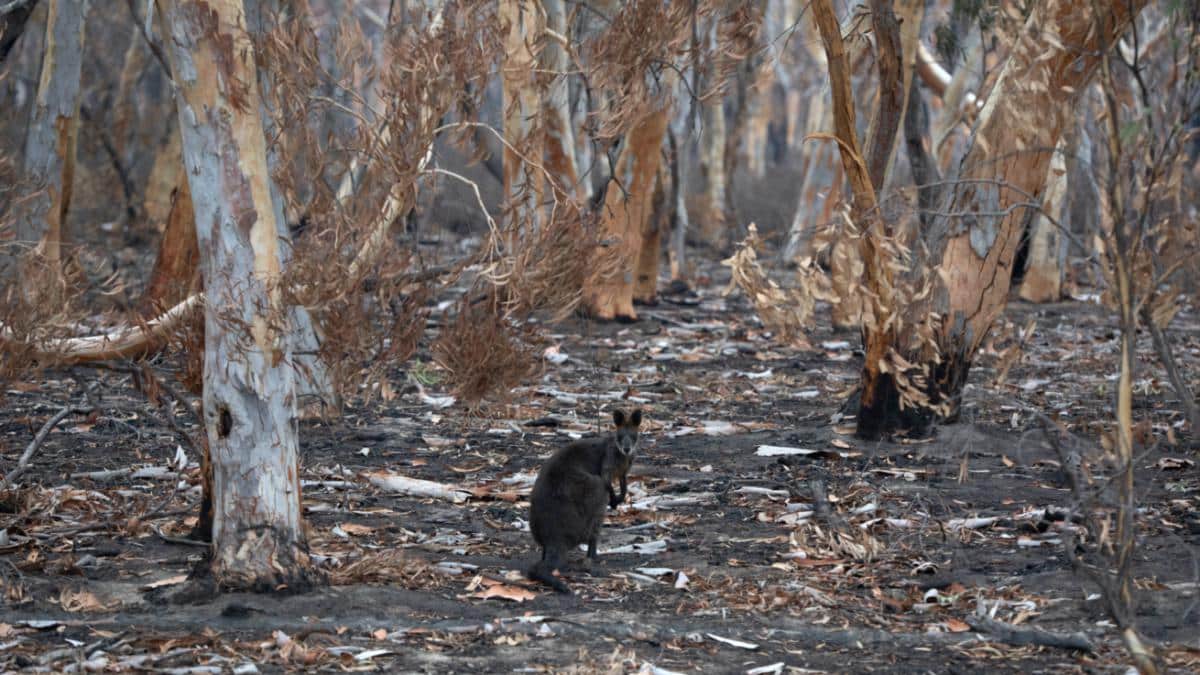 A surviving kangaroo is seen in the aftermath of Australia's devastating 2019-2020 wildfires. E4C / Getty Images

A new report about Australia’s wildlife loss following the 2019-2020 wildfires reveals a staggering number. The sobering findings, calculated by the World Wildlife Fund (WWF)-Australia, determined that 143 million native mammals were likely killed, including more than 61,000 koalas.

Ten scientists and researchers worked on the labor-intensive report, factoring in limitations for concluding total numbers. However, an estimated three billion animals were affected by the fires, including 2.46 billion reptiles.

In the report’s forward, WWF-Australia Chief Executive Dermot O’Gorman declared that the fires were “one of the worst wildlife disasters in modern history.”

Of the 143 million mammals, it’s estimated that the wildfires killed about one million wombats, five million kangaroos and wallabies, five million bats, 39 million possums and gliders and 50 million native mice and rats, The Guardian reported.

The loss of Australia’s endemic mammals is particularly stark since the country is the only place where they’re naturally found.

Also lost were about five-and-a-half million lesser-known but equally important Australian mammals such as bettongs (or rat kangaroos), bandicoots, quokkas and potoroos.

The koala toll has been especially difficult. O’Gorman wrote in the report, “That is a devastating number for a species that was already sliding towards extinction in eastern Australia. We cannot afford to lose koalas on our watch.”

Last month Australian Environment Minister Sussan Ley decried “a serious lack of data about where [koala] populations actually are,” and called for a national census of the marsupial.

In New South Wales, a parliamentary inquiry found that koalas would be extinct by 2050 without intervention to save their habitat.

Proposed solutions to increase koala numbers involve protecting koala corridors and banning logging in old-growth forests, but the severity of recent fires and the threat of future disasters due to climate change impede saving the species. However, a countrywide koala census is scheduled for next year.

Researchers intend to use koala droppings, drones and detector dogs to count the species. The last koala census in 2016 estimated there were more than 300,000 in Australia.

“It’s really a call to arms to try and do something because under climate change these fires will happen again,” University of Sydney Ecologist Chris Dickman, who worked on the project, told the Guardian.