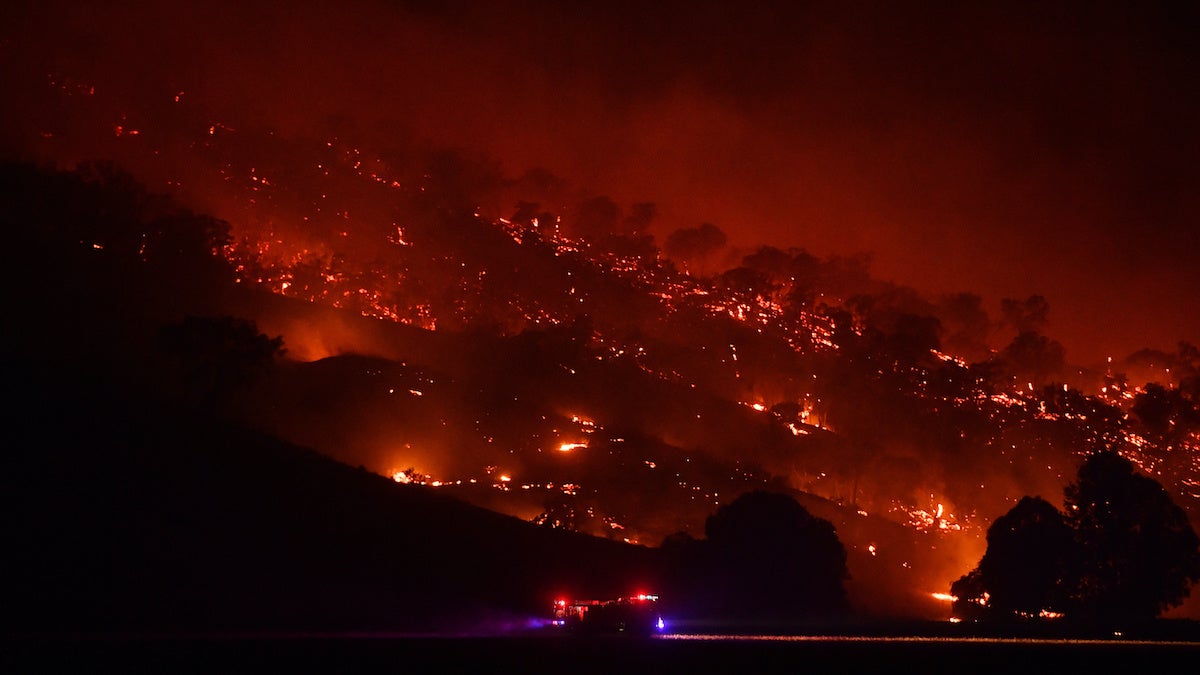 Rural FIre Service firefighters conduct property protection patrols at the Dunn Road fire on Jan. 10, 2020 in Mount Adrah, Australia as about 135 fires burned in NSW, 50 of which were uncontained. Sam Mooy / Getty Images

After weeks of inaction and ineptitude as his country burns, as a billion animals die, with entire species potentially wiped out, and with dozens of people dead and communities and lives ripped apart, Australian Prime Minister Scott Morrison has finally slumbered into action.

Over the weekend, Morrison tweeted, “We’re putting more Defense Force boots on the ground, more planes in the sky, more ships to sea, and more trucks to roll in to support the bushfire fighting effort and recovery as part of our co-ordinated response to these terrible #bushfires.”

Morrison also issued what has been described as a “misleading and deceptive” advertisement, praising his government’s response to what critics have labeled a national and international emergency, likening it to climate suicide and the apocalypse.

But Morrison’s actions continue to be extensively criticized, no matter what he says or does. The ad was widely condemned, with one commentator from Griffith University, professor AJ Brown, saying it raises “serious integrity issues” and was misleading.

Former Prime Minister Kevin Rudd also launched a scathing attack on Morrison. In an op-ed in The Guardian, he wrote, “The uncomfortable truth is the government’s response just doesn’t pass the pub test. It’s been evasive, tepid, tone-deaf and, above all, too late.”

Jennifer Mills, the author of “Dyschronia” and a volunteer firefighter in rural South Australia, writing in The Washington Post has also weighed in on Morrison: “Like many volunteer firefighters, I am furious. Six months before the fires, and then again in September, Morrison declined to meet with a group of former fire chiefs who wanted to warn him that an emergency like this was on the horizon.”

She continued: “Volunteer firefighters like me watched this season approach – the deadly combination of intense heat and Australia’s worst drought in decades – with dread. Where were the extra resources we needed? And why was Australia still refusing to act on the climate emergency?”

She adds that beyond the immediate catastrophe, where 23 people have died, “The severe health impacts from this smoke-filled summer will be harder to quantify.”

Indeed, this is not a crisis that is going to abate anytime soon. As of today, there are still over 135 bushfires burning across NSW, including almost 70 which remain uncontained.

Although there has been a small reprieve in some areas with welcome light rain, experts are warning that the health impacts of breathing the toxic air from the fires will not be known for some considerable time.

University of NSW professor Bin Jalaludin, a chief investigator with the Center for Air Pollution, Energy and Health Policy Research, told the Sydney Morning Herald, “I’ve been working in air pollution research since the early 1990s and we’ve not had any fires so prolonged or so extreme.”

“For individual people,” added Jalaludin “the impacts could be low, but if there is pre-existing heart disease, high blood pressure and high cholesterol, air pollution might just tip you over into having a heart attack”.

One fundamental reason for Morrison’s inactivity is his well known and widely ridiculed climate denial and his government’s long-term support for fossil fuels, including the fact that his government is the largest exporter of coal. But now, Morrison has been belatedly trying to deny he is a climate denier.

Morrison has also finally and tardily announced an AUS billion National Bushfire Recovery Fund, which will be paid out over the next two years, promising to “meet every cost that needs to be met.”

While money to rebuild homes, businesses and communities is so urgently needed, why should traumatized and affected communities ultimately pay for the bail-out fund via indirect or direct taxes? Instead, Scott Morrison should finally stand up to the fossil fuel lobby and force them to pay for the damage caused by climate change.

Just before Christmas, a new plan was hatched to make companies producing fossil fuels foot the bill for the escalating costs of natural disasters in Australia.

The apocalyptic scenes witnessed in Australia are entirely consistent with what climate scientists have been warning about for decades. As one of them, Bill Hare tweeted yesterday:

Since then, for ten years Australian politicians have carried on denying the problem. For ten years, Big Oil and Big Coal have carried on drilling and mining as if they were immune from the consequences of their actions. They knew the risks, but ignored them. Now they must pay.

If they were forced to pay, they might start reacting to climate change in a way that is commensurate to the emergency we are in. And if they were now forced to pay, it would set a precedent for other governments to follow in the climate disasters that are surely to follow.

We have a new decade now. The old ways must end. We need a new direction and new political leadership. Morrison can salvage something from the wreckage of the fires and make the polluters pay for the mess that we are in.