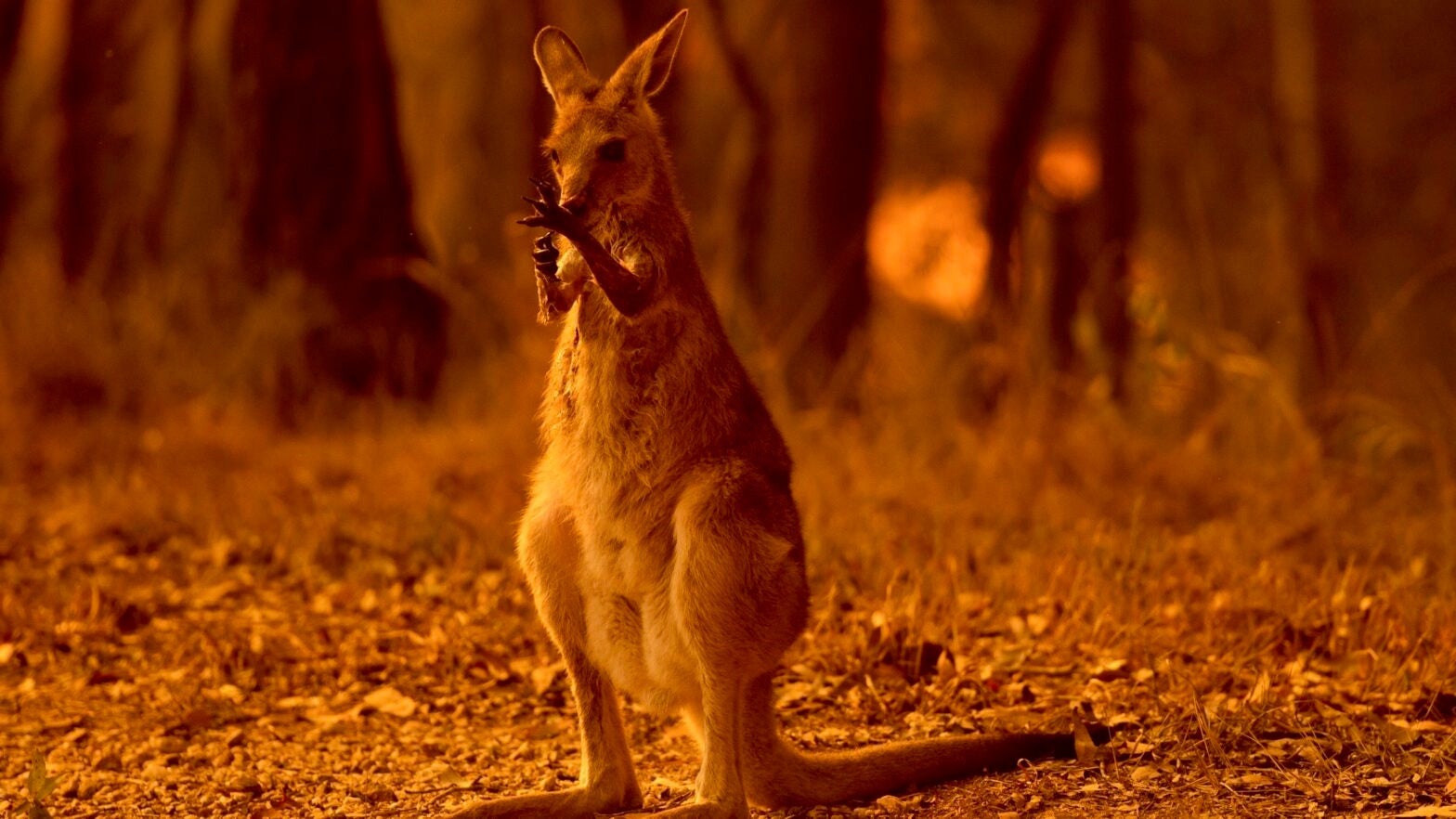 A wallaby licks its burnt paws after escaping a bushfire on the Liberation Trail near the township of Nana Glen on the Mid North Coast of NSW, Nov. 12, 2019. Wolter Peeters / The Sydney Morning Herald / Fairfax Media / Getty Images

Carrots to the rescue!

In an effort to help one of the many animal species threatened by Australia’s devastating wildfires, officials in New South Wales (NSW) are air-dropping more than 4,000 pounds of carrots and sweet potatoes into the fire-ravaged habitat of the brush-tailed rock-wallaby, an endangered species in the state.

“This is the most widespread food drop we have ever done for brush-tailed rock-wallabies,” NSW Minister of Energy and Environment Matt Kean said, according to CNN.

Kean called the airdrop “Operation Rock Wallaby” on Twitter and explained in a statement why it was so important:

“The provision of supplementary food is one of the key strategies we are deploying to promote the survival and recovery of endangered species like the Brush-tailed Rock-wallaby,” Mr Kean said.

“Initial fire assessments indicate the habitat of several important Brush-tailed Rock-wallaby populations was burnt in the recent bushfires. The wallabies typically survive the fire itself, but are then left stranded with limited natural food as the fire takes out the vegetation around their rocky habitat.

“The wallabies were already under stress from the ongoing drought, making survival challenging for the wallabies without assistance.”

Brush-tailed rock-wallabies are a kind of marsupial. They live in rocky habitats near the east coast of Australia and can climb trees and almost vertical rocks with their sharp claws and strong legs, according to the Australian Government Department of the Environment and Energy. Most of the 15 species of rock wallabies in Australia are considered threatened. The brush-tailed rock-wallaby is considered endangered in NSW and vulnerable by the International Union for Conservation of Nature (IUCN) Red List. The IUCN last assessed the species in 2014 and reported that there were around 20,000 in the wild, according to Global News.

Kean said that the government would also support the wallabies by managing predators and setting up cameras to see how many animals were present and whether they were eating the food.

“At this stage, we expect to continue providing supplementary food to rock-wallaby populations until sufficient natural food resources and water become available again in the landscape, during post-fire recovery,” Kean said.

Operation Rock Wallaby is one of many ways that Australian officials are working to help wildlife recover from the bushfires, which ecologists estimate have killed more than one billion animals. On Monday, the government promised 50 million Australian dollars (approximately .5 million) to an emergency wildlife recovery program, Reuters reported.

“This has been an ecological disaster, a disaster that is still unfolding,” Treasurer Josh Frydenberg told the press on Monday during a visit to the Port Macquarie Koala Hospital, as Reuters reported. “We know that our native flora and fauna have been very badly damaged.”

The fires may have destroyed 30 percent of koala habitat in NSW, and Federal Environment Minister Sussan Ley said that the conservation status of some koala populations might have to be raised from vulnerable to endangered.

The country’s most devastating fire season on record has burned since September, The Independent reported. The fires have killed 28 people and torched thousands of homes. Scientists agree that the climate crisis is making Australia’s fires worse, according to The Guardian.

“Human-caused climate change has resulted in more dangerous weather conditions for bushfires in recent decades for many regions of Australia,” Australia’s National Environmental Science Program wrote in November 2019. “Observations show a trend towards more dangerous conditions during summer and an earlier start to the fire season, particularly in parts of southern and eastern Australia. These trends are very likely to increase into the future, with climate models showing more dangerous weather conditions for bushfires throughout Australia due to increasing greenhouse gas emissions.”