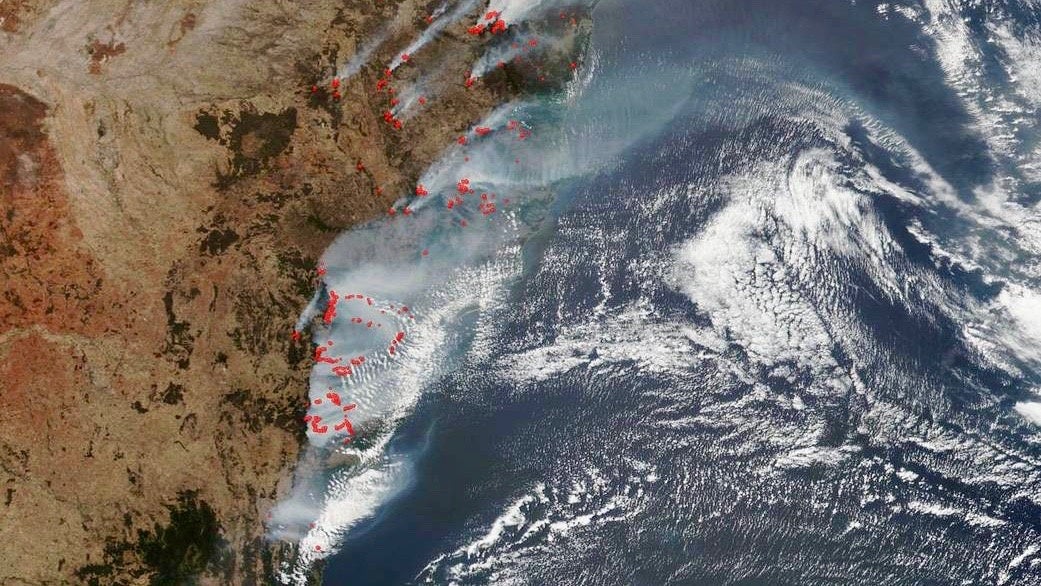 The bushfires that have been tearing through New South Wales and Queensland, decimating koala habitats, taxing the water supply, and choking the air since August have claimed six lives. Now, new NASA data shows that the fires have emitted 250 million tons of carbon dioxide, the equivalent of half thee country’s annual greenhouse gas emissions, according to The Guardian. In 2018, Australia’s total greenhouse has emissions was 532 million tons of carbon dioxide.

Dr. Niels Andela, a scientist at the NASA’s Goddard Space Flight Center and a collaborator in the Global Fire Emissions Database, gave the data to The Guardian Australia.

Usually, bushfires are considered carbon neutral, because when vegetation regrows it absorbs the carbon dioxide the fires have emitted. However, scientists are predicting that the scale of this year’s fires coupled with drought-stricken forests will make it impossible for the vegetation to absorb the carbon, as The Guardian reported.

“Drought-stressed trees recover less well – carbohydrates reserves are exhausted – and under climate change tree growth may be slow and fires more frequent, meaning less tree biomass and even loss of forest cover,” said David Bowman, a fire ecologist at the University of Tasmania, to the Guardian. “This is a nasty negative feedback cycle of a biosphere carbon sink becoming a source [of carbon].”

Pep Canadell, a senior research scientist at the CSIRO Climate Science Centre, told the Australia Broadcasting Corporation (ABC) Australia’s forests had more in common with the Amazon than people would think.

“We’re talking about very different sizes, of course. [There] are more carbon-dense forests in Amazonia than in Australia,” said Canadell. “Having said that, a lot of [bush areas] burning now in NSW are actually exceptionally carbon-dense — they’re very tall and quite dense forests. So from a per square meter or hectare level, we’re certainly not shy away from what is happening in the Amazon.”

The bushfires have already burned over 6.7 million acres of land and they could last through the Australian summer, until March or longer, as Gizmodo reported.

The fires follow the pattern of the Amazon fires and the California fires that create a carbon feedback loop, where human activity compromises Earth’s ability to absorb carbon as we emit more of it, according to Gizmodo. These events are becoming more common as the Earth warms. It’s especially evident in melting permafrost, which releases a tremendous amount of trapped carbon as it thaws, as the National Oceanic and Atmospheric Administration’s Arctic Report Card found.

“This pulse of fire emissions should indeed be of concern. Any additional carbon emissions to the atmosphere, with no guarantee that it will be removed back by regrowing vegetation in a later stage, is of concern, particularly in an Australia under climate change,” said Canadell, as The Guardian reported. He added, “Thus, it is important to understand both risks – the emissions from fires but also the potential long-term loss of CO2 sink capacity of the terrestrial vegetation due to the incomplete recovery of burned landscapes due to permanent degradation. These emissions are very significant.”

“The nightmare scenario is that because of climate change, the forest isn’t able to recover itself,” said Bowman to ABC. “Once we actually know for certain what’s happening, it’s going to be too late. And this is a big thing to be wrong about.”