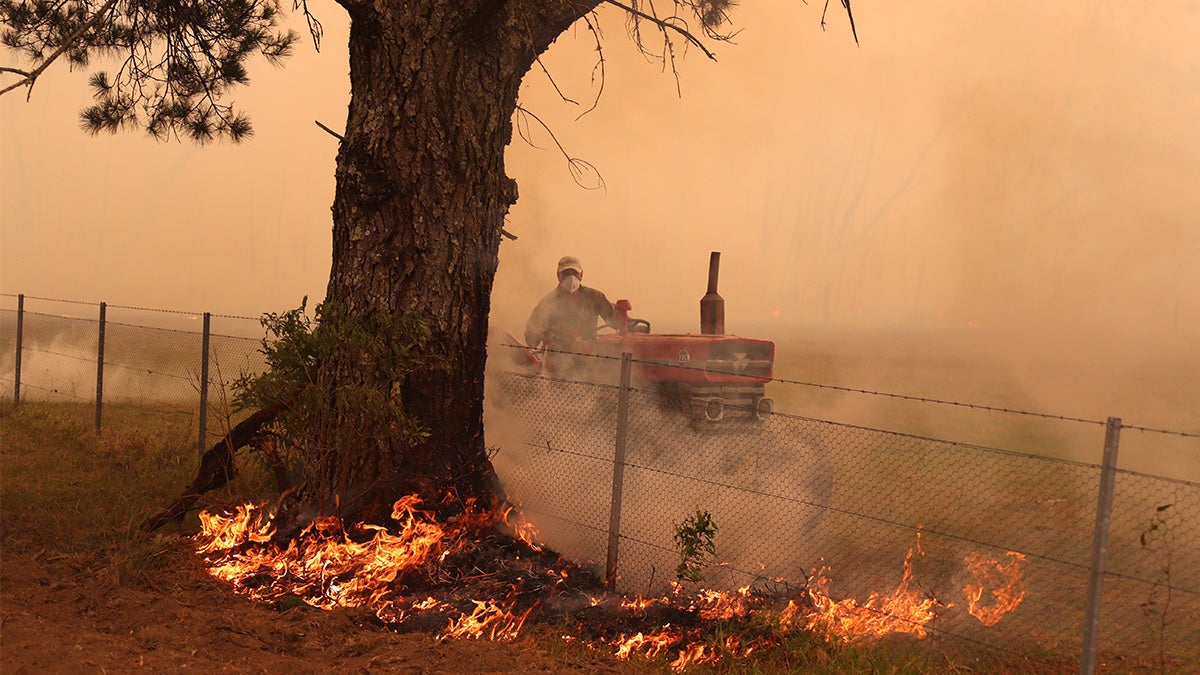 A farmer drives a tractor as he uses a hose to put out a fire burning in his paddock and near homes on the outskirts of the town of Bilpin on Dec. 19, 2019 in Sydney, Australia. David Gray / Getty Images

Two firefighters died Thursday battling wildfires fueled by a record-breaking heat wave in Australia, prompting Prime Minister Scott Morrison to return home from a Hawaiian vacation he had been much criticized for taking.

The firefighters were 32-year-old Geoffrey Keaton and 36-year-old Andrew O’Dwyer, and both of them had young children, The New York Times reported. They had been battling blazes southwest of Sydney when their truck struck a tree and rolled off the road, the New South Wales Rural Fire Service (NSW RFS) said in a statement. Three other firefighters traveling in the truck were also injured.

“Our hearts are breaking,” NSW RFS association president Brian McDonough said in a statement reported by The New York Times.

The two men were the first firefighters to die during this Australian spring’s historic fire season, according to The New York Times, but their deaths bring the total fire death toll in New South Wales up to eight since October, Reuters reported. Ten firefighters were also seriously injured Thursday.

The news prompted Morrison to announce he would return from a family vacation in Hawaii.

Morrison’s absence sparked protests outside his residence in Sydney Thursday. One protester carried a sign reading, “ScoMo, where the bloody hell are you?” borrowing a slogan from a popular Tourism Australia ad campaign. #wherethebloodyhellareya also trended on Twitter, according to The New York Times.

Morrison announced he would return soon after the firefighters’ deaths were made public.

“Over the course of the past week I have been taking leave with my family. Our leave was brought forward due to the need to cancel our scheduled leave in January because of our official government visit to India and Japan at the invitation of PMs Modi and Abe,” Morrison said in a statement reported by The New Daily. “I deeply regret any offence caused to any of the many Australians affected by the terrible bushfires by my taking leave with family at this time.”

But it isn’t just Morrison’s absence that has some Australians upset. It’s also his lack of action on the climate crisis that makes extreme temperatures and fire seasons more likely.

“We’re not offended. We’re terrified and we’re furious,” Greenpeace Australia Pacific wrote in a Facebook post responding to Morrison’s return. “The country is on fire, the sky is poison, it’s the hottest day we’ve ever recorded and you’re failing us. This is climate change. Do something about it.”

Australia is one of the top greenhouse gas emitters per capita because of its reliance on coal, and the government approved a new coal mine in the state of Queensland in June that will be built by Adani Enterprises, Reuters reported.

Fires have been burning in Australia for months and have consumed more than 700 homes and millions of hectares since September, BBC News reported.

“It is frightening and a little frustrating, but this is what climate scientists have been saying for decades,” University of New South Wales climate scientist Dr. Sarah Perkins-Kirkpatrick told The Guardian of the extreme heat. “I’m bordering on saying ‘I told you so’ but I don’t think anyone really wants to hear that.”

New South Wales is the state most impacted by the fires, according to BBC News, and a state of emergency has been declared there as around 100 blazes burn. Fires also ignited in Victoria and South Australia Friday when temperatures reached higher than 47 degrees Celsius in some places. In South Australia, asphalt on roads even began to melt, The New York Times reported.

Also on Friday, smoke from the New South Wales fires reached Melbourne in Victoria for the first time, according to BBC News.

Smoke is extending over #Victoria this morning from the #nswfires and the Gippsland fires, reducing visibility to around 1km in places. The smoke will gradually disperse over the next few hours, although generally hazy conditions are expected right across Victoria today. pic.twitter.com/T8AdM2RoHv

“It’s come a very long way to get here,” a Bureau of Meteorology spokesman told The Australian of the smoke.