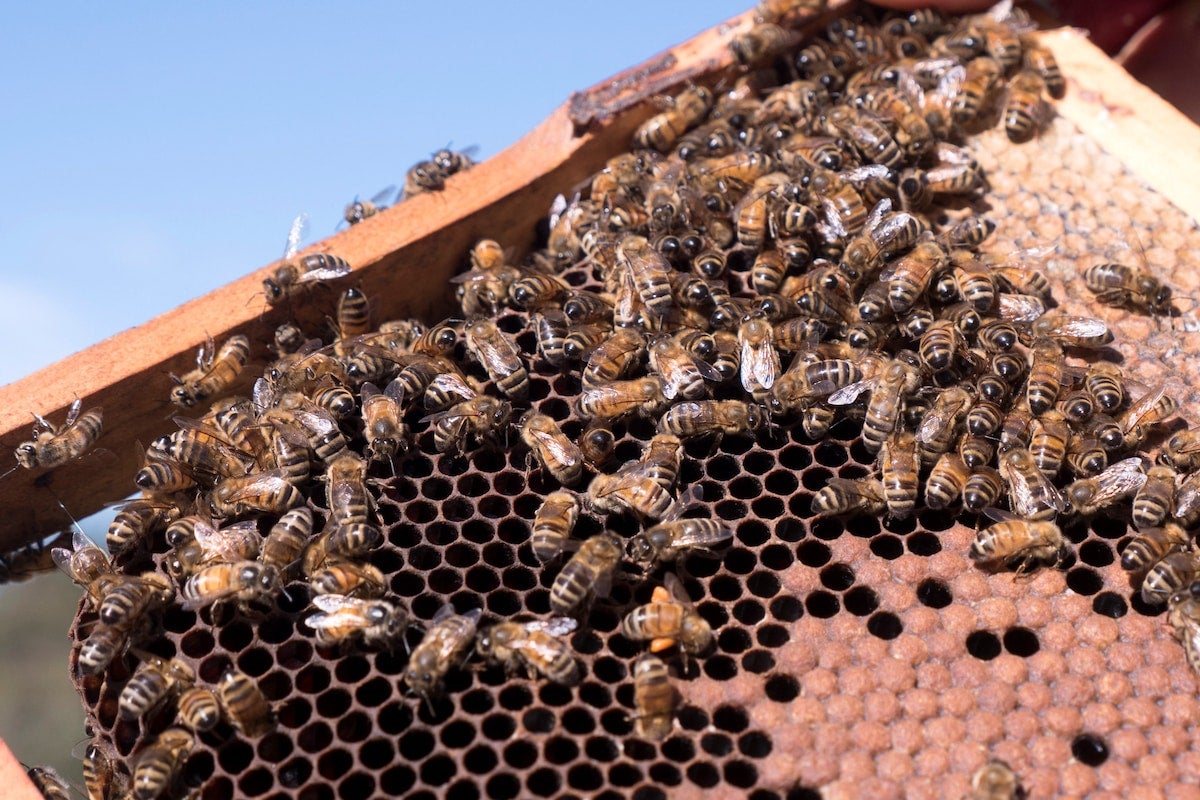 Bees on a honeycomb at an apiary in New South Wales, Australia in April of 2021. GREGORY PLESSE / AFP via Getty Images

In New South Wales, Australia, an outbreak of varroa mite parasites, also called varroa destructors which are deadly to honey bees, has led to the culling of over 15 million bees since the parasite was first detected on June 22.

New South Wales’ Agriculture Minister Dugald Saunders said that bees in 1,533 hives have been euthanized. The bees were located from the central to the mid-north coasts and in Narrabri in the northwest. With each hive containing between 10,000 and 30,000 individual bees, an estimated 15 million to 45 million bees have been killed in order to control the parasites.

“[Bees] do breed up again very quickly but it’s about making sure you’ve got all of the people still wanting to stay in the industry after it’s been decimated like this,” Saunders said, as reported by The Guardian.

In addition to euthanizing bees, the government has also restricted movement of bees to prevent the parasite from spreading, but beekeepers are concerned about being able to move the bees again in time for almond pollination, which begins in August.

“It’s about making sure that we’re not risking moving a devastating disease into an area that it isn’t [devastating] currently,” Saunders said. “If we can have a good way of identifying where hives might come from to be part of the pollination, and if everyone feels safe around how that can work, then fantastic.”

Beekeepers will be compensated for bees, hives and additional equipment destroyed during the eradication process, but the government has not agreed to cover lost income for beekeepers impacted by the culling.

And culling efforts may not work. Sasha Mikheyev, professor at the Australian National University (ANU), told Phys.org that no other country has eradicated the mites, and the risk of the parasite spreading in Australia is still high. Mikheyev explained that similar outbreaks in other countries led to changes in beekeeping, including more chemical controls and higher pollination costs.

“What makes eradication so difficult is that we have a very large population of feral western honey bees that live in the bush and are very hard to locate, so even if mite infected hives can be detected and destroyed, it is much harder to do the same with feral colonies,” Mikheyev said.

Varroa mites are small, external parasites that primarily feed on honey bee larvae and pupae but can also live on adult honey bees. An infestation may take a few years to grow, and the mites can make it harder for honey bees to return to their hives after foraging. Ultimately, an infestation leads to the collapse and death of a honey bee colony.

Saunders remains optimistic in the fight against the parasites. Officials from New Zealand, which experienced an infestation in the early 2000s, are heading to Australia this week to share advice on battling these mites.

“Everything we are doing is still working,” Saunders said. “We’re finding more infected premises, as was expected. They are all linked, which is the good news part of it. We haven’t seen an unexpected outbreak somewhere. We’ve just seen everything connected to a previous case, and that’s important.”

IUCN Officially Lists Beloved Monarch Butterflies as Endangered
Migratory monarch butterflies (Danaus plexippus plexippus) are now considered endangered
By Paige Bennett
1,000+ Hectares of Koala Habitat Would Be Cleared for Proposed Mine in Queensland
A new mine proposed for Queensland, Australia would require 1,023.6
By Paige Bennett
Lifeguard Tower Removed After Sydney-Area Beaches Suffer Third Major Erosion Event in a Month
The extreme weather that has inundated the Sydney, Australia area
By Olivia Rosane