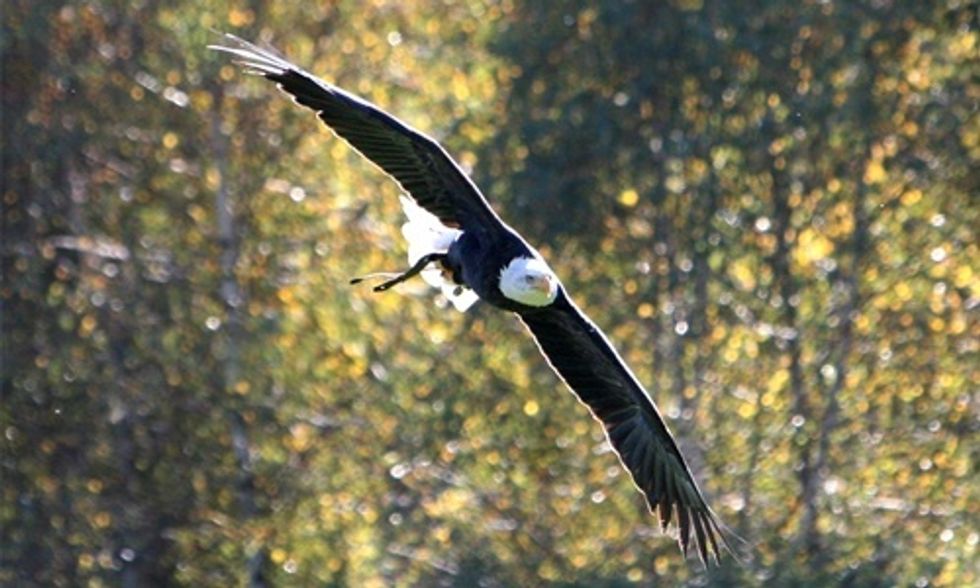 Some of North America’s birds may no longer be at home on the range. More than half of 588 studied species could lose more than 50 percent of their flying, breeding and feeding space before the end of the century—because of climate change.

The bald eagle, iconic bird of the U.S. is among the North American species threatened by climate change.
Photo credit: Softeis via Wikimedia Commons

The researchers who discovered the precarious future facing so many species say they were shocked to find that rising temperatures could have such widespread effects on the continent’s birds.

The finding comes from one of the world’s most distinguished ornithological bodies, the U.S. National Audubon Society.

Gary Langham, Audubon’s chief scientist, and colleagues report in the Public Library of Science journal PLOS One that they used mathematical models and results from two long-established annual surveys in the breeding season and in winter to estimate future geographic range shifts.

The research was based on huge amounts of data. The society’s Christmas Bird Count has been continuous since 1900, and provides a good estimate of numbers in those species that overwinter.

And the North American Breeding Bird Survey, a systematic study conducted between mid-May and July in the U.S. and Canada, involves tens of thousands of three-minute counts of every bird seen or heard at 50 stops along a 39-kilometer route.

The scientists also used three different climate change scenarios—as carbon dioxide levels rise in the atmosphere because of fossil fuel combustion, so the planet’s average temperature rises and climate changes—to explore the possible futures for bird species in a vast landscape that is home to everything from eagles to hummingbirds.

They found that 314 species would lose half or more of their traditional range.

Of this total, around 180 species would find that although they would lose the range they had, they would probably be able to acquire new feeding or breeding habitat, as conditions changed. But for 120, the habitat would shrink altogether—that is, there would be nowhere else for them to go.

The world’s birds are in trouble—and not just on land or on one continent.

One in eight species is threatened with extinction, although in the better-developed nations, there have been systematic attempts to establish conservation measures.

The Audubon study, however, found that the strategies devised and supported now to extend conservation might not be of much use in a world in which climates changed and habitat that had endured for 10,000 years was destroyed, degraded or exploited.

“We were shocked to find that half of the bird species in North America are threatened with climate disruption,” Dr Langham says.

“Knowing which species are most vulnerable allows us to monitor them carefully, ask new questions, and take action to help avert the worst impacts for birds and people.”