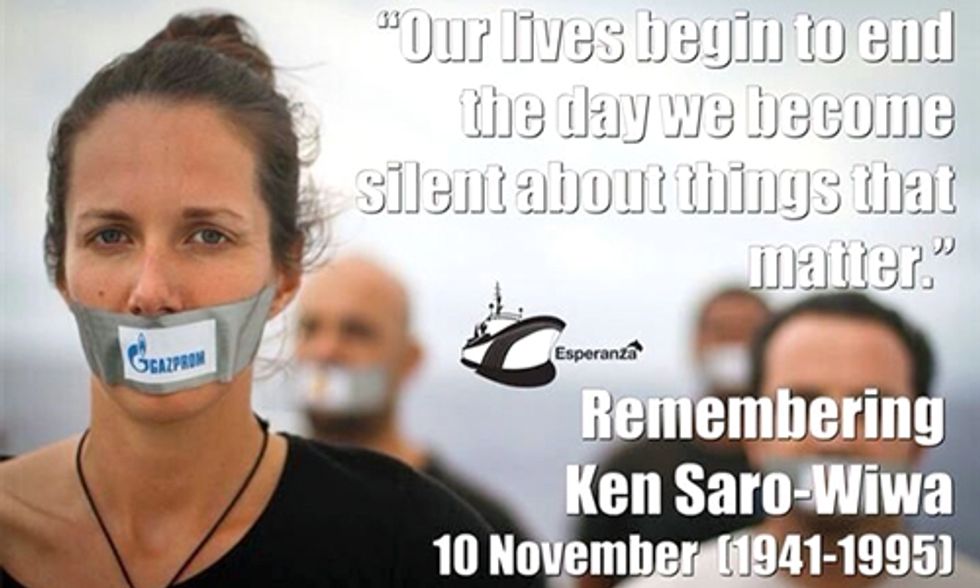 Early November marked the 18th anniversary of the tragic murder of outspoken writer and environmental activist Ken Saro-Wiwa and eight colleagues by the Nigerian government. Saro-Wiwa and the others had waged a long campaign to stop multinational oil company Royal Dutch Shell from drilling in the lands of the Ogoni people in the Niger delta.

Nigerian military harassed and intimidated members of the Ogoni community for years because they opposed Shell’s drilling program. Saro-Wiwa and his colleagues defended their communities and local environment from a notoriously toxic industry. In November 1995, a special court established by the military government illegally detained and tried them on spurious charges. Convicted without due process, they were executed 10 days later, despite enormous international outcry.

Sadly, this is not an isolated occurrence. A recent report by human rights organization Global Witness documents the murders of more than 700 environmental and indigenous-rights activists over the past decade—more than one killing a week, on average. They reviewed databases, academic studies and news reports, and consulted with the United Nations and other international agencies. They found citizens are often harassed, intimidated, beaten up, sexually assaulted and sometimes killed for opposing endangered wildlife poaching, illegal logging, dams and activities of foreign mining companies—including some Canadian firms.

I experienced this reality in 1988 when we interviewed rubber tapper Chico Mendes about his battle to save the Amazon rainforest in Brazil for The Nature of Things. He was assassinated two weeks later. The following year, Kaiapo Chief Paiakan asked me to help stop a dam proposed for Altamira, Brazil. My wife, Tara, and I helped raise $70,000 for a demonstration, and the World Bank was persuaded to withdraw its project loan. Paiakan was then subjected to death threats. We brought him and his family to Vancouver until the danger subsided.

Many instances of persecution and killing have occurred in countries with atrocious human rights records, such as Sri Lanka, Guatemala and the Democratic Republic of Congo. Yet surprisingly, most attacks on environmentalists have been in countries such as Brazil, Mexico and the Philippines, with democratically elected governments, independent judiciaries and other institutions intended to protect their citizens’ rights to voice concerns about the environment without facing harassment, intimidation and violence. These countries have also signed international agreements to protect human rights, like the UN Declaration on the Rights of Indigenous Peoples.

As the recent incarceration of 28 Greenpeace activists and two freelance journalists by Russian authorities clearly demonstrates, human rights are vulnerable at a time when governments aggressively promote the interests of corporations over a healthy environment, and are willing to use heavy-handed tactics to ensure people who disagree don’t stand in the way.

In this latest case, Russian special operations forces arrested the Greenpeace International activists, including two Canadians, Alexandre Paul and Paul Ruzycki, for attempting to hang a banner off the side of an oil rig in Arctic waters. They were peacefully protesting Russian company Gazprom’s plans to drill for oil in one of the most ecologically sensitive regions of the planet, and raising awareness of the consequences of climate change. For speaking out in defence of the Arctic, they were imprisoned for two months under difficult conditions and all but one were only recently released on bail. They now face the possibility of long, harsh jail sentences if found guilty on trumped-up charges of piracy and hooliganism.

Although leaders of the Netherlands, Brazil and Germany called for release of their nationals and other members of the Arctic 30, Prime Minister Steven Harper and Foreign Affairs Minister John Baird have so far been silent. You can sign letters at Greenpeace.ca asking Baird to bring the Canadians home and Greenpeace.org asking Russian embassies to urge their government to drop the charges.

Too often, governments are quick to use excessive force and even pervert the course of justice to keep oil and gas flowing, forests logged, wild rivers dammed and minerals extracted. As the Global Witness study reveals, citizens are often killed, too—especially if they’re poor and indigenous.

We must remember the sacrifices of Ken Saro-Wiwa, Chico Mendes and hundreds of other advocates and defend people’s rights to peacefully speak out for the environment, without fear of intimidation, arrest and violence.