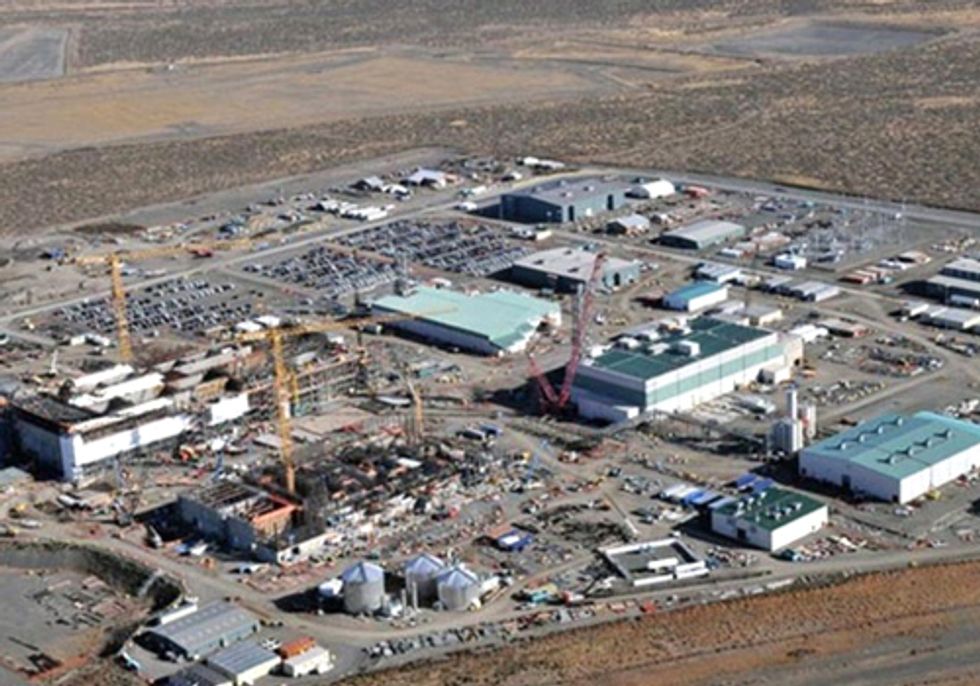 At least a half-dozen more teeter on the brink, which would take the U.S. reactor count under 100.

But can we bury them before the next Fukushima erupts, and the leaks at Hanford destroy the Northwest?

And will we still laugh when Fox "News" says there's more sun in Germany than California?

Wisconsin's fully licensed Kewaunee reactor will now shut because it can't compete in the marketplace.

Florida's Crystal River will die because its owners poked holes in the containment during a botched repair job.

UBS and other financial experts say Entergy is bleeding cash at Vermont Yankee. After blacking out the SuperBowl, Entergy has no problem stiffing a state that has sued to shut its only reactor.

But in the face being crushed by renewables and gas, the money men may finally pull the plug.

The same could happen to New York's Fitzpatrick and Ginna reactors, as well as the two at Indian Point, which need water permits and more from an increasingly hostile state. New Jersey's Oyster Creek, slammed by Hurricane Sandy, and Nebraska's Ft. Calhoun, recently flooded, are also on the brink.

The list of crippled, non-competitive and near-dead reactors lengthens daily. Few are more critical than California's San Onofre Units Two and Three, perched on an ocean cliff in the earthquake-tsunami zone between Los Angeles and San Diego.

More than eight million people live within a 50-mile radius of where San Onofre's owners botched a $600 million steam generator replacement. As radiation leaked, they may have lied to federal regulators, prompting U.S. Senator Barbara Boxer (D-CA) and Representative Ed Markey (D-MA) to demand an investigation.

After being down more than a year, Unit Three will almost certainly never reopen. Unit Two may well stay shut at least through the summer.

If a rising grassroots movement can bury them both, it will mark a huge turning point in a state where renewables are booming with new revenue and jobs.

Which gets us to the Murdochian weather report. A recent "Fox & Friends" was mystified by Germany's popular (and very profitable) decision to phase out nukes while turning to solar, wind, increased efficiency and other Solartopian technologies.

Finally, Shibani Joshi figured it out:  "They're a small country, and they've got lots of sun. Right? They've got a lot more sun than we do."

The staggering laugh line that cold, dark Germany has more sunlight than a nation stretching from Hawaii to California to Florida could come only from an industry at dangerous odds with the planet on which it malfunctions.

This latest stretch of shut downs does not mean the death of the industry. Both Georgia and Florida are being assaulted with legislation that would allow utilities to build new reactors while ratepayers foot the bill.

And some activists concerned about global warming still dream of carbon-free reactors they hope might someday alleviate the situation.

But they miss the reality that such plants will likely never exist. Every promise this industry has made—from "too cheap to meter" to "reactors don't explode" to "radiation is good for you"—has turned toxic.

They also forget that a fragile pool laden with enough fuel rods to poison countless millions still sways 100 feet in the air at Fukushima. It remains horrifically vulnerable to seismic activity that could send it crashing down to a permanently contaminated earth.

All this happens as a horrific brew of radioactive sludge makes its way toward the Columbia River. Anyone who doubts the lethal legacy of the atomic industry need only look at the 177 giant tanks at the Hanford Nuclear Reservation now leaking some 54 million gallons of toxic sludge. These wastes were created by atomic bomb production starting some 70 years ago, and still there is no firm idea what to do with them.

According to leading expert Robert Alvarez, the residues stored in Washington State have been eating through tanks there with no solution in sight. A proposed processing reactor to help deal with it all is estimated to cost at least $12 billion, if it ever gets finished—with no guarantee it will work. The overall clean-up could run more than $70 billion, says Alvarez, requiring technology that still must be invented. It's a project on par with putting a man on the moon, he says. Meanwhile new reports indicate the leaked poisons are migrating into the ground water just 10 miles from the Columbia, threatening to irradiate our precious Northwestern watershed.

Overall Hanford bodes badly for a commercial industry whose back is dangerously to the wall. We know it will squeeze every last cent from these dying reactors with less and less care for safety, especially since the federal government still insures them against the financial consequences of a major catastrophe. Every day they operate heightens the odds on something truly apocalyptic to follow in the wake of Three Mile Island, Chernobyl and Fukushima.

Meanwhile they continue to spew out huge quantities of heat and waste. They divert precious capital from the proven green technologies that are now revolutionizing our energy economy in the only ways that can possibly save us from climate chaos.

This may yet become the first year in decades that the U.S. has fewer than 100 operating commercial reactors. It will also be the biggest year worldwide for the booming Solartopian industries that are transforming how we get our energy, create our jobs and grow our economy.

Lets just make sure we win that transition before the next radioactive disaster does its worst.