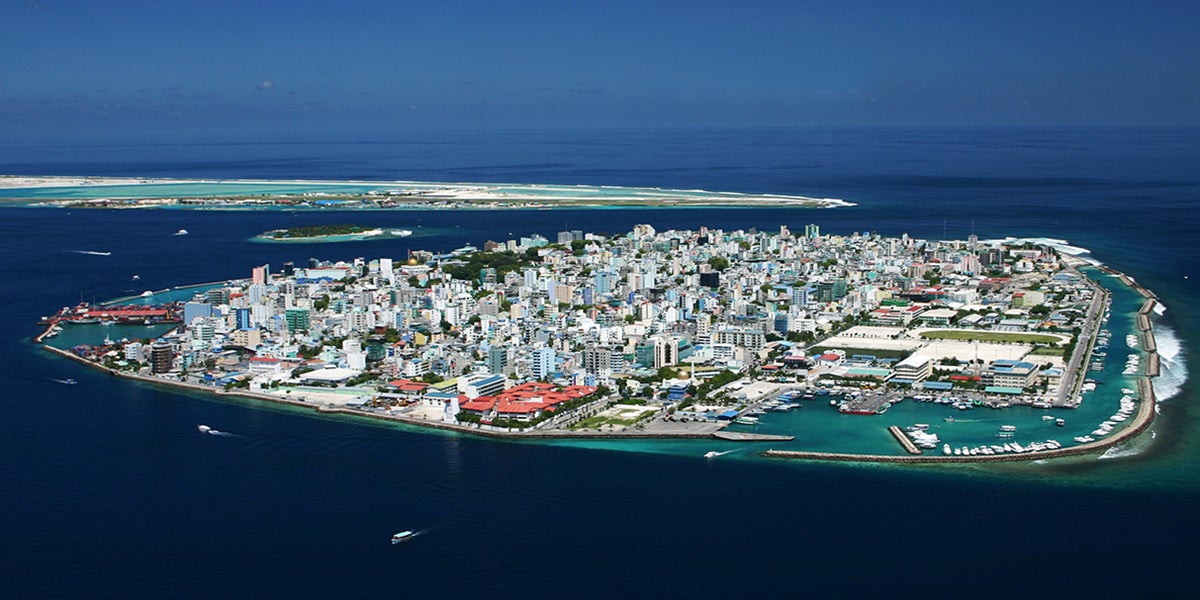 For atoll dwellers across much of the world, the island freshwater on which they depend may be in jeopardy within a couple of decades.

The combination of sea level rise and ever more extreme storm conditions—each a consequence of global warming and climate change—could make many of the world’s coral atolls uninhabitable within one human generation.

Although many of the low-lying islands of the Indian and Pacific Oceans are 2 meters (approximately 6.5 feet) above sea level, and although in the gloomier scenarios sea levels will rise a meter by 2100, the freshwater resources of such islands are likely to be polluted by the invading seas by about 2050, according to new research.

Worldwide, there are thousands of inhabited atolls and cays, with reaches of coral above the reef waterline long colonized by vegetation, to provide shelter for birds, small animals and people.

But as the icecaps and glaciers melt, in response to ever greater greenhouse gas emissions from factory chimneys, power stations and vehicle exhausts, to drive up the planetary thermometer, more freshwater will flow into the oceans, which will anyway expand as temperatures rise.

And since global warming is likely to be accompanied by greater extremes of tropical cyclone and windstorm, islanders everywhere will become increasingly vulnerable.

U.S. scientists report in the journal Science Advances that they decided to look in fine detail at the consequences for one group of atoll-dwellers on Roi-Namur, in the Kwajalein atoll in the Republic of the Marshall Islands.

There are around 1,100 low-lying islands in 29 atolls in the group, and these are home to hundreds of thousands of people. But not, possibly, for much longer.

The researchers considered the projections for gradual sea level rise but focused also on the dynamics of waves as the seas continue to rise, and as ever higher waves driven by ever more energetic storms wash over the low coral structures.

And as these waves batter the coral above the high tide line, so does the likelihood grow that brine will get into the bedrock and poison the natural bedrock aquifers filled with rainwater on which the islanders rely.

Coast-dwellers and people of the lowest-lying islands have the most to lose from climate change, starting with the ground on which they live. Sea level rise has already been identified as a threat for one small settlement off the coast of the U.S. mainland, and future sea level rise could threaten many in the wider Pacific and sweep away tourist investments in the Indian Ocean.

Such findings matter not just for the Marshall Islanders: there are settled atolls in the Caroline, Cook, Line and Society Islands, in the Maldives, the Seychelles and the Hawaiian Islands. All could be vulnerable.

“The tipping point when potable groundwater on the majority of atoll islands will be unavailable is projected to be reached no later than the middle of the 21st century,” said Curt Storlazzi of the U.S. Geological Survey, who led the research.

The damage from flooding to the islands’ homes, stores and workshops, combined with the loss of freshwater, will start to make human habitation difficult in many such islands by between 2030 and 2060, and go on doing so.

Either the islanders must find the money to secure their water supply and protect their homes, or they must abandon their homelands. What oceanographers call overwash—the great waves that occasionally splash right across the narrow atolls—will become more frequent, and more damaging.

“The overwash events generally result in salty ocean water seeping into the ground and contaminating the freshwater aquifer. Rainfall later in the year is not enough to flush out the saltwater and refresh the island’s water supply before the next year’s storms arrive, repeating the overwash events,” said Stephen Gingerich of the USGS, a co-author.

A Tiny Island Used as a Nuclear Dumpsite Is About to Be Submerged by Water https://t.co/1vaNq6IHbA @StopNukePower @nukereaction