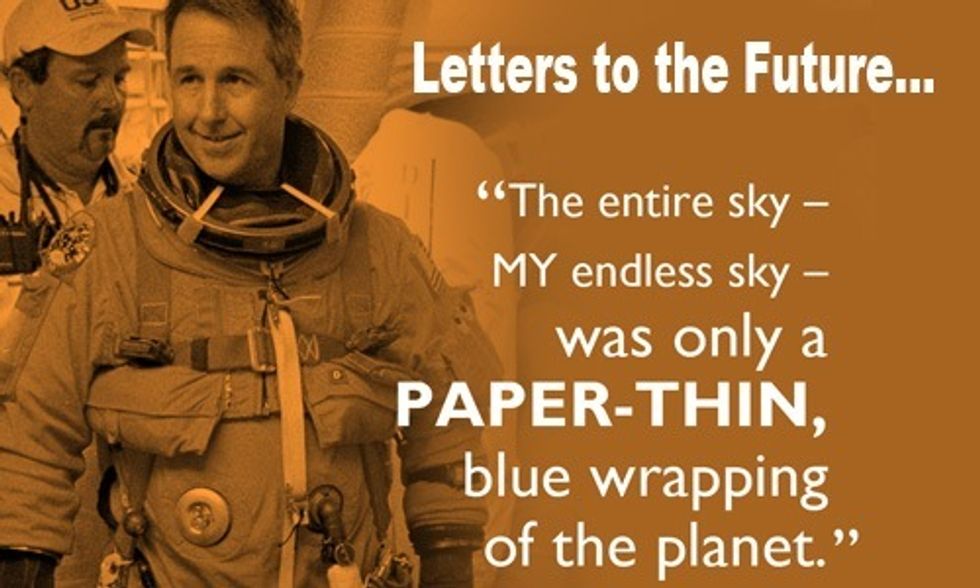 This letter to the future by Stephen Robinson is part of the Letters to the Future campaign, a national effort to encourage people from all walks of life to write six generations into the future about climate change. The campaign puts a spotlight on the importance of world leaders agreeing to a global climate treaty at COP21 in Paris. Now it's your turn to write a letter to the future.

Back around the turn of the century, flying to space was a rare human privilege, a dream come true, the stuff of movies (look it up), and an almost impossible ambition for children the world around.

But I was one of those fortunates. And what I saw from the cold, thick, protective windows of the Space Shuttle is something that, despite my 40 years of dreaming (I was never a young astronaut), I never remotely imagined.

Not that I was new to imagining things. As you may know, I was somehow born with a passion for the sky, for flight, and for the mysteries of the atmosphere. I built and flew death-defying gliders, learned to fly properly, earned university degrees in the science of flight, and then spent the rest of my life exploring Earth’s atmosphere from below it, within it, and above it. My hunger was never satisfied, and my love of flight never waned at all, even though it tried to kill me many times.

As I learned to fly in gliders, then small aircraft, then military jets, I always had the secure feeling that the atmosphere was the infinite “long delirious burning blue” of Magee’s poem, even though of all people, I well knew about space and its nearness. It seemed impossible to believe that with just a little more power and a little more bravery, I couldn’t continue to climb higher and higher on “laughter-silvered wings.” My life was a celebration of the infinite gift of sky, atmosphere and flight.

But what I saw in the first minutes of entering space, following that violent, life-changing rocket-ride, shocked me.

If you look at Earth’s atmosphere from orbit, you can see it “on edge”—gazing towards the horizon, with the black of space above and the gentle curve of the yes-it’s-round planet below. And what you see is the most exquisite, luminous, delicate glow of a layered azure haze holding the Earth like an ethereal eggshell. “That’s it?!” I thought. The entire sky—MY endless sky—was only a paper-thin, blue wrapping of the planet, and looking as tentative as frost.

And this is the truth. Our Earth’s atmosphere is fragile and shockingly tiny—maybe 4 percent of the planet’s volume. Of all the life we know about, only one species has the responsibility to protect that precious blue planet-wrap. I hope we did, and I hope you do.

After 36 years as an astronaut—with a tenure that included four shuttle missions and three spacewalks—Stephen Robinson retired from NASA in 2012. He is now a professor of mechanical and aerospace engineering at the University of California, Davis.

Michael Pollan's Letter to the Future

Women Speak for Climate Justice in Lead Up to COP21