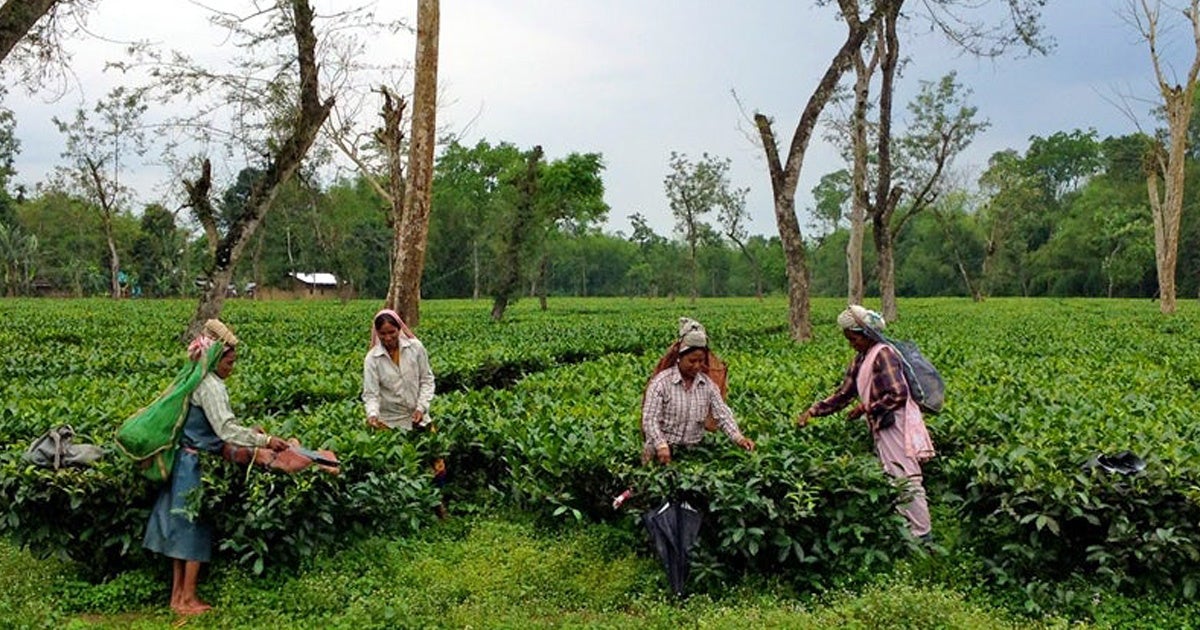 This article originally appeared on Women & Girls, and you can find the original here . For important news about women and girls around the world, you can sign up to the Women & Girls email list.

Pinky Munda, 25, is eight months pregnant with her second child. She lives at a tea plantation in India’s northeastern state of Assam, where her husband is a laborer.

Six days a week, Assam’s tea workers—more than 50 percent of whom are women—have to collect at least 48lb (22kg) of tea leaves to earn 137 rupees ($2.10) for a day’s work, well below the 250 rupees ($3.80) minimum daily wage for unskilled labor in the region. Most plantations have no toilets, no drinking water and no running water. Workers are forced to defecate in the tea bushes and have no way to wash their hands before they go back to picking.

Of the approximately 1,000 laborers working at Ouphulia Tea Garden, Pinky’s husband is one of the permanent laborers, which entitles his family to a house on the estate. But the Mundas’ single-room brick house, plastered with an amalgam of mud and cow dung, doesn’t have a toilet or bathroom.

The Assam region is known around the world for its tea, found in supermarkets and pricy tea boutiques. The tea grown across the state’s 765-odd estates and 100,000 smaller gardens, mostly concentrated in the eastern part known as Upper Assam, contributes more than half of India’s annual tea production of about 1.2 million tons, making it second only to the world’s leading tea producer, China.

But the world’s thirst for Assam tea has also earned the region a far more dismal reputation. Almost a fifth of the state’s population of about 32 million is estimated to be living on tea estates, and most of them are in Upper Assam, the region with the worst maternal mortality ratio in the county. According to the latest national health survey, Upper Assam records 404 maternal deaths for every 100,000 live births—more than double the national average.

Health experts say the high maternal mortality rate among tea garden workers is due to a combination of poverty, malnourishment, and a lack of basic sanitation and healthcare facilities.

The Plantations Labor Act of 1951 mandates that certain basic provisions be offered to plantation workers, including drinking water, separate toilets for men, and women, housing and medical services. But the law does little to guarantee even these basic rights for most of Assam’s tea pickers. Without action from plantation owners and the government, rights activists and tea workers worry nothing will improve. 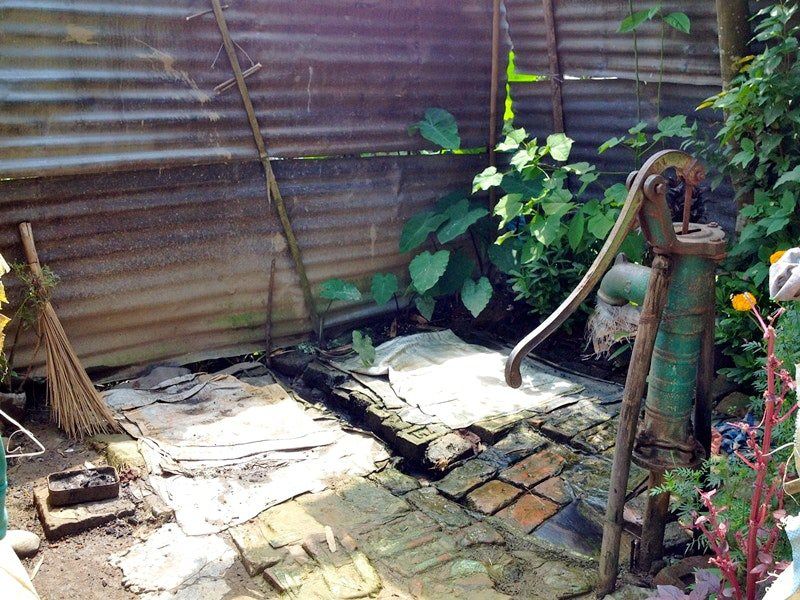 At home, Pinky Munda and her family often drink salted black tea, a vestige of the British colonial era. Colonizers in the 19th century would give laborers salted black tea to help replace the essential salts lost through dehydration. But as each generation born on the plantations produces the next batch of laborers, drinking salted tea has become an everyday habit, even for family members who don’t work in the fields.

Dr. Khalekuz Zaman, a maternal mortality specialist with the Assam government, said consumption of copious amounts of salt by female tea workers is one of the reasons for the region’s high rates of maternal death. “The nutritional intake of adolescent girls is poor on plantations. They suffer from anemia, and due to their regular intake of salted tea they develop hypertension,” he said. “This then becomes pregnancy-induced hypertension or anemia.”

Every week, Pinky gets a free ration of just 6.7 fluid oz (200ml) of milk, one banana and an egg that the plantation’s management gives to pregnant women living on the estate. Every three weeks, she goes to the estate hospital for a free checkup.

The hospital, with its bare-bones facilities, has not had a doctor for the past year. A pharmacist prescribes medicines; nurses deliver the babies. Five to six babies are born at the hospital each month, one of the two nurses on staff told News Deeply. The nurse asked not to be identified because she didn’t have her employer’s permission to speak to the press.

“We look at the ultrasound results and if a pregnancy seems complicated, we take that woman to Assam Medical College for delivery,” the nurse said, referring to the government-run teaching hospital about 35 miles (56km) away.

Uttam Majumder, senior assistant manager at Ouphulia Tea Garden, acknowledges the estate is falling short on hygiene and medical facilities, but said his company is doing all it can. “The hospital here is not good. But all other tea garden hospitals have similar facilities,” he said.

Majumder said drinking water is always available to laborers during their work hours, and every year the estate builds a few new toilets and repairs old ones in workers’ homes. “But workers are habituated to defecating in the open. They don’t use them,” he said. When asked about the lack of toilets for workers out in the fields, Majumder said: “Putting toilets in the field is impossible. If we start doing that we will have to build 100-200 toilets. We are helpless.” 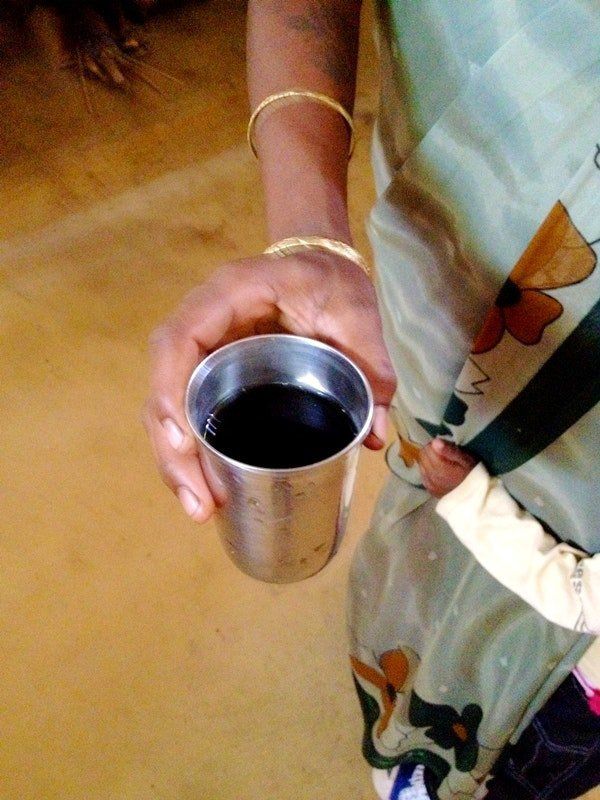 No Place for Pregnant Women

About 30 miles (48km) from Ouphulia, the laborers at Singlijan Tea Estate have similar grievances about toilets and drinking water. Singlijan is owned by M.K. Shah Exports, which supplies its teas to leading international chains such as Starbucks, Twinings and Tetley, according to the company’s website.

“The limited drinking water we get has tea leaves and salt added to it. It stinks at times,” Sangeeta, a tea picker who requested only her first name be used to protect her identity, said. “The groundwater here has high iron content. It changes color and even after boiling looks dirty.”

With no water filters installed in their homes, most of the laborers use a crude contraption that funnels water through a piece of cloth holding sand and crushed bricks, which are supposed to absorb some of the iron. But it doesn’t help much.

“That water is harmful,” Dr. Kotokey at Assam Medical College said. “It can cause neurological as well as abdominal problems.”

When asked to comment on the issues raised by Singlijan tea workers, the manager of the estate directed this reporter to the Indian Tea Association (ITA), an independent body representing the interests of tea producers in India. Madhurjya Barooah, a secretary with the Assam Branch of ITA, did not respond to several requests for an interview, only saying in a brief phone conversation: “MMRin tea gardens is not high.”

But Dr. Zaman said that, “except for a few tea gardens, the management at most have done nothing for pregnant ladies.”

He agrees the government needs to do more and pointed to the recent introduction of mobile medical vans in Assam as a step in the right direction.The vans are expected to travel around tea plantations conducting regular free health checks for tea garden workers.

But Sangeeta from Singlijan plantation said it will take more than new toilets and health checks to improve the lives of Assam’s tea laborers.

“The real problem of tea garden workers is that we are not aware of our rights and entitlements,” she said. “Until that changes, nothing will change for us.”

This story has been updated to remove the description of salted tea as a medical treatment in the colonial era and to clarify that the mobile medical vans have not yet started giving free checkups to tea plantation workers. We have also specified that Dr. Kotokey is the only principal at Assam Medical College and corrected the spelling of Madhurjya Barooah’s name.