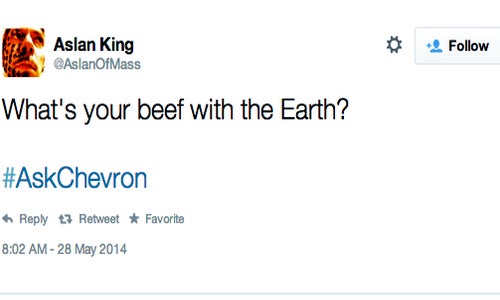 No, Chevron Corp. was not crazy enough to promote the hashtag, #AskChevron. The New York Police Department already showed us all why such a hashtag is never a good idea.

Still, #AskChevron was listed at the top of Twitter trending topics lists around the world Wednesday, the same day as the company’s shareholders meeting. The ridicule the oil giant would experience was not self-inflicted, though—the promotion was purchased by Toxic Effect. The group’s promotion invited a blend of humor, serious questions and statements about the oil and gas corporation’s past blunders and overall lack of care for the planet and the people who live on it.

The hashtag coincided with Toxic Effect’s protest outside of the shareholders meeting in Midland, TX and was rolled out with another hashtag, #WeThePeople. Predictably, Chevron offered no response to the questions or statements from thousands of environmental advocates and Twitter users. Here are some of the tweets we’d like Chevron to respond to:

@Chevron may want to chime in on a hot promoted “#AskChevron” hashtag. It’s getting a bad tweet feed. Say something Chevron.

@thetoxiceffect has a point, why don’t we all #AskChevron why they’re polluting some of the most beautiful land on this Earth?

What’s your beef with the Earth? #AskChevron