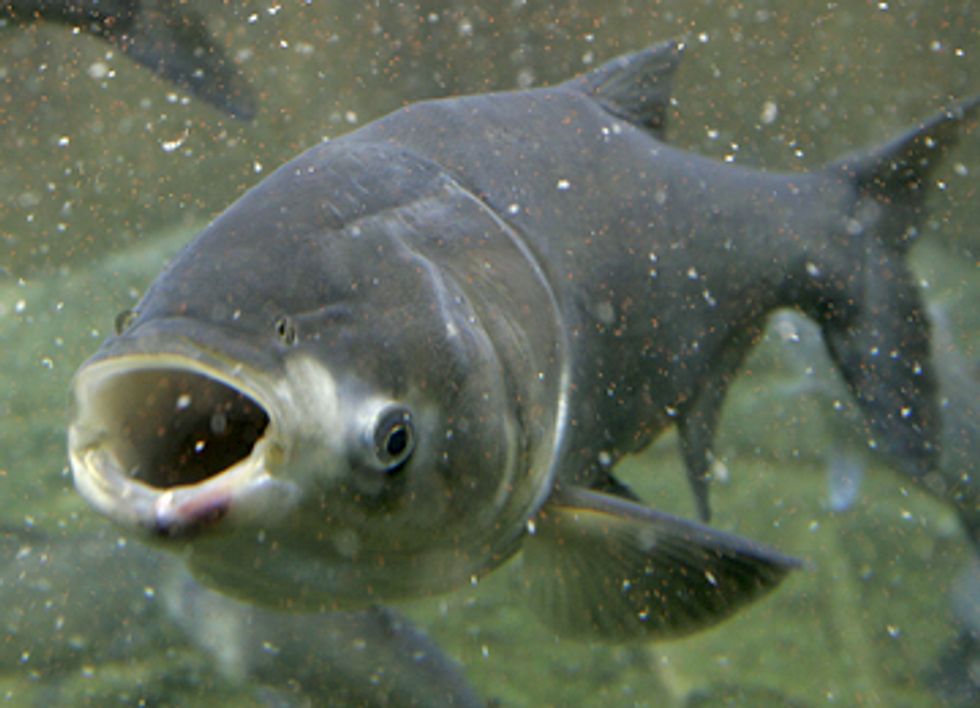 The leading edge of the Asian carp invasion in Illinois has advanced dramatically, with spawning moving nearly 100 miles upstream this year to within 25 miles of an electric barrier that is the last line of defense guarding Lake Michigan and the Great Lakes beyond.

Data collected by the Illinois Department of Natural Resources in June shows that verified spawning of Asian carp—a key indicator of a viable Asian carp population and its ability to out-compete native fish species—has moved to within just 62 miles of the lake.

“The fish are beating a quick path to the Great Lakes and we need federal efforts to keep pace with the threat,” says Joel Brammeier, president of the Alliance for the Great Lakes. “Congress needs to take action now to support a permanent solution to the problem.”

Asian carp, a grouping that includes the notorious bighead and silver species, are invasive species with voracious appetites. The filter-feeders are capable of eating up to 20 percent of their body weight each day in algae and small microscopic organisms. Their rapid growth and intense feeding threaten the base of the food web in waters that they invade. Silver carp are well-known for leaping into the air at the sound of passing motorboats, a behavior that has injured boaters and other water enthusiasts in waterways they have infested throughout the U.S.

"The fact that Asian carp are reproducing, and these reproducing populations are moving closer, makes it even more important that action is taken quickly," notes Cheryl Kallio, associate director for Freshwater Future. “Thousands of citizens in the region have been contacting their members of Congress, calling for fast action on a permanent solution to stop Asian carp. They've had an impact with the Stop Invasive Species Act. We’re one step closer, but it is critical for people to continue reaching out to their elected officials.”

“At every phase of the game, the Asian carp have been underestimated in their advance up the Mississippi and through Illinois on their way to the Great Lakes,” says Natural Resources Defense Council attorney Meleah Geertsma. “We have to get out in front of this invasion once and for all, which means putting in a physical separation to avoid unnecessary environmental and economic damage that comes with these detrimental devils.”

Earlier this year, the U.S. Geological Survey discovered Asian carp have an ability to spawn in waterways previously considered unsuitable, meaning their spawning can occur in shorter, slower-moving waterways and that there are more tributaries that could serve as carp pathways to the Great Lakes than previously thought. The trend of a now rapidly advancing spawning front in Illinois, as well as increased capacity for spawning, is further evidence the Asian carp threat to the Great Lakes is imminent.

Silver carp are well-known for leaping into the air at the sound of passing motorboats.

"This is another urgent indication that the entire Great Lakes region needs to support a physical barrier in Chicago in order to protect our economy, our fishery and our way of life," says Marc Smith, senior policy manager with National Wildlife Federation.

“Evidence of Asian carp breeding much closer to Lake Michigan is an urgent reminder that the clock is ticking on our opportunity to put a permanent solution in place,” said Jack Darin, director of Sierra Club, Illinois Chapter. “Breeding Asian carp near the barrier raises the threat level to Great Lakes. The carp are on the move, and we all need to redouble our work toward a permanent solution before it’s too late.”

The increased threat of Asian carp illustrates the need for a prompt and permanent separation of the Great Lakes and Mississippi River to protect Chicago waterways and the Great Lakes. Lab testing has shown that Asian carp fry—or babies—are far less affected than adults by the charge on the electric barrier that is meant to keep them out of Lake Michigan.

“Fish don’t care about congressional authorization or timetables,” says Robert Hirschfeld, water policy specialist at Prairie Rivers Network. “The half-measures currently in place have not stopped the advance of Asian carp. Congress needs to act now to separate the basins or it will bear responsibility for a devastating blow to the Great Lakes economy.”

“Despite all the effort to understand the problem and stop the advance of bighead and silver carp, at present a fully implemented, permanent solution could still be years away,” said Margaret Frisbie, executive director, Friends of the Chicago River. “With Asian carp on the move and our rivers at risk from dozens of other aquatic invasives already present in the Great Lakes, we need to do better than that and ask Congress to act as soon as GLMRIS is released.”