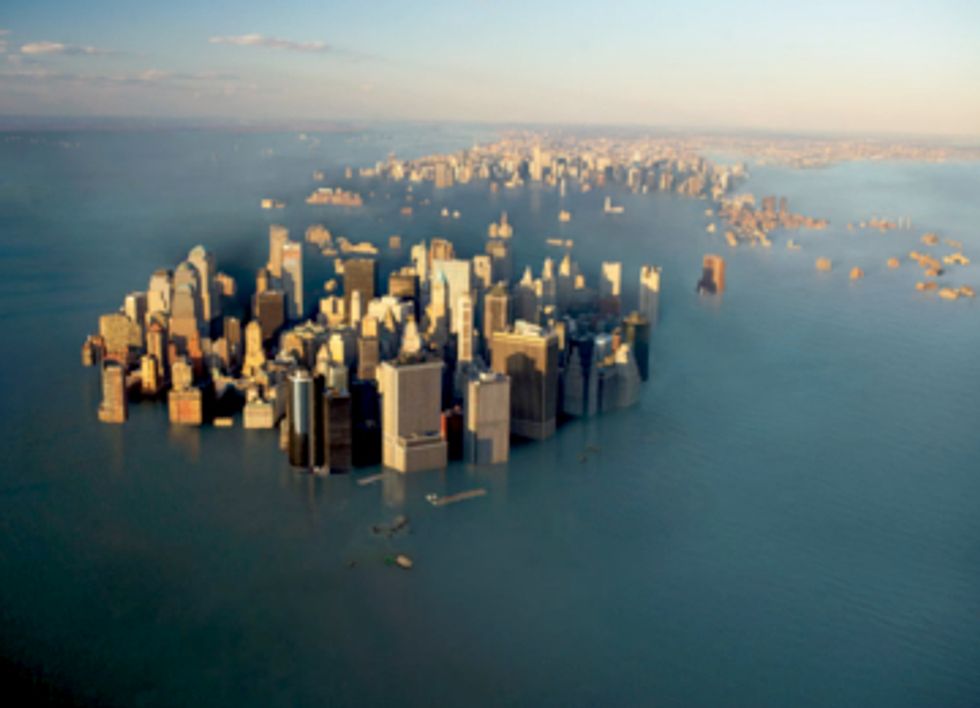 By 2050, flood damage in the world’s coastal cities is expected to reach $1 trillion a year as sea levels rise and global warming triggers new extremes of heat, windstorm and rain.

More than 40 percent of these prodigious costs could fall upon just four cities—New Orleans, Miami and New York in the U.S. and Guangzhou in China.

Stephane Hallegatte of the World Bank in Washington and colleagues looked at the risks of future flood losses in the 136 largest of the world’s coastal cities.

Any coastal city is always at some risk—by definition it is at sea level, and often on an estuary or floodplain, and very often began as a seaport.

But risks increase as the environment changes: some coastal cities are subsiding; sea levels are slowly but surely rising as the oceans warm and the glaciers melt; and for two decades researchers have repeatedly warned that what used to be “extreme” events such as once-in-a-century floods are likely to arrive considerably more often than once a century.

But, Hallegatte and colleagues point out in Nature Climate Change, there is another factor: populations are growing, and even in the poorest nations there is greater economic development. At bottom, for any future disaster, there will be more potential victims, with more investment to lose.

In 2005, average global flood losses are estimated to have reached $6 billion a year. This figure is expected to grow to $50 billion a year, and unless cities put money into better flood defenses, losses could pass the $1 trillion mark.

To make their calculations, the authors matched average annual losses (and in a city like New Orleans, much of it already below sea level, this is estimated at $600 million) against a city’s gross domestic product, to provide a measure of how much should be set aside to pay for such losses.

Both New York and New Orleans have already undergone catastrophic flooding this century, and flood hazard can only increase.

Some cities—Amsterdam in the Netherlands is a classic example—are highly exposed to flood risk, and the once-a-century flood could cost the Dutch $83 billion, but in fact Dutch sea defense standards are probably the highest in the world. Ho Chi Minh City in Vietnam and Alexandria in Egypt have less to lose, but in relative terms both are far more vulnerable.

Prophecies such as these are intended to be proved wrong: the idea is that a prophet warns of horrors to come, people take steps and as a consequence the horrors do not arrive.

But as disaster professionals have learned again and again, governments, city authorities, investors and even citizens tend not to listen to prophecies of doom: scientists and engineers repeatedly described what could happen to New Orleans if it was hit by a powerful-enough hurricane, and in 2005, as Hurricane Katrina arrived, the levees gave way with catastrophic results.

But, the scientists warn, Miami, New York and New Orleans are especially vulnerable, because wealth is high but protection systems are poor, and governments should be prepared for disasters more devastating than any experienced today.

The paper’s authors argue that with systematic preparedness and adaptation, annual flood losses in the great global cities could be cut to $63 billion a year.

Engineering projects can help, but will not be enough, so civic authorities should also be thinking about disaster planning and comprehensive insurance programs to cover future losses.

Since risks are highly concentrated—any city piles millions of people and billions of dollars of investment into a relatively small area—flood reduction schemes could be highly cost-effective.