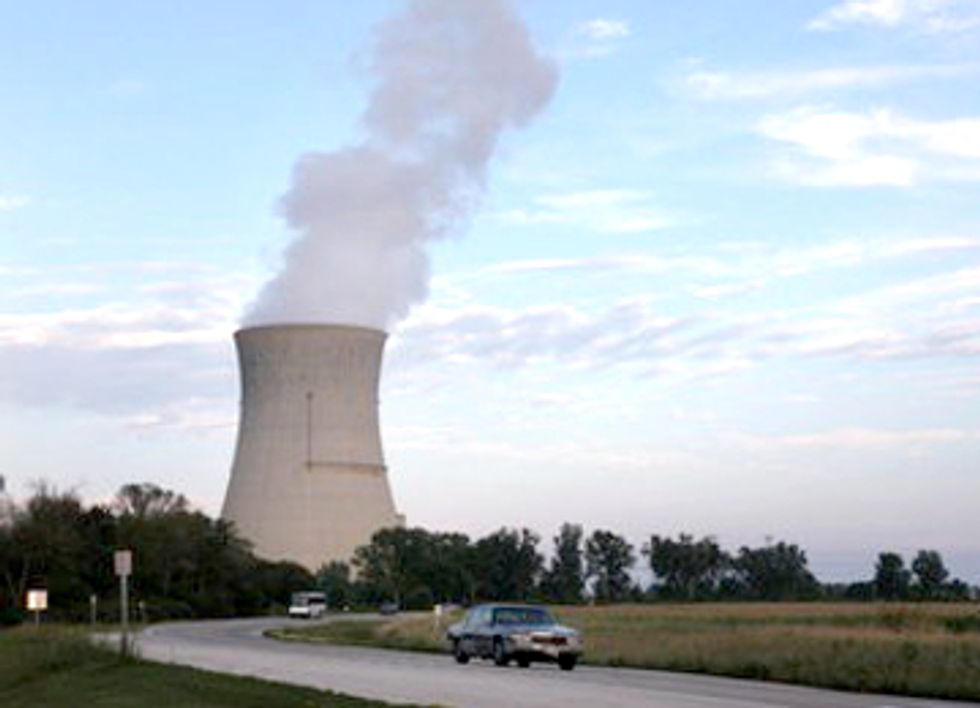 The Davis Besse nuclear generating station in Oak Harbor, OH, on the western shore of Lake Erie is back in the cross hairs after last weeks announcement that the crippled San Onofre nuclear power plant in southern California will remain permanently shut down and be decommissioned. The decision by Southern California Edison came 17 months after major problems with its replacement generators caused a crack in piping and a release of radioactive steam into the environment. A broad based coalition of citizen’s groups, governmental officials and environmental organizations waged an epic battle to keep this threat to the Pacific Ocean and the southwestern U.S. permanently shut down.

The San Onofre victory has bolstered a coalition of citizen’s groups working to shutter the Davis Besse nuclear plant while the plant’s owner and operator, First Energy, is planning to replace the plant’s steam generators in 2014. Davis Besse has come closer to a catastrophic accident on the shores of the Great Lakes more times than any other reactor in the country. More recently it has been discovered that the shield building that houses the reactor containment structure is riddled with extensive cracking.

The main impetus cited for the closure of San Onofre was the Atomic Safety Licensing Board’s decision to hold full public hearings on the license amendment granted for replacement of the generators at plant. The decision to hold these hearings came after national environmental organization Friends of the Earth intervened to call for this important skipped step in public transparency.

"The steam generator disaster at San Onofre, and public attempt to avoid similar bungling at Davis Besse, stem directly from the NRC’s [Nuclear Regulatory Commission] 24 year campaign to deregulate the industry," said Terry Lodge, attorney for the coalition of intervenors calling for a public hearing on the replacement of steam generators at Davis Besse.

"At San Onofre and Davis Besse the NRC relied on the utility’s self-reporting as to whether there is anything significant about this very major feat of building and installing technologically different pieces of equipment. There has been a fiasco in three out of the last three steam generator replacements. ‘Cross my heart and hope to die' regulation is totally unacceptable when it comes to nuclear energy," Lodge concluded.

Arnie Gundersen, chief engineer at Fairewinds Associates, Inc. served as the expert witness for Friends of the Earth in their San Onofre intervention. He is also the expert witness on behalf of Beyond Nuclear, Citizen’s Environment Alliance of Southwestern Ontario, Don’t Waste Michigan and the Sierra Club intervening on Davis Besse. In the case of Davis Besse, Gunderson has declared that the “data reviewed shows that First Energy should have applied for a license amendment with the requisite public review six years ago when replacement steam generators were originally designed, ordered and purchased.”

A cascading failure of steam generator tubes can lead to a loss of coolant accident and reactor meltdown.

The failure of the steam generator replacements came about because they were largely experimental—newly designed systems did not mesh well with older equipment. Gundersen has detailed nine significant differences between the replacement and original steam generators at Davis Besse concluding that “each and every one of these changes is significant individually, and when taken together prove that the replacement contains many experimental parameters.

The coalition contends that First Energy’s shortcut on safety by its circumvention of an NRC license amendment proceeding, risks repeating the same sort of dangerous mistakes made at San Onofre. It was January 2012 when a steam generator tube rupture at San Onofre released radioactivity and led to the discovery of widespread, unexpected tube degradation in replacement steam generators just over a year old. Thankfully, San Onofre will not operate again.

“Once again, First Energy’s indifference to anything but maximum profit dictates the dance,” said Lodge. “What if this new, experimental design doesn’t work out, just as steam generator replacements in the last three reactors have proven to be failures? For First Energy it’s profits first safety last."

The NRC continues to operate like a used car salesman on behalf of the remaining 100 aging and decrepit lemons that threaten millions of Americans living near dangerous nuclear plants in the U.S. Instead of regulating this industry, NRC officials continue to try and paint a rosy picture of this dangerous technology. Just this week in Oak Harbor the NRC held an open house on Davis Besse’s annual performance review.

NRC representatives spoke glowingly of First Energy’s plans to operate 20 years past its life expectancy after its license expires in 2017. When asked by concerned citizens about the risks posed by replacing the steam generators, an NRC representative just tried to brush the question aside by saying “don’t worry, these are the Cadillacs of steam generators.” This begs the question, did the NRC settle for Kia’s at San Onofre and Crystal River?

“The Japanese parliament has concluded that the root cause of the Fukushima Daiichi nuclear catastrophe was not the earthquake and tsunami, but rather the government-regulator-industry collusion that allowed the atomic reactors to be so vulnerable to a natural disaster,” said Kevin Kamps of Beyond Nuclear. “Davis Besse has been the poster child for just such collusion from the very beginning, through the 2002 hole in the reactor head fiasco, and right up to the present.”