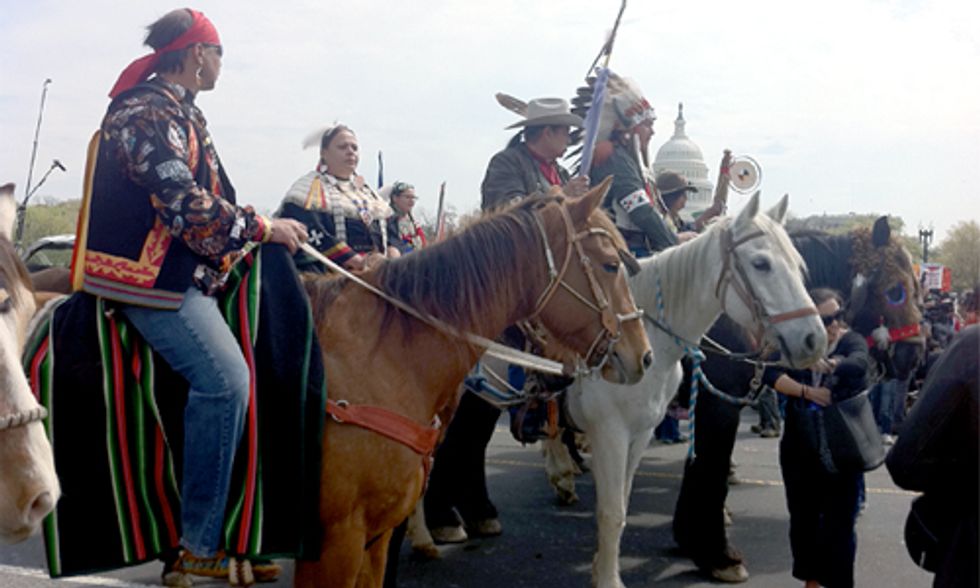 Thanks to the courageous and indefatigable efforts of pipeline fighters everywhere, the tide has finally turned on Keystone XL. As it becomes increasingly clear that Keystone XL's northern leg is not going through, it is time to set our sights on ending all tar sands exploitation.

The Obama administration's latest election year delay on Keystone North is not a victory, but the dominoes continue to fall. Earlier this year, a citizen lawsuit denied TransCanada a route through Nebraska. Last month, it lost its permit through South Dakota. Now it faces a gauntlet of "Cowboys & Indians" vowing to stop it in its tracks.

We cannot let up until Keystone North is vanquished, but all signs point to President Obama nixing TransCanada's cross-border permit after the November elections. Don't just take my word for it.

On April 23, Rolling Stone contributing editor Jeff Goodell wrote: "I was told recently by members of the administration that the pipeline would, in fact, be rejected." On June 18, former Vice President Al Gore wrote in this same magazine: "[Obama] has signaled that he is likely to reject the absurdly reckless Keystone XL-pipeline proposal."

Both pronouncements come on the heels of former President Jimmy Carter pointedly warning the president that Keystone XL "will define your legacy on one of the greatest challenges humanity has ever faced—climate change."

For a president who has suddenly decided to stake so much of his legacy on addressing the climate crisis, approving Keystone North would destroy any shred of credibility on this issue. It would also put an administration that prides itself on outreach to Native American communities in the position of violating the 1868 Fort Laramie Treaty.

Tom Weis, David Lautenberger, Shane Red Hawk and members of his family and tiyospaye (Lakota for "extended family") viewing the 1868 Treaty of Fort Laramie in the National Archives vault in Washington, DC.

I recently had the honor of viewing the Fort Laramie Treaty with Shane Red Hawk and his family in the National Archives vault. There wasn't time to read every word of the hand-written document, but there was time to absorb the meaning of the "bad man" clause in Article I on the faded first page:

If bad men among the whites, or among other people subject to the authority of the United States, shall commit any wrong upon the person or property of the Indians, the United States will, upon proof made to the agent, and forwarded to the Commissioner of Indian Affairs at Washington city, proceed at once to cause the offender to be arrested and punished according to the laws of the United States.

Tribal leaders mounted on horseback in front of the Capitol Building en route to the "Reject and Protect" tipi encampment in Washington, DC.

Because Keystone North would cross treaty territory, its construction would blatantly violate the "bad man" clause, an arrestable offense the Great Sioux Nation will not abide. President Obama knows this because the presidents of the Oglala Sioux and Rosebud Sioux tribes declared on national television their people are "willing to die" to stop it. He also knows this because his senior counselor, John Podesta, visited the "Reject and Protect" tipi encampment on the National Mall in April where this declaration of nonviolent civil resistance was made.

As fate would have it, I found myself standing next to Mr. Podesta at this historic event. I thanked him for his public opposition to Keystone, then asked him to urge the president to use his bully pulpit to speak out against all tar sands exploitation (this includes preventing the tar sands barons from gaining a foothold in Utah's pristine red rocks country).

We should not be doing business with a misanthropic industry that knowingly poisons First Nations communities in Canada, with immoral disregard for its climate impacts on humanity. Fortunately, the U.S. is in a strong position to help starve Alberta's landlocked tar sands beast by stopping the flow of tar sands crossing our border.

Last month, retired Navy SEAL Team 6 Commander David Cooper provided powerful ammunition for doing just that with his warning to the State Department that the Keystone pipeline is highly vulnerable to attack: "We need a serious national conversation about what we do to head off an attack. Until then, I'd offer a saying we used on the SEAL teams: 'If you cannot defend a position, you shouldn't take it'." His threat assessment described as "the most likely scenario" a spill of more than 1 million gallons of "highly toxic" Keystone tar sands oil.

Caution demands that beyond rejecting the Keystone permit, President Obama order national security assessments on all tar sands pipelines crossing our border, and an immediate shutdown of the built-to-spill southern leg of Keystone XL in Texas and Oklahoma.

We need to heed the indictment of the tar sands industry issued by Ponca Nation matriarch and grandmother Casey Camp-Horinek of Oklahoma: "We're suffering from environmental genocide from this extractive industry." The closing ceremony she led on the final day of the "Reject and Protect" tipi encampment was soul-searing. Gathered near the White House, we looked on as she knelt in the grass to pour some sacred water. What poured were her tears. We watched in reverent silence as she cried, and cried. The tears she shed were for all who weep for what is happening to our precious Mother Earth.

No more grandmothers must be made to cry. No more First Nations people must be made to die. The tar sand industry's brutal assault on the human family—and all our relations—must be arrested.

The Keystone XL Video TransCanada Doesn’t Want You to See