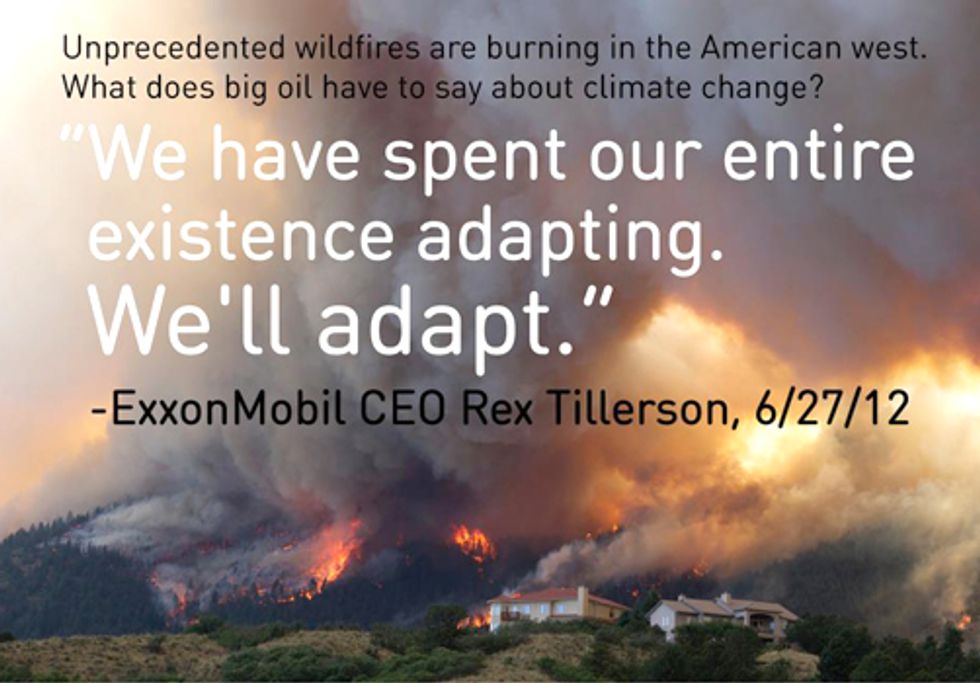 As I write, two million people remain without power in the eastern U.S., two days after extreme electrical storms brought down power lines and trees. They are struggling to remain cool in 100 degree heat.

Meanwhile, after the worst wildfires in Colorado’s history, tens of thousands of people were forced from their homes. The local landscape is a blackened wasteland.

Is this a foretaste of the future? It may be impossible to link these events to climate change, but what we know is that all the predictions are for climate change to usher in an era of more extreme and unpredictable weather. Just like we are witnessing now.

As our weather becomes more extreme, last week the head of Exxon, “T-Rex” Tillerson, said that fears about climate change are 'overblown' and shifting weather patterns and rising sea levels should be considered an engineering problem.

“The fear factor that people want to throw out there to say ‘we just have to stop this,’ I do not accept,” Tillerson said in a speech last Wednesday. He said that climate change was "manageable."

On the one hand this is a predictable view point from the baron who leads the world’s largest oil company. On the other it shows that this particular dinosaur hasn’t changed its spots, nor will it do so.

Tillerson is an oil man and an engineer and it is also therefore predictable that he is proposing adapting to the effects of climate change through engineering methods, rather than attempting to prevent them by eliminating the use of fossil fuels.

Speaking to the U.S. Council on Foreign relations, he said: “Changes to weather patterns that move crop rotation areas around—we’ll adapt to that. It’s an engineering problem and it has an engineering solution.”

She continued: “When Raymond stepped down and Rex Tillerson  took over in 2006, we hoped the worst was over … And yet, the company continued to fund deniers and does to this day. But yesterday, Tillerson stepped right back into Raymond’s old shoes, revealing that the company truly hasn’t changed its thinking. While he doesn’t disagree with the fact that climate change is happening, he thinks we can adapt to it.”

Tillerson’s only problem is that the scientists are telling us we cannot adapt. Climate change is not an engineering problem, where we can spray the oceans with iron or the sky with chemicals to make it rain. We can do these things, but it will not be enough.

Climate change means the rapid decarbonisation of our society. It will mean a radical rethink in how we live, travel and work. The scientists are telling us that the time for tinkering has long gone.

But Tillerson is an oil man, and we should not be listening to him for solutions, because he has none. He only knows one thing, and that is how to drill for more oil.