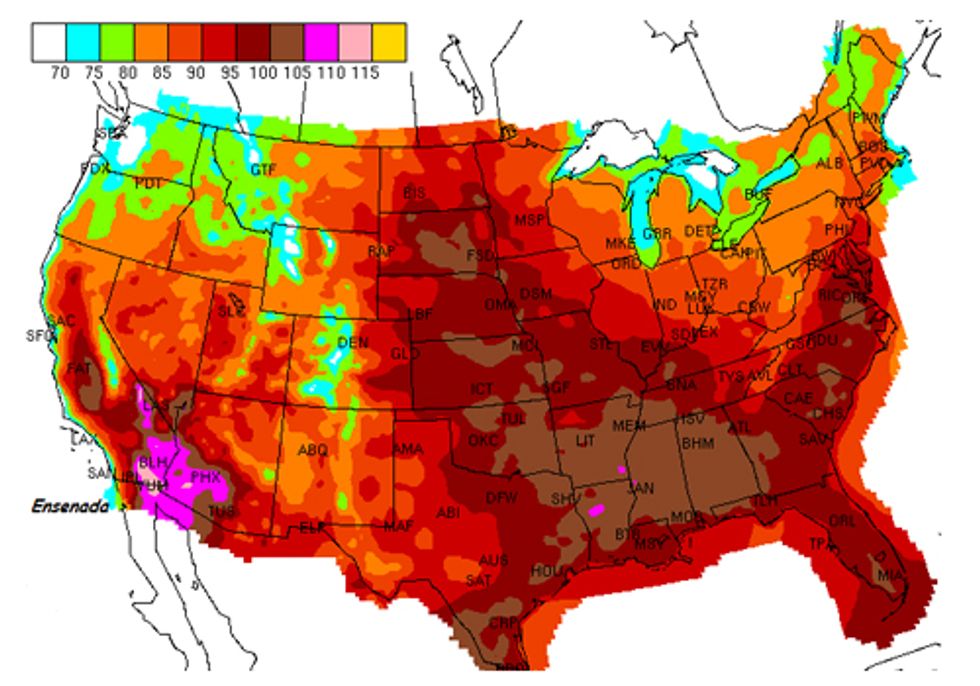 The summer of 2012 isn’t even half over, and already the U.S. has been hit with two crushing heat waves, and in both cases, the searing temperatures have literally been lethal. Public health-workers know all too well that whenever the mercury soars, people die—especially the elderly, whose bodies are less resilient to stress than those of younger folks.

Climate change is only going to make things worse: as the planet warms over the coming century, climatologists project that heat waves will only get worse. That’s on top of a population that continues to age overall, expanding the number of likely victims.

The relationship between heat waves and death isn’t just speculation: it’s about as solid as any scientific finding you can name. A 2006 study by the Centers for Disease Control and Prevention, for example, showed that more than 800 people in the U.S. die from heat-related causes in an average year. When the heat is especially severe or prolonged, that rate rises dramatically. A memorable five-day heat wave in Chicago in 1995 killed more than 700, and a horrific bout of hot weather that struck Europe in 2003 caused at least 35,000 deaths.

Even without climate change, the elderly would be at risk. But research has shown that the steady buildup of heat-trapping greenhouse gases in the atmosphere means that heat waves are likely to come more often, be more intense and last longer as the century progresses. As a result, heat-related deaths will almost certainly go up, and scientists are beginning to grapple with the question of how much.

A recent report by the Natural Resources Defense Council (NRDC) estimated that by century’s end, climate change will lead to more than 150,000 extra heat-related deaths in the U.S., and a 2010 article in Environmental Health Perspectives that looked just at Chicago projected between 166 and 2,217 extra deaths every year during the last two decades of the century.

Most of these deaths, experts universally agree, will hit the elderly especially hard for several reasons. For one, the mechanisms that regulate body temperature tend to be less efficient in people over the age of 65. If the body can’t get rid of excess heat, that can ultimately lead to heat stroke, where internal temperatures can rise to a potentially lethal 105° or 106° very quickly. “If that happens,” said Francesca Dominici of the Harvard School of Public Health, a co-author of the Chicago study, in an interview, “you have to intervene immediately.”

Many older people also have chronic illnesses—cardiovascular disease, lung diseases, high blood pressure—which put the body under constant stress in any case. Add the stress of hot weather and high humidity on top of that, and the combination can lead to heart or respiratory failure. “[Epidemiologists] have really effective models for describing the relationship of heat and mortality,” said Claudia Tebaldi, a Climate Central scientist who co-authored the Chicago study.

Epidemiologists have only recently begun using these models to make climate-related projections, though. “The people studying things were originally interested in the health effects of air pollution,” Tebaldi said. Heat was only relevant insofar as it made air pollution worse—by increasing the levels of lung-irritating ozone, for example. Amidst the generally increasing awareness about climate change, the epidemiologists have now begun focusing on heat alone as a health factor. “It’s still fairly new,” Tebaldi said.

It’s also tougher to make projections for individual cities, because global climate models operate on regional, not local scales. Backward-looking studies, like one on heat-related stroke hospitalizations in Allegheny County, Pa. from 1994-2000, which will be presented at a conference in October, are straightforward, because you can just look up what the temperature was.

If you try to pinpoint future heat waves in a particular city in 2085, different climate models come up with different projections. That’s why the Chicago study points to such a wide range of potential deaths: 166 to 2,217 isn’t precise, but that’s the best the scientists could legitimately do (the NRDC study, by contrast, used just a single model to come up with very precise, but less dependable, numbers).

Dominici, Tebaldi and several colleagues recently got funding to carry out a new study that will do for other major cities what they’ve done for Chicago. Those numbers won’t be precise either, but the range should narrow in future studies as scientists use downscaling techniques to localize projections from global climate.

Hotter weather isn’t an automatic death sentence: more air conditioning and better public education can ultimately keep members high-risk groups out of harm’s way. “There are all kinds of public health interventions we can do,” Dominici said. But all of that will be costly, and given the other costs climate change is likely to impose on the U.S. economy, it will just add to the burden.