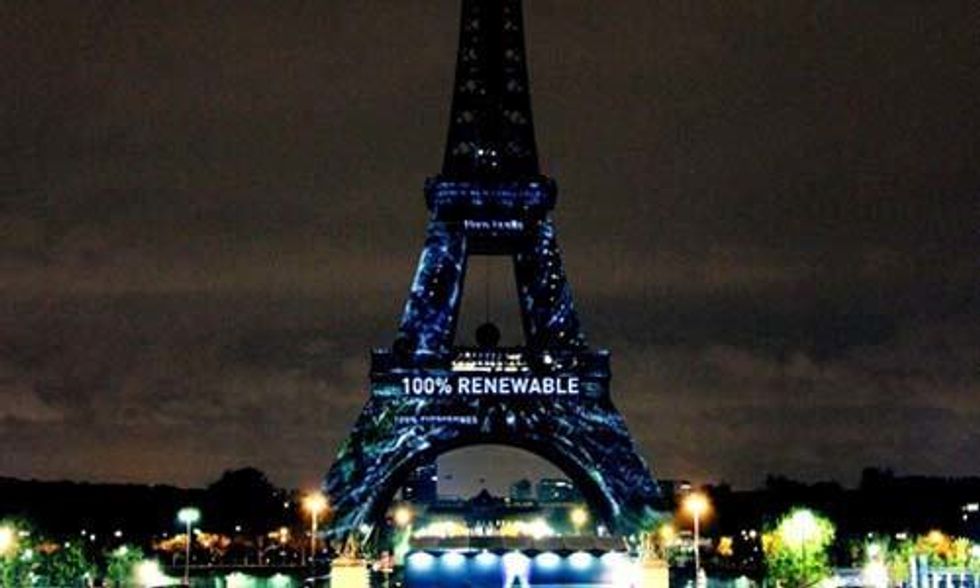 The night before the long-awaited COP21 negotiations in Paris, and the day more than 2,300 climate marches took place around the world, artistic messages advocating climate change solutions lit up the famous Eiffel Tower in Paris.

Created by artist Naziha Mestaoui, the series of inspiring images called for a shift to 100 percent renewable energy and the protection of the world’s forests, and were projected onto the full façade of Paris’s most iconic landmark. The installation, 1 Heart 1 Tree, aims to engage citizens and help drive an ambitious global deal at COP21. Following the Nov. 13 attacks in Paris, the artist also incorporated messages of unity and hope, and the hashtag #NousSommesUnis.

The projection was launched at an event next to the Eiffel Tower on Sunday night, featuring speeches from UN Secretary General Ban Ki-moon, celebrity ambassador Marion Cotillard, and the artist Naziha Mestaoui.

“I created this installation so that people everywhere can realise what is possible if we come together,” said Mestaoui. “We can protect and regrow our forests, we can tap the natural powers of the sun, the wind, the earth and the sea, and we can build a safer future if we go 100% clean energy for everyone.”

Academy Award-winning actress Marion Cotillard, ambassador for and long-standing supporter of 1 Heart 1 Tree, acted as MC for the evening. “I found this artistic, citizen project very inspiring because our climate is in a state of emergency, and this is why we’re all here tonight,” she said.

Global campaigning organization Avaaz joined the event to represent more than 3.6 million people who have signed a petition calling for a 100 percent clean energy world.

"From millions of people in the streets, to leaders in summit rooms, to experts from all disciplines, everyone is calling for one clear answer, the only answer, to climate change: a transition to 100 percent clean energy," Avaaz Executive Director Ricken Patel said. "Paris must commit to it."